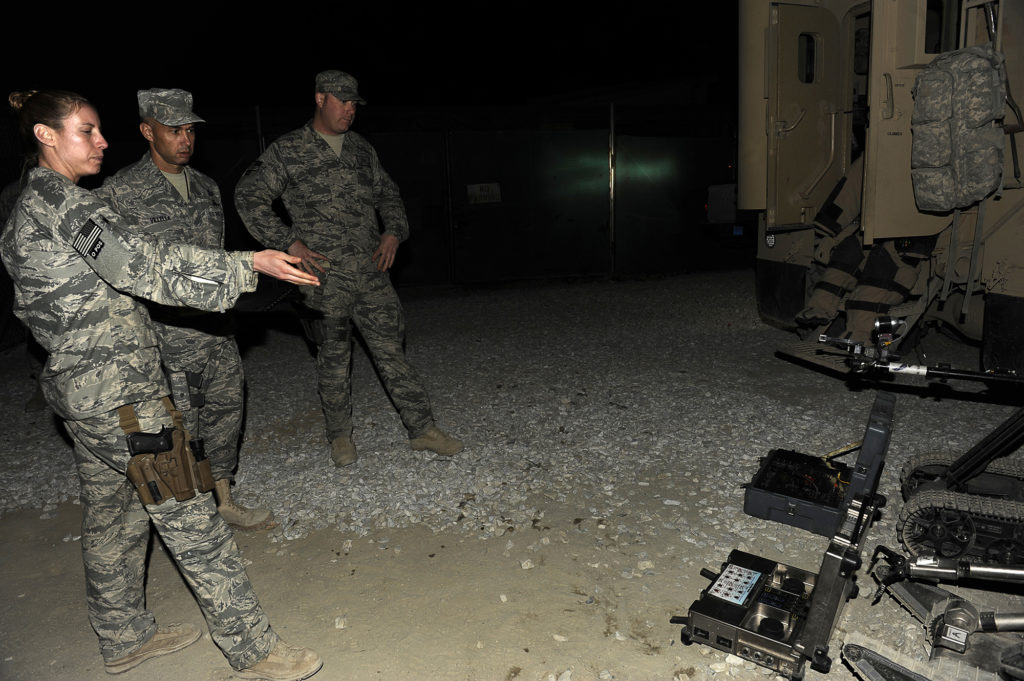 U.S. Air Force Staff Sgt. Elizabeth Butler was one of the few women bomb techs on the Explosive Ordnance Division of the Air Force. She demonstrates a Packbot, a robot that helped her and her team disable IEDs, at Bagram Airfield in Afghanistan on Dec. 29, 2009. (Photo courtesy of Elizabeth Butler)

Most nights when she was deployed in Iraq and Afghanistan, before she fell asleep, Master Sergeant Elizabeth Butler would have the same thought: “I remember just laying in bed and thinking, ‘Thank God my team survived another day.’”

Butler is in the Air Force, but her job has nothing to do with planes. She’s a member of the Explosive Ordnance Disposal (EOD) team. And for five years, from 2006 to 2011, she worked as a technician. It was her job to disarm improvised explosive devices, or IEDs, all with the help of her trusty sidekick, the Packbot.

Packbots may seem like an unlikely hero. They’re petite, clunky, almost cute. Each robot sits on twin tracks, like a crane, and has one long arm. Their tech — in this case, Butler herself — operates them with a controller like in a video game. The tech can stay safely out of the blast range, directing the bots in increasingly complex maneuvers with a consul.

At first, soldiers were wary of entrusting their safety to a robot. But as the Middle East conflicts advanced, it quickly became clear: Packbots saved lives. Lots of them.

The Iraqi military quickly fell following the U.S. invasion in 2003. But the U.S. and coalition forces were beset by a persistent insurgency that had perfected the creation and use of IEDs.

Ellen Purdy led the Joint Ground Robotics Enterprise for the Department of Defense during the Afghanistan and Iraq wars. Her job was to run the collection of organizations that acquired, developed, operated, and supported ground robots. During her career, she also saw, first-hand, what IEDs could do.

“[The Iraqi insurgents] didn’t have the money or time to build tanks,” Purdy says. “So they invented the roadside bomb, and frankly found a vulnerability for us.”

IEDs hit the U.S. military like a penny on a train track. They were cheap, easy to build, and deadly. The military relied on explosive ordnance disposal technicians, men and women sent in with nothing more than body armor and a set of tools. All that, assuming someone was lucky enough to identify the bomb before setting it off.

“At the time,” Purdy recalls, “roadside bombs were wiping us out.”

At their peak, Butler and her team averaged five or six IEDs a day in Iraq. One day, in Afghanistan, she and her team disarmed 11. They’d live out of their truck for days — three soldiers and their PackBot.

Chris O’Donnell, who worked in the Navy’s Explosive Ordnance Division, told me that IEDs killed more people in Iraq and Afghanistan than any other weapon. The next highest cause of casualties? Traffic accidents. But PackBots changed that equation.

There were other military robots before the PackBot, but they weighed hundreds of pounds. The PackBot, at 24 pounds, is both much lighter than its nearest competitor and also more easily transported. (The Department of Defense ordered more PackBots than any other anti-IED robot, but the TALON, a competing robot made by a British company called Qinetiq, is also light enough to carry and is used by EOD technicians.)

Soldiers quickly discovered that the PackBot could be used for a variety of tasks. A natural patroller, the robot can be sent on reconnaissance and surveillance missions. It can climb stairs, travel over mud, rocks, and snow, and be controlled from almost a kilometer away.

O’Donnell credits the PackBot with saving at least 260 lives. “We got the robots back after they got blown up,” O’Donnell says. “We counted them. And we knew how many of them were damaged in a blast.” For every robot damaged, that was one less human casualty.

There’s a phrase used by bomb squads: distance is your friend. But thanks to anti-IED robots, Purdy says, “People’s lives were saved. And their quality of life was maintained.”

“Our first line of defense is robotics,” Butler explains. “It was an extension of ourselves.”

“Pretty much every time I go to a new place or a new unit, someone says to me, ‘Wow, you’re the first female EOD tech I’ve ever met,’” Butler says. “And I’m like, ‘Yup.’”

When Butler first started training, back at the Air Force Academy, she knew she was in for a challenge. Even the recruitment officer had steered her towards traditionally female military roles: intelligence, medics. But Butler knew from day one that she wanted action.

So when Butler got the EOD assignment, she knew she had to work harder and better than anyone else. She studied the PackBot constantly, coming in on weekends to practice driving the robot. “[Female techs] don’t want to be spoon-fed anything,” she says. “We don’t want to be treated like feeble creatures.”

Every time Butler walked onto a site, she braced herself. Sometimes the lieutenants who called her in would cheer at the sight of her. Others would gawk. Either way, she would always get a reaction. “How you handled the platoon was really make-or-break,” she says. So instead of just thinking about the task at hand, Butler would have to think about how to manage the platoon’s response and then how to disarm an IED.

Butler never complained, but her teammates did. Sometimes after a job — once they’d stowed the PackBot and wiped the gritty, sandy sweat from their faces — they’d pile back into the truck and the first thing someone would say to her was, ‘I wanted to punch that guy in the face.’” She’d shrug it off and head to the next mission.

“I do get asked, ‘Is it harder [being a woman]?’ And of course it is,” says Butler. “But without that bullseye or target on my back, I would never have been able to accomplish what I have today.”

“I don’t think that would have been possible being a male.”

Butler survived three explosions — all in her vehicle, when she wasn’t actively searching for IEDs. In the last one, during her final tour in Afghanistan, both her teammates were injured so badly that neither of them returned to active duty. They received purple hearts. Butler went back into the field.

Butler retired from active duty after four tours. Now, she’s stationed in Maryland, where she’s Section Chief of the Joint EOD Procedures. Before we end our conversation, I ask her if there’s anything else she wants to share about her experience.