‘May tulips grow from your blood’: Of martyrdom and identity in Iran 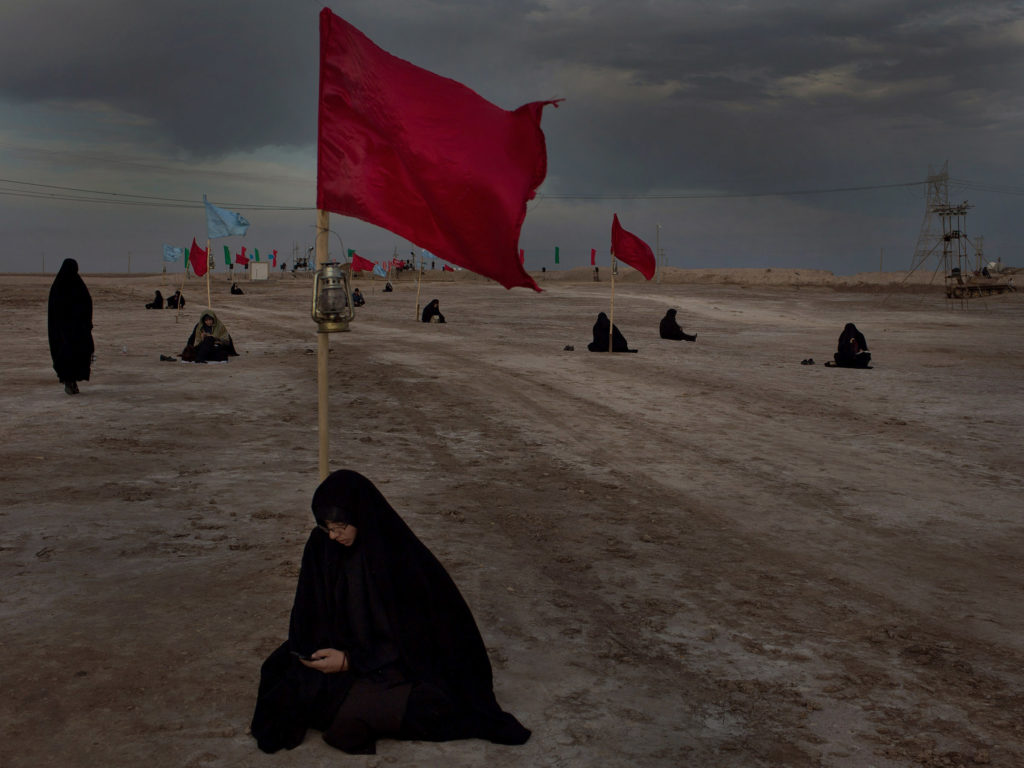 Visitors to the Martyrs' Memorial pray sitting on the earth where fighters are said to have bled during the Iran-Iraq War. (Photo by Kaveh Rostamkhani)

Martyrdom, a religious motif deeply rooted in Shiite Islam, has played a central role in the process of cultural identity establishment ever since the foundation of the Islamic Republic of Iran in 1979. A majority of streets in every Iranian town are named after martyrs. During primary school, pupils are taught about the heroism of martyrdom. Their education includes visiting sites and collective mourning for martyrs’ sacrifices.

The sites of the First Gulf War, officially termed the “Holy Defense,” have been turned into memorial theme parks. It is part of the Iranian collective memory that once children crawled there in mine fields. Now, people visit these parks on sponsored trips to pay tribute to martyrdom.

Four decades after the foundation of the Islamic Republic, Iran is engaged alongside Shiite allies in conflicts around the Persian Gulf and the Levant. Fatalities produced by these conflicts form a new generation of martyrs. Symbolized by red tulips, new martyrs sustain a state narrative of hailing sacrifice to justify hardships for the population. One that claims the Shiite theme of an everlasting battle between “the just against the corrupt” and promises martyrs an eternal place in paradise. Thus, constant conflict, martial aesthetics and martyrdom build the core of a state identity narrative in the Islamic Republic of Iran.

Documentary Photography is a powerful tool to scrutinize The human condition. After years of studying and working as a photojournalist in Europe, I have turned my main focus on my native geography. I think we – media professionals – need to tell more nuanced stories beyond the dramatised and sensationalist dichotomous clichés of the Middle East that have been present in Western Media. They might not be as easy to publish, but they are more important in order to further the understanding of the world.

In my photography I try not to judge my subjects but rather to dig deep, learn and understand what drives them and narrate that through visuals. I might have a strong personal opinion on certain issues, but as a professional I hold it back and let the audience make their own opinion through my narration.

In January this year, following the US-led drone assassination of the Iranian Revolutionary Guards’ Major General Qasem Soleimani, the Middle East was at the brink of another war. How quickly posters depicting the new prominent martyr were distributed and installed throughout the whole country has been very telling about the significance of martyrdom for the state.

Working on the subject since early 2019, I had to travel far to the former battlefields of the Iran-Iraq War. Every spring, thousands of pilgrims go there on partly sponsored spiritual and commemorative trips. The reading is that the earth consecrated with the blood of those children, brethren, sisters, mothers and fathers who lost their lives in the war is holy.

Despite personally not sharing the same sorrow, it has been quite touching to witness women clad in black chadors kneeling and praying at the border of the country where they most likely lost a relative. Such tender moments give life to the idea of the memory of landscape – a visual concept that I decided to substantially integrate in this project. The essay “May Tulips Grow from Your Blood” addresses an omnipresent theme in today’s Iran. Deeply intertwined with the narrative of power and Shia Islam, understanding this cult helps the comprehension of the Iranian politics since the 1979 revolution.

Kaveh Rostamkhani (b. 1989) started his career in photojournalism with an internship at AFP in Berlin. He has studied communication design in Hannover, Germany and Documentary Photography in Newport, Wales. Kaveh has worked with AFP, Der Spiegel, Harper’s Magazine, IRIN News, Neue Zürcher Zeitung, NRC Handelsblad, Politiken, Stern, Süddeutsche Zeitung and Die Tageszeitung among others and has been a contract photographer with the Finnish daily Helsingin Sanomat since 2013. You can see more of his work at www.kaveh-rk.net