The correspondent who exposed the “fake news” of World War One 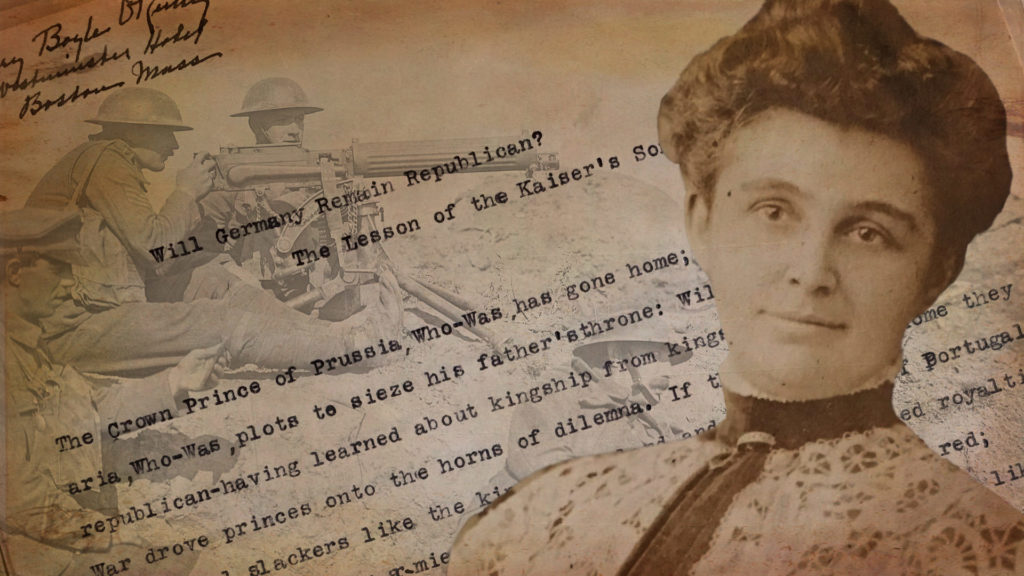 BOSTON – At a time when women in the U.S. were still winning their right to vote, Mary Boyle O’Reilly was on the frontlines of World War One, as a fearless foreign correspondent writing for Harper’s Magazine and The Boston Globe. O’Reilly provided riveting, eye-witness accounts of the war and sided particularly with displaced civilians no matter which side of the trench lines they were on. Her work stood out for its criticism of the jingoistic coverage by British press that too often gave a false impression of the realities of the war and the horrors committed by both sides.

On the 100th anniversary of the armistice that ended “The Great War” on “the 11th day of the 11th month at the 11th hour,” O’Reilly’s  work in the field is memorable not only for the perspective it provided but for the way she exposed propaganda which she called “The Fakes” of the British Empire, or what today might be called “fake news.” Her work has recently been archived at Boston College in the John J. Burns Library, and digging into the old articles carefully curated in plastic and the typewritten diaries for her travels, there was one dispatch in particular that captured the ethos of her work.

The ebbing frontlines of the early war years had pushed O’Reilly and the Allied troops into Loos, France, an epic battle on the Western Front that would provide a dark marker in the war as the first occasion that the British military used poison gas against the Germans.  Both the German and British troops suffered tremendous losses in the battle, particularly the 1st and 2nd battalions of the Irish Guard. As the thunder of the war drew close to the provincial French town, O’Reilly aided in the civilian evacuation to the nearby port city of Calais.

In her journal, she recorded the events:

The world reverberated with the thunder of giant guns. Every few moments the heavens opened and poured down torrents. In all Calais there was not a roof to shelter our homeless heads.  To do our best we bunched the prairie wagons in a corner of the great square and spread tarpaulins. Under this poor shelter, the children nestled like birds…

At about nine o’clock the Little Lame Teacher crawled from a wagon to stand beside me.  Shoulder to shoulder we stood watching… Already the red cross trains were arriving four an hour laden with wounded.  Hundreds of men desperately hurt silently helped each other across the quay to the red cross ships for England. The Little Lame Teacher watched them for some time in silence then said to me: ‘Sister, I want the children to see this.’…

They lined up in the wet dark; obedient and observant.  Their shining eyes turned towards the red horizon. Said the Little Lame Teacher, ‘Mais oui, look there, and listen.  Then turn your eyes to this endless procession of blesses. Observe that you cannot count them. Whole trains full of more heavily wounded are arriving each minute.  Yet we are behind the lines of a great victory. Even more suffering is on view behind the German trenches. I want every girl and boy here to look and listen until he can assure me that he will never forget – even though he live to be a century old.  Then alone, when you know truly the price of victory, will you be able to tell your children the truth about war.’

This November marks exactly one century since the armistice that brought the Great War to and end. It also embarks us on a new series of milestones: the centennials of the post war peace negotiations.

As the soldiers began to withdraw from the frontiers of battle, the world experienced a rare and brief vacuum of peace. Politicians, political scientists, and journalists emerged from the shadows of the military theaters and embraced the opportunity to reflect on the ‘price of victory’ and its impact on the new world that would be created in its wake.

Mary Boyle O’Reilly “I want every girl and boy here to look and listen until he can assure me that he will never forget – even though he live to be a century old. Then alone, when you know truly the price of victory, will you be able to tell your children the truth about war.”

Mary Boyle O’Reilly was one of these many figures continuing to work on maintaining peace in the post-war years. After the war, she too had a moment to reflect on her experiences and compare them to those of the global impressions of the war.  What she discovered was that those who had been only reading about the war from their newspapers at home had been digesting a hyperbolic narrative of the German people for the last four years. This was Mary Boyle O’Reilly’s unique perspective. Coming from strong Boston Irish roots, she observed particularly how the British empire threw its Irish sons onto the frontlines and how Ireland was on the edge of its own civil struggle against the British. Remember, the battle in Loos, France ended just six months prior to the 1916 Easter Rising in Dublin. The backdrop for her writing would have been shaped by Ireland’s revolutionary period and the complex relationship between the Irish and the Germans who were all too eager to help the Irish in their resistance to British rule. Her portfolio in the Boston College archives contains both poems and exchanges with Roger Casement, the Irish nationalist who was executed for leading the effort to gain German military aid in the Easter Rising.

Understanding the legacy of Mary Boyle O’Reilly really begins with her father, John Boyle O’Reilly, a local legend of Boston.  Born in Ireland, the young Fenian was 22 years old when he was shipped to Australia to serve a 20 year sentence for treason against the crown.  Escaping on a whaling boat just 2 years later, he spent nine months at sea before docking in Philadelphia and eventually settling in Charlestown, Massachusetts.  Throughout the Boston area, Boyle made a name for himself as a poet, author, and journalist. In 1872, O’Reilly married Mary Murphy, a Boston-Irish journalist who wrote for the Young Crusader under the pen name Agnes Smiley.  One year later, their first daughter, Mary, was born.

Mary Boyle O’Reilly began her writing career at Harper’s Magazine and later moved to The Boston Globe where she gained notoriety for her undercover work exposing the ‘baby farms’ of New Hampshire and the exploitation of the food canneries workers in New York.

After the armistice was signed, O’Reilly worried that the British propaganda, originally intended to coax the US into the war during the early years of battle, would lead to the implementation of a punitive peace that she and many others believed would only aggravate the high tensions of the post-war nations.  For this reason, she worked tirelessly to expose what she called ‘The Fakes’ of British propaganda. In one essay titled, “The Fake of ‘The Cut Off Hands’” she disproved the myth that German soldiers had mutilated, and even made ‘meat pies’ out of Belgian children and nuns. In another essay, “The Fake of ‘The Kaiser, the Baby Killer’” she unveiled the unequal press coverage of the accidental German bombing of a British school compared to the starvation of the German civilians as a result of the British blockades, or the starvation of Indian civilians as a result of the British seize of the nations’ food supplies to aid the Allied troops. The consequence of these actions, she explained, was the death of over 20 million German and Indian civilians.

From today’s perspective these essays can seem morbidly apologetic to a nation that committed some of the worst human-rights violations of the 20th century.  However, when they are examined from the perspective of the inter-war years they carry a lesson that still rings true one century later. That being, ‘the price’ that nations have to pay to achieve ‘victory’ often far outlasts and outweighs the actual ‘victory’ itself.

Will Sennott, a History major at the University of Massachusetts in Amherst, is an intern for WGBH’s Celtic Sojourn.