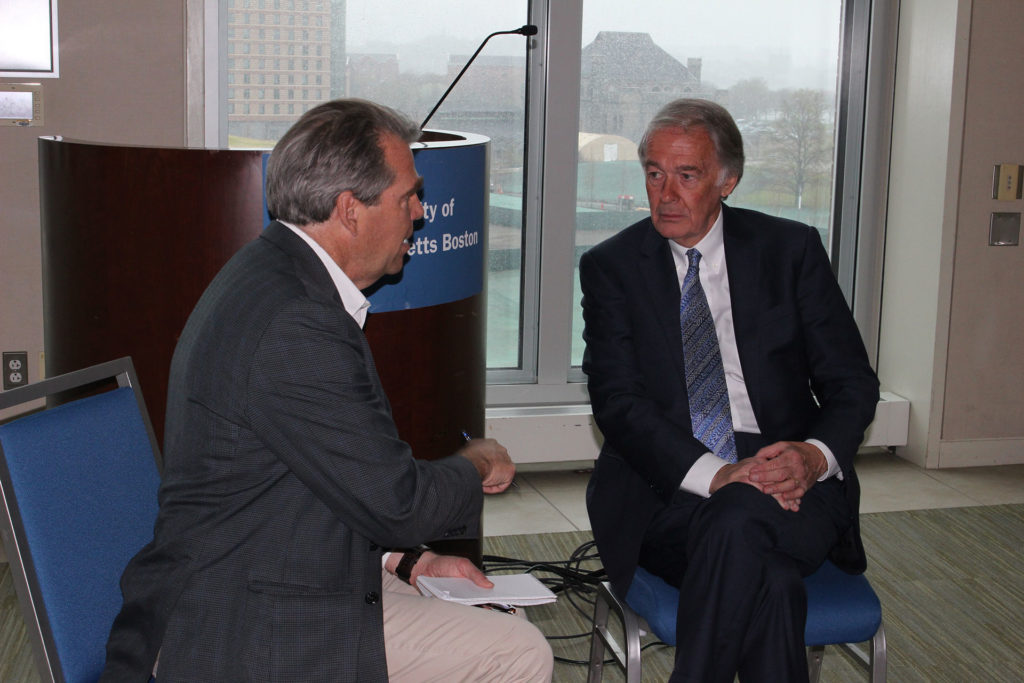 “Climate change is the national security, economic and moral challenge of our time,” Markey, a Massachusetts Democrat, told a packed auditorium at the University of Massachusetts, Boston on Monday.

Despite the “existential threat” that climate change presents to the planet, Markey offered a way for the country to come together to confront the peril through the legislative proposal he sponsored known as the Green New Deal.

The bill, co-sponsored by Rep. Alexandria Ocasio-Cortez (D-NY), calls for the creation of millions of jobs in the US by building resilience against climate-change-related disasters; repairing and upgrading infrastructure; setting a goal to reach 100 percent of power demand through clean, renewable energy sources; and upgrading all existing and new buildings to achieve maximum energy efficiency.

The Green New Deal resolution has been embraced by environmentalists as a transformative way forward, and trashed by critics as wildly expensive and naïve. The proposal, which claims it will achieve net-zero greenhouse gas emissions in ten years and create clean energy jobs, technologies and infrastructure is repeatedly and sharply criticized by Republicans who have dismissed it as heavy handed and impossible to implement.

David Cash, Dean of the John W. McCormack Graduate School of Public Policy and Global Studies at UMass Boston, asked Markey about this steady drum beat of criticism and about what the future would look like if the Green New Deal was passed.

In answering, Markey painted a picture twenty years from now of “a world that will be transformed in a very real way.”

He described it as a world “where we will have reinvented the way in which we generate electricity, [reinvented] the vehicles we drive, the homes we live in, and the buildings we work in.”

“We can save all of creation through mass job creation,” Markey added, echoing a refrain he has used before in describing the goal of the Green New Deal.

And he said his critics have persistently sought to tarnish the whole approach of the New Green Deal as “socialism.”

“All we want are the tax breaks for wind and solar that the oil companies have had all along.”

“If that’s socialism, give us some of that socialism.”

Despite the persistent criticism of his proposal, Markey said the bill has already had an impact on the presidential campaign, forcing each of the Democratic candidates to have a clear policy on how they plan to address climate change.

That means more voters’ eyes are turning to President Trump and asking about the White House policy on climate change, Markey added, beyond a consistent denial of scientific data and an unquestioning support for the fossil fuel industry and its political lobbies which have thrown their considerable weight behind Trump.

“If Trump is re-elected, it is almost a death sentence for our planet,” said Markey.

He pointed to Boston Harbor in the distance and said, “You are right here at the scene of the crime. You are eyewitnesses.”

He added that the melting of Arctic sea ice is increasing dramatically and contributing to rising temperatures in the Atlantic Ocean as well and that evidence of the rising sea levels that result are in evidence right here in Boston Harbor.

According to a 2018 report from the City of Boston, the pace of relative sea level rise in the Boston Harbor, understood as the difference between the sea surface elevation and the land surface at an specific time and place, is increasing. In the entire 20th Century, the sea level on the Harbor rose about nine inches. The report indicates that by 2030, the sea would have rose another eight inches and by 2050, it would be 1.5 feet higher than it was in 2000.

In the face of these challenges, Markey said it’s time to work together to stave off the impacts of climate change.

And citing U.N. data on the urgency of the situation, he said, the global rise in temperature compared to the due to greenhouse gasses “is an existential threat to our planet.”

“Failure is not an option,” he added.