How marches have transformed over the last 100 years 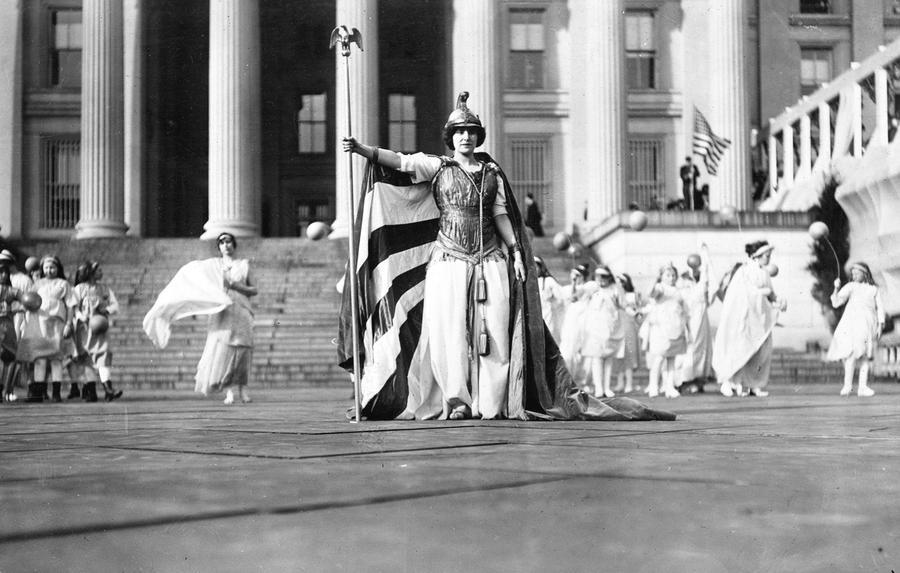 Hedwig Reicher, a German actor, wears a "Columbia" costume during the 1913 Suffragist Parade. (Photo via Library of Congress)

ON JULY 9, 1978, protesters gathered for a march across Washington D.C.’s Constitution Avenue, in what was slated to be a historically large march – organizers expected a maximum of 50,000 people “if the weather [was] nice.” The crowd was calling for an extension on the deadline for ratification of the Equal Rights Amendment and celebrating the life of famous suffragist, Alice Paul, on the one-year anniversary of her death. Yet with only landlines and pamphlets at their disposal, organizers had no way to expect the unexpected: a turnout of over 100,000 protesters, waiting 90 minutes in the hot summer sun for police to block off enough space to march.

Thirty-eight years later, on the day after the election of President Donald Trump, retired Hawaii grandmother Teresa Shook expressed her outrage on the popular Facebook group, Pantsuit Nation: “I think we should march.”

Shook’s post sparked a revolution not different from those of the past, but this time, it brewed on Facebook event pages and in chat rooms, almost overnight and—at first— completely online.

Breanne Butler, a New York City-based pastry chef, was scrolling through her feed when she saw an event for the 2017 Women’s March on Washington, scheduled in just twelve weeks. She reached out to the page’s creator, fashion designer Bob Bland, and asked what she could do to help.

“She was like, ‘Oh my god, I need help desperately, can you start creating Facebook pages for the states so they can mobilize into D.C.?’ So I started doing that, and within hours, I had London, Canada, Switzerland, Norway, Australia, all reaching out,” Butler said.

Butler became the movement’s global coordinator and began receiving thousands of messages per day from organizers all around the world.

THOUGH IT’S THE AGE of instantaneous information, the Women’s March represents a longstanding sentiment: anyone can be an activist. But creating a movement of this magnitude might not have been possible years ago.

“There’s no way that we would have had the global outreach we’ve had if it weren’t for technology and social media,” Butler said. “At least, we would not have been able to pull off so many marches happening all around the world in twelve weeks. It would have been a lot harder to do that in the ‘60s or ‘70s.”

This time around, one of the most obvious differences is an emphasis on intersectionality— an issue that played itself out publicly, online. In the genesis of the march, Baltimore-based activist Brittany Oliver authored a blog post lambasting the organizers for the march’s lack of inclusivity and for appropriating the 1997 Million Women March and the later March on Washington.

“Overall, you all have co-opted the messaging of these two very important historical moments in Black history, and it’s unfortunate because it’s becoming increasingly difficult to preserve Black activism,” Oliver wrote. “Politically, co-opting efforts with ‘ALL WOMEN’ and ‘ALL VOICES’ is merely an attempt to erase the specific needs of people of African descent.”

“We publicly thanked her for writing that,” Butler said. “We still have a lot of learning to do. It’s breaking down those barriers, those walls that have been put up. Especially saying, ‘you know, hey to our Black sisters, our Muslim sisters, our Asian sisters, our Native American sisters, you name it, we might not have been there for you as much as we should have been, but we’re here now. Let’s do this together.’”

The Women’s March now spans from Washington, D.C., to sister cities all over the world, including Saudi Arabia and Iran. The organizers use email, Skype, conference calls and Slack, a digital chat platform, to communicate constantly. Butler alone has over 200 march-related group conversations on Slack, all buzzing constantly with permit requests and logistics questions— a sometimes over-stimulating cloud of confusion.

“I think there have been certain ways that technology complicates things and might actually hurt us in some ways,” she said. “I read the original brochure that was handed out for the March on Washington [For Jobs and Freedom] with Martin Luther King Jr. and it was so simple. It was like, ‘Alright, we’re meeting here, make sure you register your bus, bring two sandwiches, make sure they don’t have mayonnaise because it’s going to spoil, and wear good shoes. Be there.’ And people showed up!”

SOCIAL MEDIA DOES what Syrian scholar Yasser Munif describes as “condensing time and space” — in other words, progress can happen more quickly.

“To organize a march 20 years ago, you would need to organize for a while, go around knocking on doors and get flyers, and the whole old-fashioned way to do it, and that took time,” Munif said. “A social movement that would have required maybe years to form and reach maturation and become something that has impact now takes much less time, because of the way we communicate.”

But even so, Munif calls social media just one tool – it doesn’t materialize into a movement or a march alone.

“It would be a mistake to reduce what’s happening now to social media,” he said. “Sometimes, Facebook revolutions seem like real ones when they are not.”

WOMEN HAVE HISTORICALLY used whatever was at hand to resist the patriarchy, according to historian Alexis Coe.

“Throughout time, people have been able to communicate these very basic ideas without the access we have now – without Facebook groups and without Twitter,” Coe said.

Even in the days when women were encouraged (and expected) to stay at home, equal rights activists found ways to subvert. In a 1905 column for the Ladies Home Journal, former U.S. President Grover Cleveland penned a column urging women to avoid the danger of women’s clubs of the suffragist era.

“We may assume that there are woman’s [sic] clubs whose objects and intents are not only harmful, but harmful in a way that directly menaces the integrity of our homes and the benign disposition and character of our wifehood and motherhood,” he wrote.

This anti-suffragist sentiment was frequently published to proliferate a conservative agenda, but it did just the opposite, Coe said.

“You can imagine some rather dismissive write-up about the suffrage movement in The New York Times being read aloud at the breakfast table by someone’s husband, meant to poke fun at the silliness of women’s attempts for the right to vote,” Coe said, “but to a wife hearing that as she cooks breakfast, that’s accidental activism.”

In the days before President Trump’s inauguration, such ‘accidental activism’ struck again, this time in the form of a trending Twitter hashtag, #RenameMillionWomenMarch. Thousands of Twitter users emerged to ridicule the protest, describing its organizers and feminists in general as “whiners” and “crybabies” who are participating in “an emotional mess masquerading as a political movement.”

But in the same spirit of the suffragettes, activists were quick to respond on Twitter.

“Thank you to all those writing on the #RenameMillionWomenMarch,” comedy writer Nick Jack Pappas tweeted. “It only proves how important and necessary the Women’s March is.”

Even if history repeats itself, today’s changemakers are at least working with a brand new set of tools.