With March for Our Lives, an inclusive youth movement is born 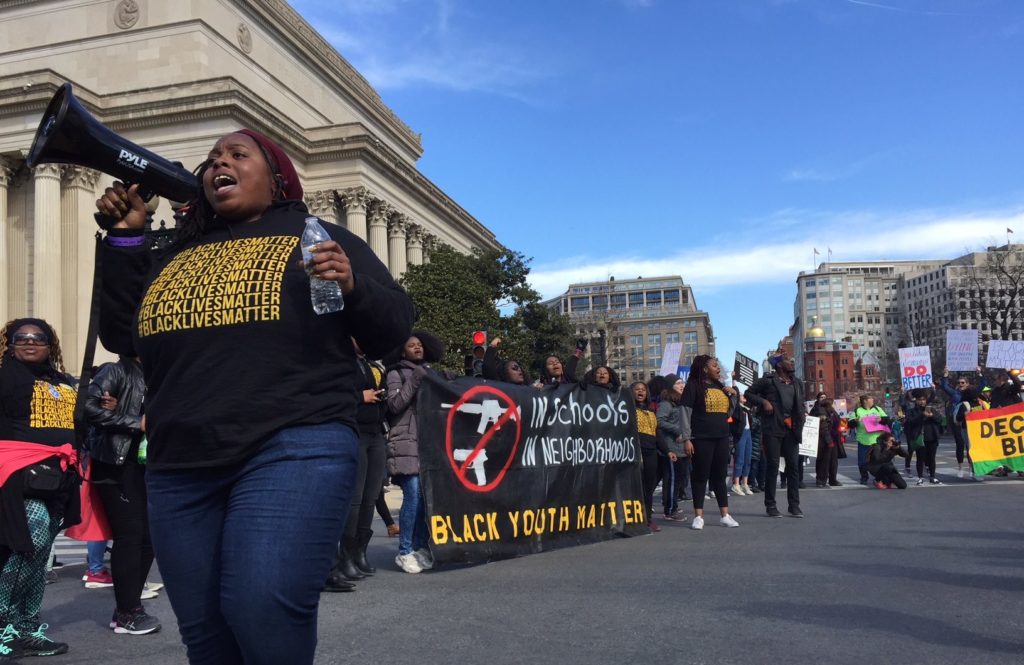 Supporters of Black Lives Matter join an estimated 500,000 marchers at the March For Our Lives rally in Washington, D.C. on March 24, 2018. (Photo by Kevin Grant)

WASHINGTON — DeVontae Gliss shivered in the morning cold as he held a sign honoring his late mother, Tamara, who was killed by a stray bullet that flew into a neighborhood cookout on May 25, 2015.

Nearly three years after her death, 14-year-old DeVontae and his family joined hundreds of D.C. residents including Mayor Muriel Bowser in getting a head start on the March for Our Lives rally, which drew an estimated 500,000 people to the capital’s streets Saturday in support of stricter gun laws.

DeVontae said that the trauma of his mother’s death and the threat of more gun violence in his life makes it difficult to focus in school. But he took heart in the possibility that the March might bring a change.

“There’s a lot of people talking. Maybe our lawmakers will listen to us more than random people,” DeVontae said, breaking into a slight smile. “I mean, we’re random people too, but we’re young.”

With March for Our Lives, teenage survivors of the deadly shooting at Marjory Stoneman Douglas High School in Parkland, Florida have helped to galvanize a national movement that is far from random, harnessing the power of youth as a strength and shaming a graying Congress they say has failed to protect the country’s children.

Since the massacre at Columbine High School made school shootings part of a national conversation in 1999, the prevalent media narrative has tended to draw a line between mass shootings in affluent areas and everyday gun violence in cities like D.C., Chicago and Los Angeles.

March for Our Lives does not. Drawing on the anguish of loss, and hope for a better society, Saturday’s rally offered a master class in welcoming and amplifying the full range of voices affected by gun violence, which claims the lives of more than 36,000 Americans each year. An estimated 1,300 of those are kids.

Trevon Bosley, 19, lost his brother Terrell in 2006 when a robber shot him while walking home from a prestigious after-school academic program in their home city of Chicago.

After memorializing his late brother, Bosley laid into city leaders who he said have directed local funds toward sports and tourism instead of schools and job training programs, feeding an environment in which violence thrives.

“Gun violence is more than a Chicago problem, or a Parkland problem,” Bosley said. “It is an American problem.”

The speakers, which included survivors of mass school shootings like Parkland and those affected by everyday gun violence nationwide, focused on uniting many voices to take effective action — particularly voting for reform-minded candidates in the midterm election in November.

“This is not a red versus blue issue,” said Sarah Chadwick, a 16-year-old Parkland student. “This is a moral issue. And to the politicians who believe their right to own a gun comes before our lives, get ready to be voted out by us.”

Edna Chavez, a 17-year-old from South Los Angeles, hammered the point home. She shared her own story of growing up with the constant “trauma and anxiety” of day-to-day gun violence, then losing her brother Ricardo to a shooting near their family home.

“I learned to duck from bullets before I learned how to read,” Chavez said. “You hear the pops thinking they’re fireworks, but they aren’t. It is normal to see balloons and flowers to honor black and brown youth that have lost their lives to a bullet.”

And marchers like Nick, a 23-year-old D.C. resident marching with a Black Lives Matter banner, wanted to remind the country that race factors heavily into the American response to gun violence.

“I think it’s ridiculous, the rise of mass shootings,” he said. “You have white men running around and not being called terrorists. But gun violence has been happening forever, but people are starting to pay attention. Blacks have been seeing it forever, and whites have finally caught on.”

And perhaps an inclusive, youth-led movement like March for Our Lives was needed to bring together the many victims and potential victims of guns. According to Pew Research, the vast majority of Americans support a number of gun control measures.

In a survey last month, Pew “found broad public support for preventing people with mental illnesses from purchasing guns (89% said they favored it); requiring background checks for private sales and at gun shows (84%); and barring gun purchases by people on no-fly or watch lists (83%). Majorities also expressed support for a federal government database to track all gun sales (71%), banning assault-style weapons (68%) and banning high-capacity magazines that hold more than 10 rounds (65%).”

However Congress has not passed major gun control legislation since 2008, a fact that many marchers pinned on the National Rifle Association, which calls itself “America’s longest-standing civil rights organization” and which spends millions of dollars each year to lobby Congress to maintain citizens’ nearly unfettered access to weapons.

But March for Our Lives is trying to transform the old power dynamic using the electoral process — and by appealing to the hearts of the American public.

Delaney Tarr, a 17-year-old Parkland survivor, laid out the game plan for pressing all current members of Congress to clearly state their positions on gun control, then working to replace those who don’t support reform.

“We will continue to fight for our dead friends,” Tarr said from the stage. “Every day and every moment, we are here to call out every politician to pass legislation. We know what we want, we know how to get it, and we are not waiting any longer.”

This column is part of a series, “Common Ground,” on issues of mutual interest across party lines, written by executive editor Kevin Grant from GroundTruth’s bureau in Washington, D.C.