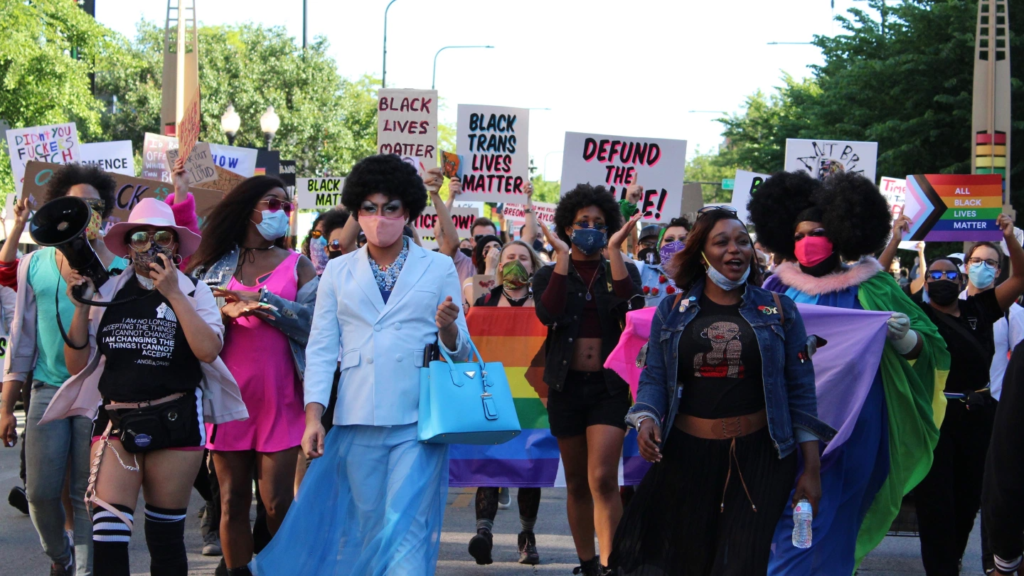 CHICAGO — A sea of protestors, about several thousand strong, flooded the streets of Chicago’s LGBTQ neighborhood one chilly afternoon in June last year.

With each step up North Halsted Street, their chants of “Justice for George Floyd” and “Black Trans Lives Matter” echoed more loudly off the gay bars and LGBTQ centers that line the strip. They waved rainbow and blue-and-pink Pride flags, along with protest signs demanding justice for Floyd, Breonna Taylor and transgender man Tony McDade — all among the 1,039 or so people killed by police in the U.S. last year.

Their leader was Jo Mama, a six-foot-one drag queen in a baby blue pantsuit and afro hairstyle. Mama, who some know as longtime Boystown bartender Joe Lewis, organized the historic protest with nearly a dozen other Black drag performers and transgender people from Chicago.

“Make no mistake: this is a protest and not a Pride Parade,” Mama declared from a pedestal at the end of the march, demanding better for Black queer people in their neighborhood and nationwide.

That Drag March for Change, held on June 14, was part of the national uprisings that followed George Floyd’s murder by Minneapolis police. It also sparked a revolution within Chicago’s LGBTQ community that built on decades-long activism and empowered Black queer people over the next several months.

“Racism is a disease that has infected the entire world, … and one of the ways we can start to correct that is by identifying things that have gone on in our own Chicago queer community here,” Mama said.

From discriminatory dress codes to bans on rap music, Mama and the protest’s 11 other leaders shared stories of their Black, queer experience and outrage over the inequities they have faced within Chicago’s famous “gayborhood.”

“Boystown is one of the most oppressive neighborhoods toward Black LGBTQ folks in the entirety of Chicago,” said speaker Jae Rice, a trans-masculine DJ and communications director for the Brave Space Alliance, Chicago’s only Black- and trans-led LGBTQ service organization.

“You’re able to hide under a mask of queerness and queer oppression while simultaneously perpetuating white supremacy and anti-Blackness right here in Boystown,” Rice said.

Rice also called for the city to redistribute money from its $1.75 billion police budget into social service organizations like Brace Space Alliance.

Meanwhile, 70-year-old lifelong activist Don Bell watched from his window at Town Hall Apartments, an LGBTQ-friendly senior living facility that overlooks the street. A Black gay man from Chicago’s South Side, Bell said his “heart and soul were in the streets” with the protesters as he cheered them on, but he stayed inside to avoid potential coronavirus exposure.

“But I have thrown myself up and down Halsted enough in my lifetime, so I’m happy the youngsters are doing it now,” said Bell, a retired college administrator. “I don’t see today as a new or separate movement from ours in the ’60s and ’70s. It’s a continuation.”

The Drag March was among a series of protests in the North Halsted District that month — and their impact was immediate, with a handful of business managers agreeing to meet with the protest leaders in a virtual, live-streamed town hall to discuss making the neighborhood more inclusive.

Managers from several bars listened as the activists — now a coalition known as the Chicago Black Drag Council — shared their grievances about anti-Blackness and other discrimination they’ve faced in the neighborhood.

“This is a very needed conversation that’s been a long-time coming, and it’s at the point now where we can no longer ignore it,” said drag queen and community leader Lucy Stoole. “It’s up to our community to do what’s right and practice what they preach. We have to take some steps forward to make sure we have a more inclusive and diverse Boystown.”

Fallout from the town hall included the ousting of famous drag queen and show producer T Rex, known out of drag as Benjamin Bradshaw, from hosting at two of the strip’s top bars after several Black performers accused her of harassment, pay inequity and blacklisting queens of color she didn’t personally like.

It also sparked a conversation about whether the neighborhood’s “Boystown” nickname was inclusive of all LGBTQ people, prompting the strip’s business chamber to drop it from its marketing materials.

But most importantly, Mama said in a recent interview, the march and town hall strengthened the sense of community between Black LGBTQ people in the North Halsted district and their allies who support them.

“One person told me, ‘you freed us,’” Mama recalled. “We were all chaining ourselves to the [status quo] in North Halsted, but all we had to do was stand up, be honest, hold ourselves accountable and move forward.”

Since the Chicago Black Drag Council launched in June, the organization has focused on funneling money into Black- and trans-led organizations through monthly fundraisers. So far, the group has raised more than $500 each month for Black LGBTQ mutual aid funds, organizations like the Brave Space Alliance and Molasses, a collective of Black and trans artists that later partnered with the council to offer free self-defense classes to trans women in Chicago.

The Drag Council also partnered with two local gay bars in a makeup drive that collected about $60,000 in supplies, allowing the Brave Space Alliance to open a gender-affirming makeup room for its trans clients.

“This is important to us because if the government isn’t going to fund our services or communities, we want to show our allies where they can help out,” Mama said. “Everyone was looking for ways to help after the Drag March, so we’re giving them something to do and allowing them to connect with our community by supporting us.”

‘We won’t move forward if we stop taking these steps’

Like Bell, the lifelong activist cheering the Drag March on from the sidelines, Mama has made the trek up and down North Halsted Street thousands of times in her life, whether for Pride Parades, heading to work or going out with friends throughout her 12 years in the neighborhood.

It’s the people, she said, who took those steps before her and the thousands of others at the Drag March that made the massive protest possible. The protest, Mama added, was built on movements of the past like the Civil Rights movement and the 1969 Stonewall Uprisings, which placed Black, trans leaders like Marsha P. Johnson at the forefront of the gay liberation movement.

“When I look at Marsha P. Johnson, I see a roadmap to making change happen,” Mama said. “Without her voice and leadership, these marches and protests wouldn’t be possible today.”

The Drag March also built on decades of local organizing against racism within the North Halsted neighborhood, like the few dozen activists who protested the previous summer after a tumultuous Memorial Day weekend that saw two highly publicized racist events.

During that weekend, Dennis Byrd, a gay Black man, was shopping at vintage clothing and costume shop Beatnix, 3400 N. Halsted St., where he found a Confederate flag-styled leather vest hanging near the front of the store. When Byrd confronted staff about the item, the store owner called the police on him.

Drag queen Jo Mama organized the June 14 Drag March for Change. (Photo by Jake Wittich/Block Club Chicago)That same night, in an unrelated incident, a fight broke out at Progress bar, which opened in 2013 at 3359 N. Halsted St. The club has a reputation for being one of the few bars that plays rap and hip-hop music, but the owner argued in a leaked email to staff that because rap was playing when the fight broke out, the genre would be banned going forward.

“This is not a suggestion!! If you play RAP you will not be asked back,” the bar wrote in the email, which was leaked by a staffer and shared widely on social media.

Pastor and community organizer Jamie Frazier, of the LGBTQ-friendly Lighthouse Church of Chicago, organized the June 2, 2019, protest against the two establishments and said they were continuing a decades-long conversation about racism in the neighborhood.

Frazier said the issue goes as far back as the ‘70s, when activists like Pat McCombs protested Augie and CK’s Bar, a now-closed lesbian bar that was accused of harassing women of color at the door by asking for multiple forms of ID for entry.

“These incidents symbolize how some people’s lives are valued above others in Boystown,” Frazier said during the protest.

Author Jason Orne, who wrote about the neighborhood’s history with racism in his book “Boystown: Sex and Community in Chicago,” argued that the racial divide creates a sort of “gay Disneyland” that prioritizes affluent, white gay men over the rest of the LGBTQ community.

This dynamic came to a head in the summer of 2011, Orne writes, when a series of highly-publicized stabbings in the neighborhood led to the creation of a “Take Back Boystown” Facebook group, where many people shared racist posts blaming Black people from other parts of the city for the crime.

“It’s the blacks tearing this neighborhood apart,” wrote one user.

“Most of the drama here is caused by black a-holes who live in other neighborhoods,” another poster wrote, according to Orne.

The Facebook group amassed nearly 2,000 followers, who demanded more cops and a private security firm for the North Halsted strip, according to Orne.

Mama, who remembers being at work when the “Take Back Boystown” protests happened, said these events can inform the fight against racism in the neighborhood today.

“It’s important to know this history because it repeats itself,” Mama said.

That’s why when thousands took to the streets to protest Floyd’s murder, the neighborhood’s reckoning ignited, she said.

“It’s time to clean up the racism within our own community if we want to challenge it outside of North Halsted too,” Mama said. “We won’t move forward if we stop taking these steps.”

Jake Wittich covers neighborhood news and LGBTQ communities for Block Club Chicago. This dispatch is part of a series called “On the Ground” with Report for America, an initiative of The GroundTruth Project. Follow Jake on Twitter: @JakeWittich.