The accomplished dream of a Dreamer 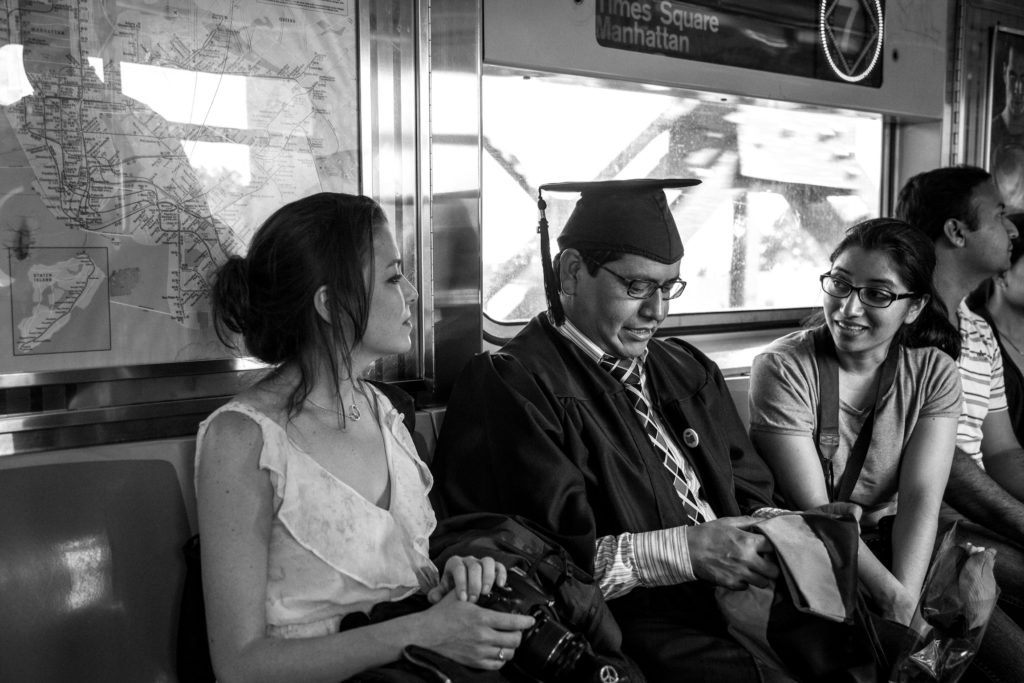 Because of his college degree and community activism, Cabrera became a leader for the Mexican-American community in New York. (Maite H. Mateo/GroundTruth)

An immigrant New Yorker worked hard for 24 years, sought legal immigration status, but was barred from re-entry to the United States.

Angelo Cabrera, 40, immigrated to the United States from Mexico when he was 14 years old. Like many others, he left in search of a better future. Letters between him and his mother promised a return with a college degree.

In his early years, Cabrera worked in places where he was often exploited. Everything changed when he found a better job at a Manhattan deli and met a generous co-worker, who helped him pursue a high school degree. While studying, Angelo worked for 12 years at the deli where his wages topped out at $9.50 per hour. In 2013, he graduated from Baruch College with a master’s degree in public administration.

During his time in the U.S., Cabrera was also a leader interested in improving the community in New York. He founded the Mexican American Student Alliance (MASA), which focused on mentoring and educating Mexican-American students and families in the South Bronx. Through this work, he was awarded the “Rising Star Award” from New York mayor Michael Bloomberg, for his devotion to improving the lives of immigrants.

Shortly after graduation, Cabrera was offered a job at Baruch College as a community and social services specialist. In this job, Angelo would help enroll other Mexican-American students in the City University of New York system. Before he could accept the job offer, he had to travel back to his native country to fix his immigration status.

Cabrera’s plan to return home was risky, but he wanted to apply for immigration the right way. The law in 2014 stated that people who lived illegally in the U.S. for more than a year were prohibited to apply for re-entry for 10 years. Cabrera hoped he would receive a waiver to go back and work under humanitarian purposes.

After 24 years, Cabrera returned home in 2014 to San Antonio Texcala in Mexico. A mariachi ensemble and almost the entire population of his town waited for him at the entrance of the village for a welcoming party. His mother, who had gone blind because of an illness, was there and embraced him.

“A mother never gets tired of waiting for her son,” said Irma Rodriguez. She patted Cabrera’s face trying to imagine what he looked like.

Cabrera waited five months for the American government response for his waiver. His application was denied. Cabrera’s whole world started to vanish, and he was afraid he wouldn’t be able to apply for another visa until 2024.

“I realized I was in a country [Mexico] that I knew very little about because much of my life has been in New York. My home, for 24 years, was and still is NYC,” said Angelo. He felt lost, devastated and unsure about his future.

Cabrera’s story was featured in media outlets throughout the U.S. and Mexico. The press attention helped garner support for his return to the U.S. Daily Kos and Change.org launched campaigns for his case, which attracted over 25,000 supporters including Congressman Joseph Crowley and Senator Kristen Gillibrand. The campaigns called on the Department of Homeland Security to reverse its decision. Shortly after, Cabrera’s case was re-opened and he was issued a waiver.

On March 24, 2016, Angelo arrived at JFK Airport in New York with a stamped work visa. His lawyers and friends waited to greet him. His story set a precedent in the immigration community. It was the rare case of an aged-out Dreamer who returned to Mexico and received an immigration waiver to work legally in the United States.

Cabrera’s time in the United States, however, has an expiration date. His immigration visa waiver will expire on September 30, 2016, and his current job lasts until June 30, 2016. His future is uncertain. Yet he continues to dream of staying, to help other immigrant students in New York succeed.

Immigration interested me since I arrived in New York. Being an immigrant myself and struggling with the difficulties of adapting myself to a new country, I realized how lucky I was that I had a visa. I met Angelo Cabrera in 2008 in the South Bronx while he was working at MASA. I soon realized that he was more than an immigrant trying to get an opportunity. He was a real leader for the community.

I started documenting his life, photographing the most relevant moments, like his graduation day from Baruch College and an immigration rally in Washington, D.C. As time passed, Angelo became not only the main subject of the story, but also my friend. I witnessed the first embrace with his mother after 24 years. I comforted him after his waiver was denied. I sent the photo story to all the media outlets that I knew, thinking that maybe it could help him. Finally the story was featured in The New York Times and later in many other newspapers and broadcast channels. My photographs were part of the campaign that Change.org launched, #BringAngeloHome.

I felt nervous when I finally saw Angelo return to New York at the John F. Kennedy International Airport. My hands were shaking and it was difficult to press the shutter of my camera. It was one of the most amazing moments. I was only a small link in the great chain of people that helped Angelo return to New York. The fact that my work helped to create change gives me the strength to continue working as a photographer documenting social issues.