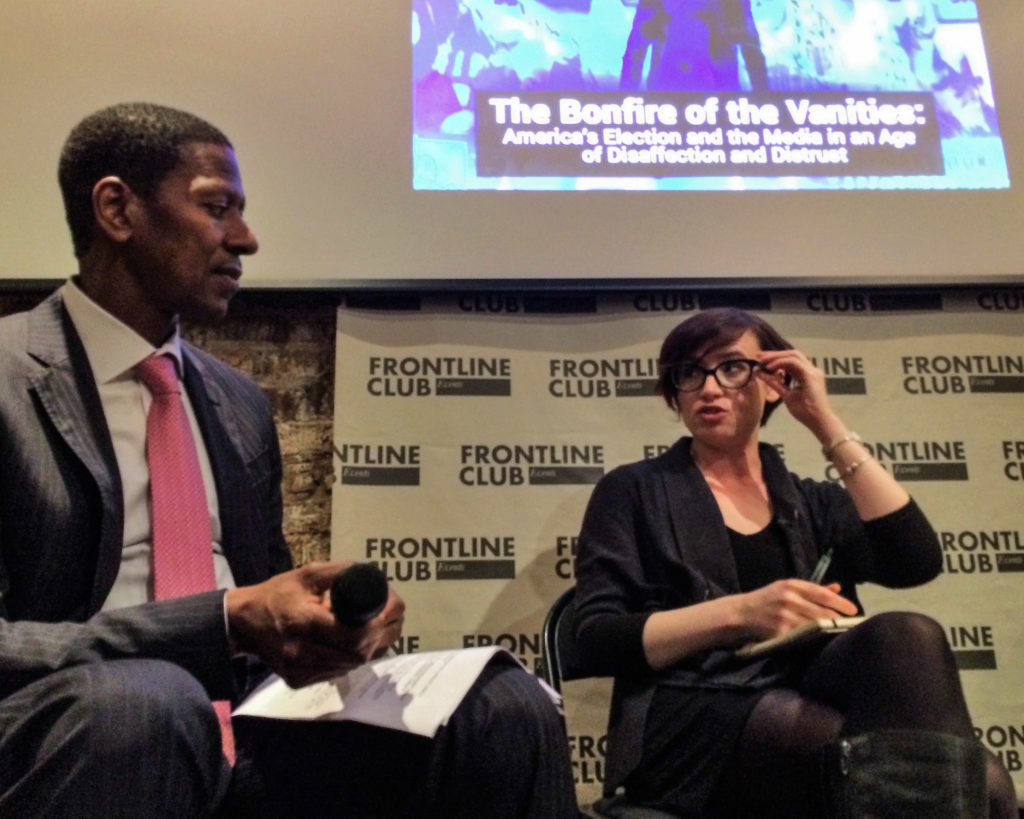 Seasoned journalists and media experts spoke at The Frontline Club in London this week. (Photo by Anne O'Brien/GroundTruth)

LONDON — America may elect its first woman president on Tuesday. But the historic shattering of one of the country’s highest glass ceilings would likely leave behind dangerous shards from the most misogynistic and polarizing campaign in modern history.

Mainstream media has enthusiastically amplified the vitriol while ignoring substantive issues, panelists agreed at a GroundTruth event at London’s Frontline Club on Friday night, a modern-day “Bonfire of the Vanities.”

GroundTruth board member and former New York Times correspondent Calvin Sims moderated a discussion with British columnist and author Laurie Penny, U.K.-based author Michael Goldfarb, along with GroundTruth managing editor Kevin Grant, on how partisan politics and sensationalist journalism have all but destroyed the credibility of the US mainstream press.

“What we see in American is not happening in a vacuum,” said Sims in opening the discussion. “Across the United States and Europe, there is a pandemic of populism whose roots lie in the convergence of opinion on economic policy, the divergence of opinion on culture, and a pushback against increased immigration. At the heart of this phenomenon is a decline in the ability of traditional political parties on both the left and the right to satisfy the needs of most voters — a trend that is likely to lead to even greater turmoil down the road.”

Watchdog group Media Matters for America spotlighted a study finding an exceedingly small fraction of evening newscast coverage of the election focused on policy issues like trade, health care, climate change, poverty, guns or infrastructure. If media’s role is to help improve public discourse at a time when most people are deeply angry and dissatisfied with government, then it has failed tremendously.

“In a time of ballistic untruth, all honest journalism is activist journalism,” said Penny, who reported from both political conventions in the US.

Asked about the origins of grievances Trump claims to represent, Penny explained its roots have been around — and ignored by mainstream media — for decades. She explained that movements like Occupy Wall Street were dismissed by media as senseless drivel from angry, bored youth hoping to copy paste the Arab Spring protests in irrelevant contexts.

“But now that these demands have been weaponized [by demagogues like Trump], everyone is suddenly paying attention,” Penny said.

“What’s happening to [America] has happened before, in other nations, in other anxious, violent times when all the old certainties peeled away and maniacs took the wheel,” Penny wrote last summer. “It’s what happens when weaponized insincerity is applied to structured ignorance…this culture war is being run in bad faith by bad actors who are running way off-script, and it’s barely begun, and there are going to be a lot of refugees.”

Any analysis of the media, panelists said, must be grounded in economics. At a time of shrinking newsrooms and advertising dollars, it’s far easier for journalists to churn out write-ups of Trump’s bombastic comments than to produce illuminating deep-dives on policy. Meanwhile cable news executives have gleefully cheered and enabled the spectacle, devouring the revenues from extra viewership.

As the CEO of CBS Les Moonves said earlier this year, “It may not be good for America but it’s damn good for CBS.”

For the most part expressing more idealistic thinking despite challenging economic times for the press, Friday evening’s conversation delved into questions of journalistic objectivity, independence and responsibility.

The journalist Goldfarb, who started a podcast on the journalism as the “first rough draft of history,” said the media needs to offer illustrative examples from the past as to better inform our present. “The media fails to educate,” he said. “As a result, consumers are misinformed.”

While producing his radio documentary The Unswayables this year about Trump’s “loyal army,” Goldfarb wrote about a retired New York City schoolteacher who was voting for Clinton, but said she understood why people might vote for Trump.

“I taught in inner-city schools for 30 years,” the woman explained to Goldfarb. “I was passed over a few times for promotion for a really good job because I wasn’t a minority and I was working at a school where the kids got free dental and optical treatment because they were immigrant children and I was having trouble affording it for my kids.”

She told Goldfarb that had made her resentful. “That’s a flame that can be fanned into hatred,” she said. “You have to rise above it.”