ON THE GROUND IN AUGUSTA, ME 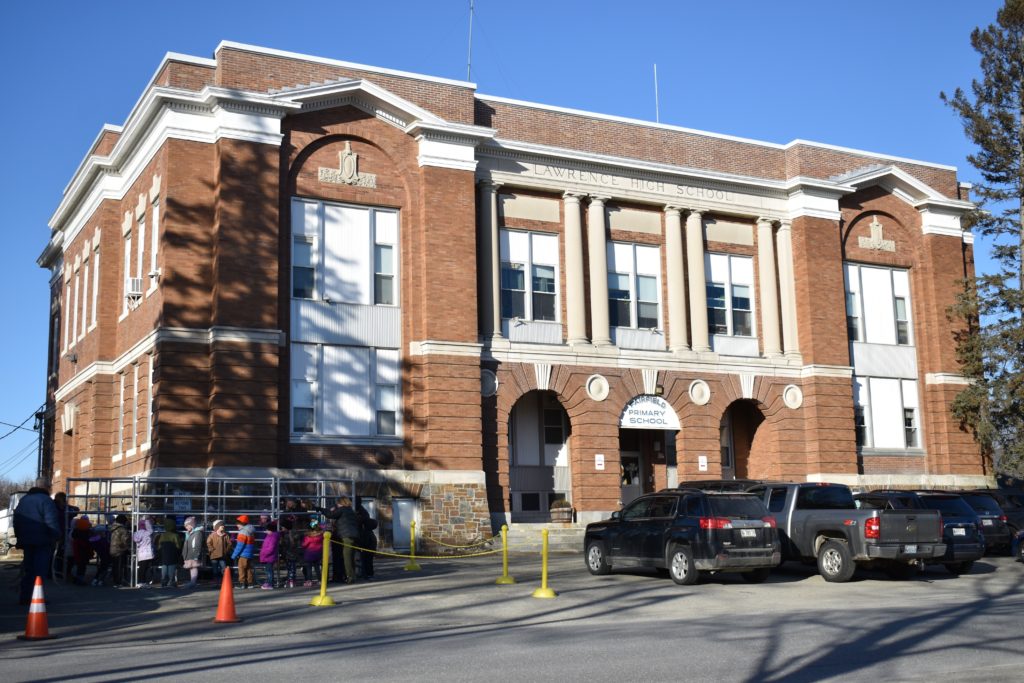 Students at Fairfield Primary School gather around a reindeer pen erected on the small parking lot outside the 102-year-old school building. The primary school currently houses prekindergarten and kindergarten students in Fairfield, Maine, and is the state's top priority school to replace following the discovery of an "erratic" heating system and asbestos materials throughout the building. December 2019. (Photo by Samantha Hogan/GroundTruth)

AUGUSTA, ME — Rushing through Cony High School’s cafeteria, past the afterschool crowd doing homework or scrolling through TikTok videos on their cell phones, down hallways lined with banks of red lockers, I’ve rarely paused to think about the building I’ve visited each Monday since August, where I’ve been helping a group of students revive their newspaper The Rameses. But as I started to investigate Maine’s backlog of school construction projects, I learned that this building’s story is a gamble both distressing and—ultimately—lucky.

Connie Brown remembers it all too well. As superintendent of the Augusta School Department from 1999 to 2013, she vividly recalls the unease of standing on the top floor of the former high school building and looking through the gaping crack between the floor and wall that reached straight down to the bottom floor. The snow blew through cracks in the translucent Kalwall siding—a translucent paneling better adapted for the south than central Maine—during the winter, and then came the gamble.

The school system paid for multiple expensive studies and struck a deal with a builder before the state officially gave the go-ahead to build a new school. The city then raised money and hired a lobbyist who pushed for a statewide increase to school construction aid, but without the state’s support the project would be millions short.

On August 21, 2002, it all paid off when the Department of Education stopped approving new projects at No. 11, Cony High School.

But where some school districts have gambled and won, others have languished on long waiting lists.

Over the last two decades, Maine has approved 75 school construction projects, a review of state records shows. A novel statewide assessment in 1998 estimated Maine’s backlog of school construction and major renovation projects was valued at more than $500 million, and despite approving new schools, the skyrocketing construction costs and stalled state funding has actually made the backlog grow.

“We’re in an interesting and, I would say, an ominous time with crumbling infrastructure,” Commissioner of Education Pender Makin said during a sit-down interview.

We are tucked away in the corner of an atrium on the campus of the University of Southern Maine. She was invited to speak to students, but her aids pulled her out of the 20 minute interview with me for my investigation into the increasing backlog of school construction projects in Maine for Pine Tree Watch. In the rapid transition from presenter to interviewee, she looked at the pile of papers they handed her and sighed. She knew the problem: Maine was short on money.

A total of 74 schools had applied to replace aging and deficient buildings, and Makin had only $126 million approved from the legislature for new school construction.

More than 30 months after the Maine Department of Education closed school construction applications, she had approved only the top-three ranked projects, including Fairfield Primary, North Elementary School in Skowhegan and Rumford Elementary School.

At the top of the repair list is Fairfield Primary School: a 102-year-old, four-story building with no elevator serving prekindergarten and kindergarten students. Over the past century, it has served as a high school, junior high, middle and primary school. Its application in 2017 revealed startling problems, from an “erratic” heating system to asbestos that was “rampant throughout the building.”

Students in Fairfield, returned to the building for the 2019-2020 school year despite the known problems inside the school. A rusting fence surrounds aging playground equipment and residential homes crowd the school yard with stairs leading up to every entrance show the effect of time.

Larry Hillman, owner of nearby Hillman’s Bakery, attended junior high in the building and sent his twin daughters there 25 years ago for kindergarten. His mother-in-law graduated from it when it was a high school and his wife teaches pre-K there now.

Hillman is hopeful that the state funding will give the town options for a long-term solution for its youngest students. Still, he worries what replacing Fairfield Primary with a new building could cost him.

“The taxes are really high in Fairfield as it is, we certainly don’t need to raise our tax rate any more than necessary,” Hillman said. “If they’re going to build something that doesn’t make sense, then I might not vote for it.”

Spend any time in Maine and you’ll learn it’s a state that prides itself on its local control. Communities own and maintain their own school buildings and have fought the state to keep it that way. But that also means the Department of Education was largely in the dark of Fairfield’s needs until the application landed on its desks.

Hanging on Makin’s office wall is a map of the state. Large white swaths of unorganized territory on the northwestern side of the state worry her. There, a school may be the community’s only gathering place, but increasing costs make it easier to turn off its lights and bus kids to neighboring districts.

Among the options Makin is considering is a proposed rule change that would allow her to combine the state’s $20 million debt limit for building regionally consolidated high school schools and technology centers with the $126 million for school construction projects. This could potentially allow more projects to be approved. But not nearly all of them.

Samantha Hogan covers education for the Maine Center for Public Interest Reporting / Pine Tree Watch. This dispatch is part of a series called On the Ground. Follow her on Twitter: @SAHogan.