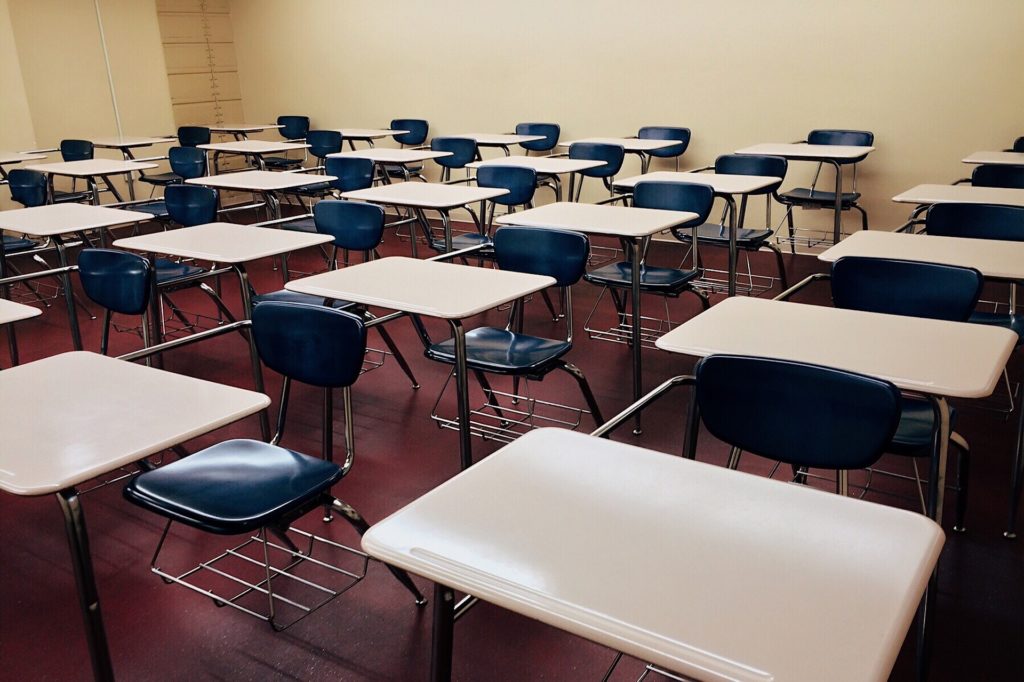 A dueling campaign to influence science teachers' approach to teaching climate change highlights how classrooms have emerged as a battleground in the American political war over climate change. (Pixabay)

This spring, some of the same teachers are opening packages containing very different materials: A book written by a Cornell University affiliate called “The Teacher-Friendly Guide to Climate Change,” which embraces the prevailing science, explains the phenomenon in detail and includes recommendations for how to teach the subject to children.

This rare back-and-forth of direct mailings to teachers demonstrates how classrooms have emerged as a battleground in the American political war over climate change. While those who reject mainstream climate science have long advocated their view in Washington and statehouses across the country, their efforts to influence educators — and the counter-efforts from the science community — shows the extent to which the minds of children are also being targeted.

Last year’s mailings were sent out by the Heartland Institute, an Illinois-based think tank that holds an annual conference that has become a pilgrimage for those who reject the overwhelming findings of the scientific community that humans are causing the earth’s climate to change. The packages contained pamphlets, a DVD and a book titled “Why Scientists Disagree about Global Warming.” A spokesman for the group said it sent more than 350,000 packages to K-12 and college-level science teachers last year.

Those direct mailings, first reported by FRONTLINE in collaboration with The GroundTruth Project, led three ranking House members to condemn the campaign as propaganda and Democratic senators to question Secretary of Education Betsy DeVos about the effort.

News of the Heartland campaign also reached the staff of the Paleontological Research Institution (PRI), based in Ithaca, New York, that has received grants from the National Science Foundation to publish a series of “teacher-friendly guides” for teaching earth science. At the time, the group was about a month away from publishing a guide to teaching climate change, said Alexandra Moore, PRI’s senior education associate and co-author of the book.

“We were all sitting there looking at each other saying, ‘Oh my gosh, wouldn’t it be amazing if we could send out copies of this book to every teacher who got the Heartland book?’” she said.

In contrast to Heartland, which says it aimed to send its book to every middle school teacher, high school teacher and college instructor who covers the subject, Moore and her team have been sending out a single hardcopy of the book to one science teacher or administrator in each public high school, plus CDs containing digital copies of the book for their colleagues. So far, the group has raised $70,000 on its crowdsourcing page, and another $30,000 in additional donations — enough to send the materials to about 50,000 teachers, Moore said. She estimates it will cost $400,000 to send the book to every public high school in the country.

The PRI book includes chapters like, “Why Teach About Climate Change?”, “Climate Change Through Earth History,” and “Evidence for and Causes of Recent Climate Change.” Don Duggan-Haas, co-author of the book and director of teacher programing at PRI, said the book is aimed at teachers who may not have had robust instruction in climate change in their own education.

“We know folks need it,” he said. “It’s written for an audience that is scientifically literate but not in the disciplinary areas you need to teach climate change. This is for the biology teacher who is suddenly assigned to teach an earth science class.”

A 2016 national survey of 1,500 science teachers found that 31 percent told their students that global warming is still up for debate. One in 10 told students that climate change is a natural phenomenon. Five percent simply didn’t mention the subject. And a 2015 Pew survey  found that while young adults aged 18 to 29 agree that humans are causing climate change more than their parents and grandparents do, 37 percent believe there is either no solid evidence for it, or that it is natural.

“My opinion is the book was not written to teach young people about climate science. It was written entirely to indoctrinate teachers and their classes into the alarmist scare that our world is going to hell in a handbasket if we don’t stop using fossil fuels, when nothing could be further from the truth,” he said.

Though the book was on the brink of being published when the Heartland mailings went out, PRI added a “Frequently Asked Questions” chapter directly responding to the Heartland materials. The Heartland book, for instance, argues that “a warming of 2°C above today, should it occur, falls within the bounds of natural variability.” PRI’s chapter responds that “there are no known sources of natural variation that would give rise to changes as rapid as those observed in global temperature over the past 150 years. There is, however, a human-induced cause … [that] has long been expected to give rise to such change based on basic physical principles.”

The dueling campaigns coincide with efforts to roll back major environmental protections by the Trump administration and a series of attempts in statehouses across the country to influence how scientific topics like climate change and evolution are taught. Last year, at least 11 measures were introduced in nine Republican states aimed at supporting public school teachers who want to teach “diverse” views on the issues, or otherwise attempting to sway how teaching science is approached. For instance, an Alabama joint resolution stated that certain subjects, including global warming, may “cause controversy” and “some teachers may be unsure of the expectation concerning how they should present information when controversy occurs.” The measure urged educators to “respond appropriately and respectfully to differences of opinion.” This resolution and four other measures in Florida, Idaho and Indiana passed.

Across the country, there is no set curriculum for science education; decisions about what to teach are typically made at state or district levels. In 2013, a national effort to create more uniformity resulted in the Next Generation Science Standards, which includes education about human-caused climate change in middle and high school. So far, 19 states and the District of Columbia have adopted those standards; but in others, the standards have caused controversy. In recent months, attempts to dilute or remove climate education from teaching standards were narrowly defeated in New Mexico and Idaho.

In the middle of Idaho’s battle over whether to include human-caused climate change in its science standards, a donor asked to pay for the PRI book to be sent to every school teacher in the state, Moore said. Another donor has funded packages for schools in Florida — where residents gained new powers last year to oppose classroom materials — as well as North Carolina, South Carolina and Nevada. The organization has also sent copies to high schools in New Hampshire and New York, according to Moore.

Not everyone is a fan of the direct mailing method, however. David Evans, executive director of the National Science Teachers Association, who has spoken out against the Heartland book, said that he hadn’t had a chance to review the PRI book, but that direct mailing “wouldn’t be my choice of how to put resources out there.” He said he was especially wary of materials “provided by someone who has an ethical or moral point of view.” Instead, he said, they should “equip teachers to just teach science” and desist with moral or political views.

Moore, a geologist who taught at the college level for 30 years, disagreed, saying she sees it as her responsibility to not just teach the science of climate change, but to place it in a moral framework.

“Every student needs to engage with science as a scientist would,” she said. “But I also think that it’s my job to ask students to confront what we’re doing as humans. Advocacy is absolutely part of what I do as a teacher. They don’t have to act on what I say, but I would be failing my students if I didn’t say it.”

Among those who’ve picked up a copy of the PRI book is Lisa Ballard, an environmental science teacher at Glendale Union High School District in Phoenix, Arizona. She said she and other teachers at her school received the Heartland packages last year. She said she was shocked to find a colleague was considering using those materials in her class.

“I had a talk with her,” Ballard said. “I told her it wasn’t credible and not aligned with our standards, and she said she’d had no idea.”

Ballard suspects there are many other teachers out there like her colleague.

“Teachers don’t get a lot of free stuff, so when they do — even if it’s just slightly relevant to their class — they’ll be inclined to use it,” she said.

She found the PRI publication more credible at first glance, though she said she’d have to vet the science in it before using it to educate her students.

Correction: An earlier version of this story incorrectly identified David Evans as the president of the National Science Teachers Association. Evans is the group’s executive director.

A version of this story appeared in FRONTLINE on March 23, 2018