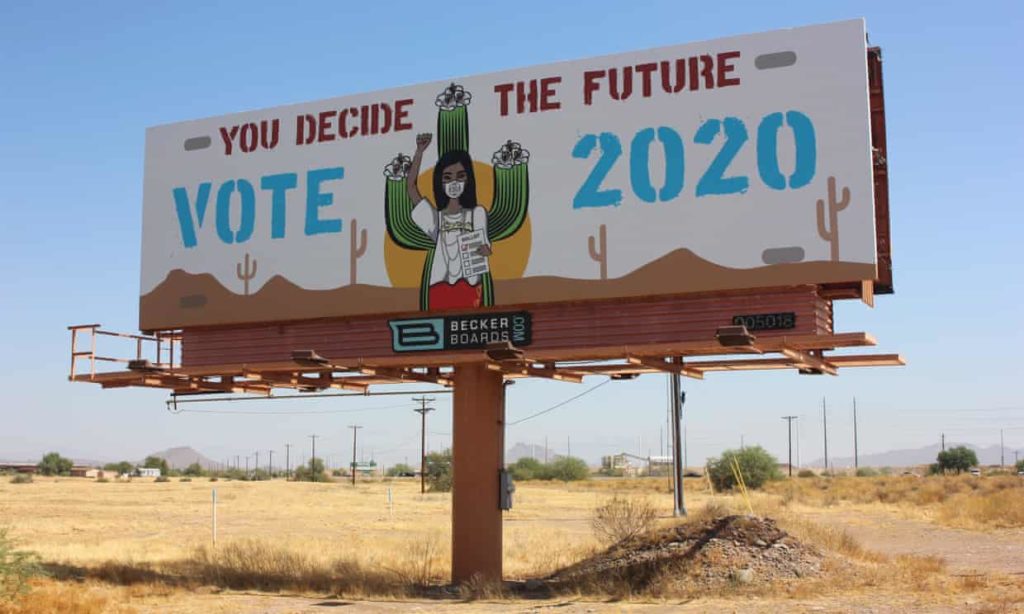 A billboard aimed at Native Americans in Arizona urging people to vote in the November 2020 U.S. elections. (Photo by Isaiah Murtaugh)

Tamisha Jensen requested a mail ballot in mid-September. Mail ballots don’t ship in Arizona until Oct. 7, but she’s worried her first absentee ballot won’t get to her.

Jensen, a jeweler who lives in the Navajo Nation, doesn’t have a regular mailing address – she writes “a mile west of Cameron Chapter House” – and the U.S. Postal Service doesn’t deliver to her rural, desert home. She and her family share a P.O. box at the tiny Cameron post office, but it’s not always reliable: she didn’t receive her son’s school report card last year and she doesn’t know what else she might have missed.

Native Americans have only had nationwide voting rights since 1957, and though the 1965 Voting Rights Act removed many barriers to voting, a number remain in place, including discriminatory voter ID laws, gerrymandered voting districts and poor polling place access. Voting rights experts have seen the nationwide expansion of mail balloting during the pandemic as a boon for safe voting access this year, and the Navajo Nation had one of the densest outbreaks of COVID-19 in the country. But Native American advocates are wary.

Tribal advocates estimate that some voters have to drive anywhere from 40 to 150 miles roundtrip to pick up their mail. But the Arizona lawsuit Yazzie v. Hobbs also pointed out that the reservation’s 27,425 square miles are covered by just 24 post offices and 15 postal service providers. The slightly smaller state of West Virginia has roughly 10 times the population, but it’s covered by 725 post offices and postal service provider sites.

If a potential voter shares a P.O. box with family or friends but their name isn’t registered to it they might not have a way to receive a mail ballot at all. If they do manage to receive a ballot and drop it back at the post office, it could go through a routing maze that adds days to its delivery time, even in a normal year.

In August, the voting rights group Four Directions tracked test pieces of mail sent from local post offices to their corresponding county recorder’s office, and found that mail posted on the reservation has to travel as much as 244 miles further than mail posted off-reservation. There are currently no 24/7 ballot drop boxes and just one early voting site for every 1,532 square miles, according to the Four Directions attorney O.J. Semans.

And that’s if voters can get registered. Filling out a physical registration form holds the same problems of distance as mail voting. Broadband access for online registration is limited and, until a week ago, Arizona’s online voter registration form didn’t allow for non-traditional addresses.

These problems are mostly rural, and reservations in more suburban or urban settings face fewer issues. The Salt River Pima Maricopa Community outside Phoenix has had traditional mailing addresses for more than 10 years and worked with Maricopa county to get ballot drop boxes for this year’s election. “Initially there were concerns [with mailed ballots being returned on time], but we’ve been assured [by the county] that there won’t be any issues,” said the Salt River intergovernmental relations project manager, Angela Willeford.

But other, perennial ballot problems persist. Many native languages are only spoken and cannot be effectively translated for mail ballots. Several states require ID to vote by mail, but don’t accept tribal ID cards, sometimes the only form of identification tribal members have.

A spokeswoman for Arizona’s secretary of state, Katie Hobbs, said that the state has secured an additional $1.5 million for elections in the state’s 20 reservations, to be used for mobile voting sites, extra ballot boxes and voter outreach. They have also put together audio and written ballot translations for the Navajo and Apache nations, though a voting safety guide implies that voters still need to call the local county recorder’s office to access it.

“I understand their concerns, which is why we are prioritizing outreach efforts in parts of the state that don’t have consistent postal service. Under the current circumstances, we have to make sure voters are aware of the options available to them,” Hobbs wrote in an emailed statement.

Meanwhile, Jordan Oglesby, a Navajo Nation department of justice lawyer, said that the nation was trying to keep every option open, including mail. “With everything [Navajo Nation residents] have gone through this year, I just want to make sure they have an opportunity to cast their vote,” said Oglesby.

In Cameron, Tamisha Jensen said if her mail ballot did not come, she would be forced to vote in person. But for Jensen, the failure would hardly be a surprise. She has had issues with several in-person ballots in the past. And when asked if she trusts the federal government, she burst into laughter behind her leopard print mask and gestured towards the plywood jewelry stand where she sells her work to passing tourists, the valley where she and her family live in a small cabin and the dry, shrubby desert, without rain for the second year in a row.

This article is part of a reporting effort by the GroundTruth Project on voting rights in America, with support from the Jesse and Betsy Fink Charitable Fund, the Solutions Journalism Network and the MacArthur Foundation.

A version of this story appeared on THE GUARDIAN on October 9, 2020