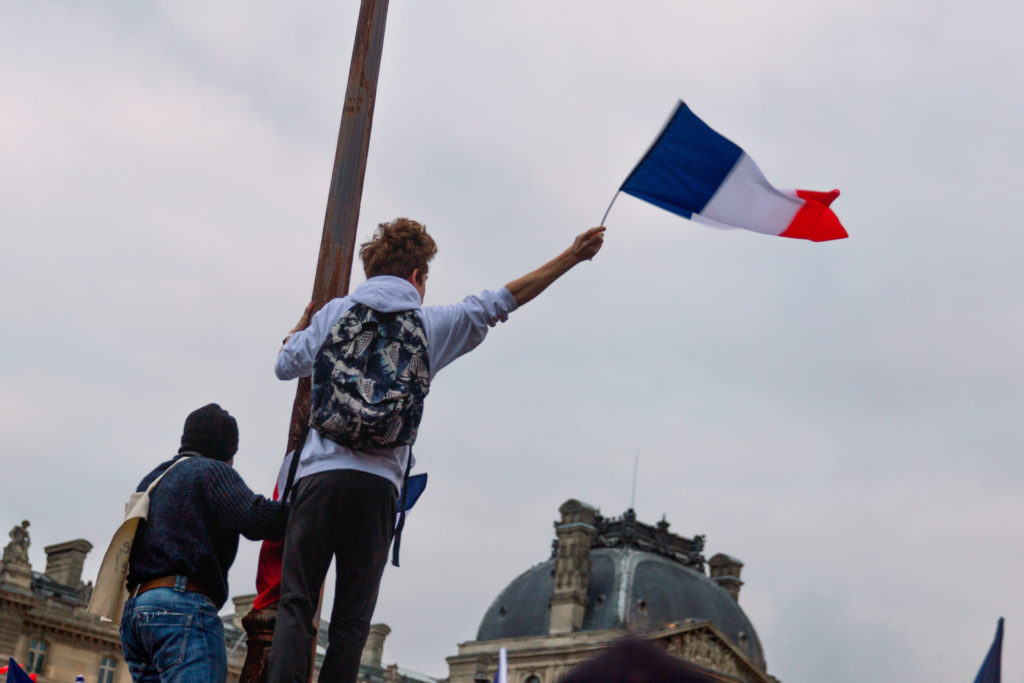 Supporters of Emmanuel Macron, the victor of France's presidential election, celebrate outside the Louvre on May 7, 2017. (Lorie Shaull/Creative Commons)

PARIS — Centrist candidate Emmanuel Macron will become the youngest president of France since Napoleon next week after his decisive victory against the National Front’s Marine Le Pen on Sunday.

“What we’ve done, for so many months, has no precedent, no equivalent,” Macron told supporters in a victory speech Sunday night. “Everyone told us it was impossible, but they didn’t know France.”

The 39-year-old won his election with significant support among young voters: Exit polls found that approximately two-thirds of 18- to 24-year-olds and 60 percent of 25- to 34-year-olds chose Macron, while about one-third voted for Le Pen. These results tracked fairly closely with the overall election results, in which Macron won the race 66 percent to 34 percent.

Still, young people had the highest abstention rates among the French electorate: approximately a third of voters under age 35 stayed home, exit polls showed. And while Macron won the youth vote decisively on Sunday, Le Pen’s National Front has a strong and loyal following with young voters, many of whom responded to her key campaign messages on terrorism and immigration. Compared with the United States and the United Kingdom, where populist results appeared to be fueled largely by older voters, young people are a significant part of the Le Pen electorate.

Paris is, undoubtedly, Macron country: official results from France’s Interior Ministry showed him winning just under 90 percent of the votes within Paris city limits. And for good reason: his message, one of embracing France’s diversity and engaging with the European Union and the world, plays well to an audience as urban and diverse as Paris.

The GroundTruth Project spoke with young supporters of Macron at his election night celebration outside the Louvre Museum to hear about why they voted for him and what they think about youth involvement in the election. Here’s what they had to say:

Boullet, who lives in Paris, said she voted for Macron in both the first and the second round.

“I think he’s someone who is intelligent,” she said. “He’s also in a movement that assembled many French people, in his party.”

Her vote wasn’t just because she liked Macron, however: “I voted for him today to counter Marine Le Pen because I really don’t like her,” she added.

The top issue in Boullet’s mind? “Working out the social problems and the problems of terrorism,” she said. “So, it’s finding a solution that’s the most important, I think.”

Boullet said the stakes of this election were high enough that even her not particularly engaged friends showed up to vote — but that might be less true in next month’s legislative elections, where Macron will have to build a coalition from scratch for his brand-new party.

“I have friends who [sometimes] don’t vote. But today it’s the presidential — they voted,” she said. “We’ll see for the legislative.”

For Sebban, who also voted for Macron in both rounds, the 2017 election was about moving beyond “the classic right and the classic left.”

“The essential reason I voted for Macron is above all to go beyond what France, up until now, has had: the classic right and the classic left,” he said. “We will see more a party where everyone works together, rather than fight against [each other].”

With Sunday night’s result, he said the vote represented a desire for “a Europe now more united, and more open.”

“It’s sad to watch young people vote for Le Pen, but at the same time it’s important to understand they’re looking for something, they’re afraid,” he added.

He said a “big majority” of his friends were interested in the election, because it was a race that “goes to the bottom of the differences between the right and the left.”

“This is my first presidential election, for the most part my friends as well,” he added.

“It was to avoid Marine Le Pen winning,” he said, of his vote for Macron. “That is, for me, the principal reason.”

The economy, issues of French society and the environment were the most important issues for Le Gleuher in this election. “The economy is important, and in general all the social questions about many things,” he said. “Notably, you have the National Front who wants to go backward on many social advances. Preventing that is important.”

The environment, he said, is the main reason he chose Hamon over Macron. “Macron didn’t talk about this very much so that’s why I gave my vote [to Hamon] in the first round,” he said. “Because it’s a very important subject.”

Le Gleuher said Macron’s candidacy appealed to young people, including many of his friends, because he represents “novelty” and the possibility for change.

“There are quite a few young people who are excited about Macron, who like him because he’s young himself, he represents novelty,” he said. “It’s true that I know a lot of people around me who were not all interested in politics, but many of my friends were interested in politics with Macron. Because they think things can change, and he is really new, and outside the system.”

Echoing Macron’s own language about “turning the page of political life” in France, Khalifa said the 39-year-old candidate’s victory can usher in a new era of French politics.

She had little to say about Le Pen, only noting that she “think[s] what I’ve always thought of her” and added that Le Pen’s performance in the May 3 debate didn’t help her case among French voters.

Young people here were motivated to vote in Sunday’s election out of concern that they could follow the United States’ election of President Donald Trump, Khalifa said.

“Everyone is engaged this year because there is a lot of fear for the future of France—fear that what happened in the United States could happen in France,” she said.

Guérin and Hegues, celebrating Sunday night with a group of friends, said they both voted for Macron in both rounds.

Hegues said she likes Macron’s “cultural program for young people,” while Guérin appreciated that he is economically “liberal.”

Boyer, however, said she did not vote on Sunday because where she’s registered to vote is “too far away” from where she attends school in Paris.

Most of their friends, the women said, had voted in the presidential election — “the presidential, yes,” Hegues said. But when asked whether they thought as many friends would vote in the legislative elections, they shook their heads.