Love in the Time of Civil War 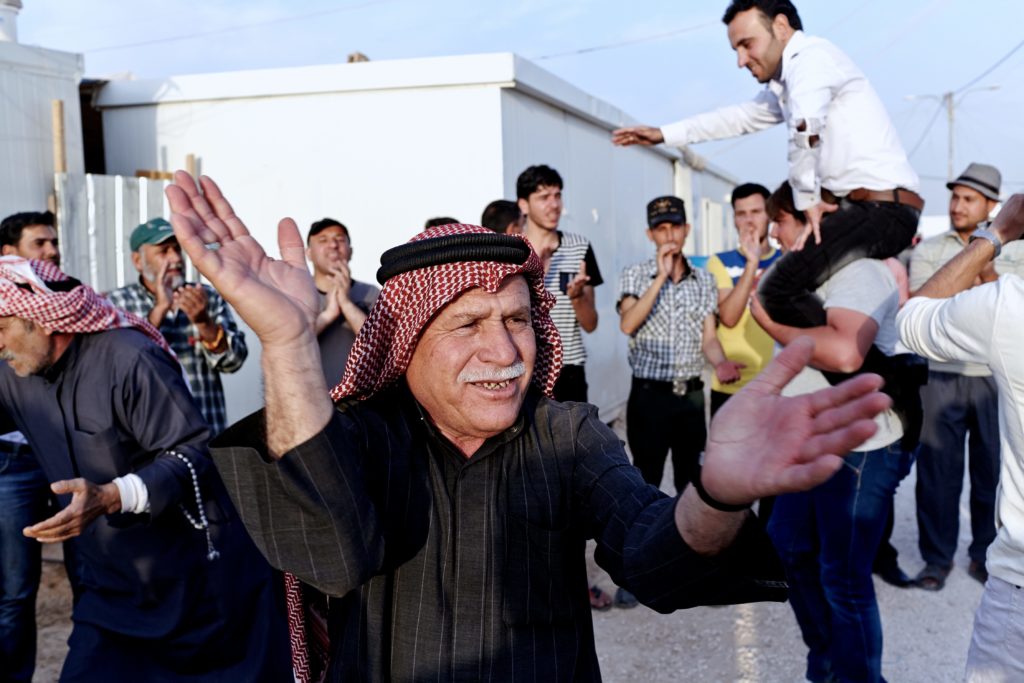 This article was published in partnership with the Atlantic magazine.

ZAATARI REFUGEE CAMP, Jordan—During almost four years of civil war, more than 3.8 million Syrians have fled their country. Over 600,000 Syrians have resettled in neighboring Jordan. The country’s Zaatari refugee camp, which shelters around 100,000 Syrians, is the world’s second-largest after Dadaab in Kenya. Most of the displaced in Zaatari are women and children from the city of Daraa, the birthplace of Syria’s uprising.

In Zaatari, life hobbles on. Residents have set up a bustling chain of commerce on the city’s main drag, euphemistically nicknamed the Champs-Élysées. As is the case in many parts of the world, one of the camp’s most spirited and lucrative industries is the marriage business. Dress shops line the street, and men at the market put down deposits for bridal jewelry. For their big day, women rent wedding dresses for around $20 and get their hair blown out and eyes charcoaled for a couple of dollars.

Across the Middle East, marriage is the institutional and cultural gateway for societal recognition—one’s official entrance into adulthood. Even, and perhaps especially, in times of war, girls and boys still yearn to become women and men.

Plus, weddings give residents a chance to escape the grim monotony of the passing days. Marriage is a familiar way to celebrate life and beginnings in the midst of a crisis marked by a deficit of both. What follows are the stories of five couples who are doing just that and who told me their stories last spring.

After months of anticipation, 24-year-old Abu Ali is finally able to exhale.

“The search has ended,” he declares with a faint blush. A gaggle of guy friends gather around to congratulate him. He had been looking for a bride for almost five months and had a few options, he says, but he decided on 19-year-old Bushra.

“She has everything I need,” he explains, ticking off the requirements that he says every man in his family has for a woman: She comes from a good family, has “good, strong values,” and, most importantly, “she’s the most kind.”

Ali’s family was one of the first to settle in the Zaatari refugee camp nearly four years ago; they say they can sketch the sprawling micro-city and its dense maze of residents on the back of their hands. They arrived in August 2011 after Ali’s father, Abu Wael, was released from jail, where the government had sent him and his brother for 17 days.

Abu Wael, rosily rotund and endlessly cheerful, is something of a celebrity in Zaatari–a sagacious elder who men consult on everything from mediating small quibbles (“People fight over tents and caravans here like they’re gold,” he says) to the most important milestone: finding a wife. He says there are hundreds of marriages a week in the camp. “People everywhere just want love,” he says. “Why else do you live?”

In the beginning of the crisis, Abu Wael says, young male and female refugees didn’t want to get married, preferring instead to postpone weddings until they returned to Syria. But each day the war has dragged on, their will has dampened. It’s not losing hope. It’s accepting reality. “Now, they all want to get married,” Ali says. “They’re afraid their families won’t be around to see their children. … Life isn’t as certain as it once was.”

Bushra says she was in her first year of university, studying education, when she fled Daraa in November 2012. She still wants to become a teacher. But, as many young people in the camp will tell you, she fears she’s forgetting everything she learned in school.

Ali and Bushra say they’ll continue their studies when they return to Syria. Until then, their main goal is to save enough money for a satellite TV. Ali has been working almost every day at the camp’s supermarket and his family gave him a rare advantage: two caravans—a luxury that separates Zaatari’s have-nots from the have-absolutely-nothings. Caravans are subsidized by UNHCR and cost around $400 to $600; moving into one is nearly everyone’s short-term Zaatari dream. It’s a starter home, without the start. Ali hopes to decorate the caravans “in the American style, with an open kitchen.” “I just hope she can cook,” he nervously laughs.

Bushra, whose village in Daraa is only 20 miles away from Ali’s, seems certain about only one thing: She wants to wait to have children until they’re back home in Syria. But Abu Wael fervently instructs them not to wait.

“God will raise them,”  he advises. “One cannot wait any longer here.”

“We will go back eventually,” Ali counsels, throwing Bushra a comforting, loving glance from across the dim room, and just narrowly escaping the watchful glare of her two towering, older brothers, whose onyx eyes have been set on Ali nearly all afternoon.

All 19-year-old Najlaa remembers from the worst day of her life is a big boom. The sudden silence that followed has stayed with her, louder than her thoughts.

She says she came to Zaatari in January 2013 with her aunt, who braved a dangerous commute from Daraa to Aleppo—at the other end of the country—to get her after Najlaa’s parents and brother were killed in shelling right outside their home. She lived in Daraa for a few months with her aunt, but they left after intense shelling hit a nearby village.

Najlaa still trembles and stutters when she talks. Her aunt says she has suffered tremendously from the trauma. Her right eye won’t stop twitching and her hands clench involuntarily.

“She only began to smile again after the wedding,” her aunt says.

Najlaa’s husband, 20-year-old Gassem, arrived in Zaatari in 2013. He lived near a government post and military checkpoint back in Daraa and feared being enlisted like many of his friends to fight in Bashar al-Assad’s army. At the start of the war, Gassem was sure freedom would come. What came instead was “black,” he says. He’s a carpenter and wants nothing more than to “build again.” Living in Zaatari, where there’s so much to build but no tools, is a slow torment.

“What can I build here, a mansion?” he jokes. “Whatever we try to do here has no real meaning, except for her.”

Gassem grabs Najlaa’s arm. “After we got married, we have something to live for,” he says. “We can share our sadness together, we can share everything. It’s ultimate friendship.”

Ranim and Thabet were neighbors in their village in Daraa, but they didn’t meet until they came to Zaatari. Thabet says he heard about Ranim’s beauty. And Ranim says she heard about “an older, good-looking, respectful boy.”

Her father proudly announces that Ranim, 15, had many potential suitors in Zaatari, but her family liked Thabet the most—he’s “tender and gentle” and “a solid young man … that’s very hard to find.” It’s not uncommon for women in Daraa to get married as young as 14.

After living in Zaatari for nearly a year, Thabet’s mother was able to procure an apartment through distant relatives in Jordan’s capital, Amman. But Thabet still lives in the camp in solidarity with his friends and family who remain, preferring a small tent with Ranim. Zaatari isn’t home, he says. “But it’s the home we all now have. … At least here, you have a sense of Syria—a little Syria.”

Thabet says his older brother was killed in shelling in Daraa and his younger brother has been withering away in a Syrian prison. His father refuses to leave Syria until his brother is released.

If he and Ranim stay on in the camp, they’ll open their own shop. They say they’ll name the store and their future children after some of the war’s martyrs.

Amani, 25, says she arrived in Zaatari in October 2012 from Daraa, where both her husband and brother were killed in shelling before she fled. A picture honoring her brother as a martyr is the only color in the gloomy brown caravan that she shares with her parents and extended family.

Amani left behind her most beloved possession: an 8-year-old daughter, who now lives with the parents of her deceased husband. “They needed her to stay, a piece of him. … I had no choice,” she says. She and her daughter haven’t communicated since. Amani has found some work in the camp, helping a non-profit organization that works with youth. The proximity to other people’s children is both a salve and a burn.

In August 2013, she remarried a divorced man, a fellow refugee, with three children for whom she says she’s now responsible. They were only engaged for two days. Her father wanted her married as soon as possible, fearing others might wonder why his daughter was still single at 25.

“It’s hard being a widow,” she says in her small caravan, which is lit only by a battery-operated light and small candle. “Especially in the camps where everyone knows everything.”

(At the time of my interview with her last year, Amani was pregnant with her new husband’s child, though she said she’d gone through two unsuccessful, self-administered abortions. She didn’t want to bring a child into an uncertain situation, she said. Her husband had an 18-year-old son who couldn’t see her unveiled, so she was spending most nights with her parents. She said the boy sometimes hit her; domestic violence is a growing problem in Zaatari. She’s since been unreachable for an update.)

Majdolin’s eyes, caked with bright pink eye shadow, widen as she recounts the shelling that forced her family to flee Sheikh Maskeen village in April 2013. Her father stayed in Syria to “help the fight … to help others.”

Three months after Majdolin left Syria with her mother and four siblings, they received a call on her mother’s barely functioning mobile phone. While her father was walking to buy his morning bread, a sniper had shot and killed him.

Majdolin had only planned to be in Zaatari for two to three months. “I thought it was like a cloud, and that it would go,” she says. “I didn’t think it would stay here above my head.”

Her husband, 20-year-old Bashar, came to Zaatari from Daraa with his mother, father, and sister in October 2013; his older brother remained behind, imprisoned. Before he fled, Bashar was studying law. In Zaatari, he’s restless, bored, and anxious—people tease him for not being able to sit still.

Between cigarettes, he fiddles with his mobile phone, thumbing through a photo gallery with pictures of his house in Syria and his favorite possession: a yellow motorcycle. “I used to ride on this everyday,” he says. “Now, I live in a tent.”

“Every man who is my age in the camp sits here with nothing to do,” he says. “We have regret … that maybe we should have stayed in Syria. Maybe things would have been more productive there. Every man who comes to Zaatari feels defeated … like he’s a woman.”

Majdolin quickly upbraids him. “You would have been killed if you stayed,” she says. “What use is that?”

Majdolin spends most of her time watching Bollywood movies in their new tent. She most misses her red diary, where she stored her thoughts and notes from friends. She left it at her house in Syria, along with a blue-beaded necklace and her favorite purple dress.

“We’ve lost years of our life in here,” says Bashar.

Every so often, he hitches a ride to the border, where his Syrian SIM card sporadically catches a signal and he can get the latest updates from family and friends. Sometimes he can even log onto Facebook, where he regularly posts pictures of his imprisoned brother, and some of himself on his wedding day, in a skinny lime-green tie and light pink shirt, struggling to smile.