ON THE GROUND IN CHICAGO, IL 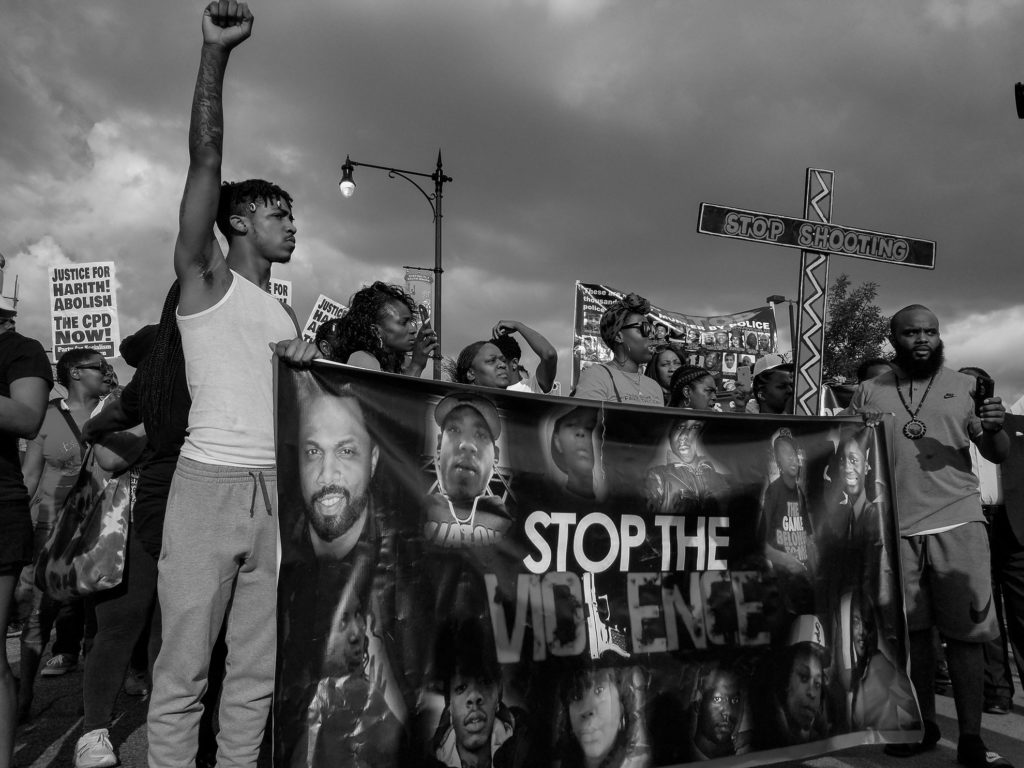 CHICAGO — Harith “Snoop” Augustus was shot and killed on July 14, 2018 by the Chicago Police Department less than a block away from where he worked as a barber in the South Shore neighborhood on the city’s South Side. It’s been six months, and the way daily news cycles go, his death has seemingly been forgotten.

But not for me. For a reason I can’t quite define, I’m still struggling to deal with his death. I didn’t personally know Augustus, but I reported on his untimely death in a feature story for the Chicago Sun-Times. I wanted to explore what it means to a community when it loses a barber, a trade that often puts those who practice it at the very center of life.

“Barbers are sometimes the closest thing to a pastor or a counselor for a lot of folks. Snoop was one of the ones that always listened,” said Adonius Johnson, who owns the Sideline Studio barber shop where Augustus worked. “Some people are put on this earth to make people a better version of themselves. Every barber is a version of that.”

I grew up in the city’s West Side, about 20 miles away from South Shore, a predominately African-American enclave that has brought the world people like Michelle Obama and Kanye West.

In many ways, the two places are very similar. And in both the south and west sides of Chicago, the barber shop is a refuge and your barber offers more than just a haircut, they record history, they share community news and they serve as counselors. I grew up knowing people like Augustus, a relatively quiet man just wanting to get by in a neighborhood where you are more likely to encounter police officers than a grocery store.

And as you walk through the neighborhood where Augustus was killed, you can see the effects disinvestment can have in a community.

Many believe this disinvestment has led to the mass exodus of African-Americans from Chicago. Vacant storefronts litter commercial corridors and craters occupy spaces where residential homes once stood. Regardless, it remains a vibrant neighborhood that hosts youth-led, pop-up art exhibits and is home to the beautiful South Shore Cultural Center. And the barber shop where Augustus worked serves as a kind of community center, too.

I’ve been inside barber shops my entire life and I know the roles barbers play. Barbers are the nexus that connects people within a community and often are the gatekeeper to your most intimate details.

My barber has been in my life longer than most of my relationships.

He’s gotten me ready for many of the milestones in life: first days of schools, senior prom, countless job interviews, funerals and most recently, my wedding.

Augustus encountered police officers at the 2000 block of East 71st Street only a city block away from where he cut hair. He had walked past police officers at which point they said he was exhibiting behaviors of an armed person. Several officers swarmed him and attempted to grab him at which point he attempted to flee. As he ran, his shirt got pulled and exposed the gun he was carrying.

Police then fired several bullets into Augustus, throwing his body stiffly into the middle of the street. Security footage shows the muscles in his legs tense up as his torso slightly waivers. Police take cover even though he never pulls his gun out.

Augustus had a valid Firearm Owners Identification Card, but did not have a concealed carry permit. I was told he carried a gun for self-protection.

Immediately following the shooting of Augustus, police officers violently clashed with the residents of South Shore. One officer waved his wooden police baton in an attempt to restore order to the crowd. But chaos amplified as the officer struck folks and pushed people to the ground.

I watched it all go down from the comfort of my living room, but I was greatly disturbed by what I was watching.

The next day was Sunday and a source called me to tell me organizers would be marching to demand justice for Augustus. Though it was technically my day off and the story wasn’t assigned to me, I knew I needed to be there to speak with those protesting the perceived injustice.

I walked alongside organizers as they marched through 71st Street holding signs that read “Stop the Violence,” “Stop Shooting” and “Justice for Harith! Abolish the CPD Now!”

At the end of the march, the crowd stood in front of the barber shop where Augustus worked. People cried, mourned and openly expressed their anger. They expressed their distrust in the police narrative because of the lack of transparency the department has had with the community in the decades preceding that day.

As I spoke with folks they continued to talk about how Augustus, or “Snoop” as his friends knew him, was a good man, a human narrative that  countered the scary narrative told by police. So as other newsrooms in the city were focused on the “facts” of the story, my fellow Report for America corps member Carlos Ballesteros and I sat wondering what it must be like for a community to lose a barber. We had written a feature story about barbers and their role, and we felt like it was important to share with readers what it means to lose Snoop.

This is the story we wanted to tell.

I hit the South and West Side of Chicago visiting many barber shops. Speaking with clients and barbers alike.

The smell of Pinaud-Clubman Talc powder and shaving cream filled the air as laughter and music drowned out the continuous sound of buzzing from hair clippers in every barber shop I visited.

These smells and sounds are something that always puts a smile on my face. It is my safe space. It is a place of comfort that I know I can be myself and talk about the most ridiculous things.

Yet, I wasn’t at my barber shop and I wasn’t getting a haircut – though the curls on my head were untamed and my beard was undomesticated – it felt the same.

Sunni Powell is an Englewood native whose raspy voice speaks with a sense of conviction. He owns and cuts hair out of Powell’s Barber Shop – also in Englewood – and talked about the many back-to-school events that their shop holds. He also talked about a “Storytime” sessions they used to host inside the barber shop for the local kids, but had to stop because of an incident that happened two years earlier.

A gunman had run into his barber shop, opened fire and killed a longtime customer. It was devastating, Powell said, but all he wanted to do was keep being a positive member in the community.

He talked about the role he played for his clients. He mentors kids, he is often a counselor when people are too proud to seek mental help and he is a sign of consistency to his community.

And this is where I think I am unable to grip with the passing of Augustus, a person I never personally knew.

The sense of consistency.

Knowing a person who you know you will see biweekly or monthly no longer being there. Knowing Augustus’ clients will no longer have that therapist they desperately need but are too proud to console in.

Knowing that one small, yet important, pillar of South Shore is no longer holding the community up, fueling a bit of the instability which it has experienced because of decades of disinvestment.

Manny Ramos is a Report for America corps member with the Chicago-Sun Times, covering the city’s South and West sides.