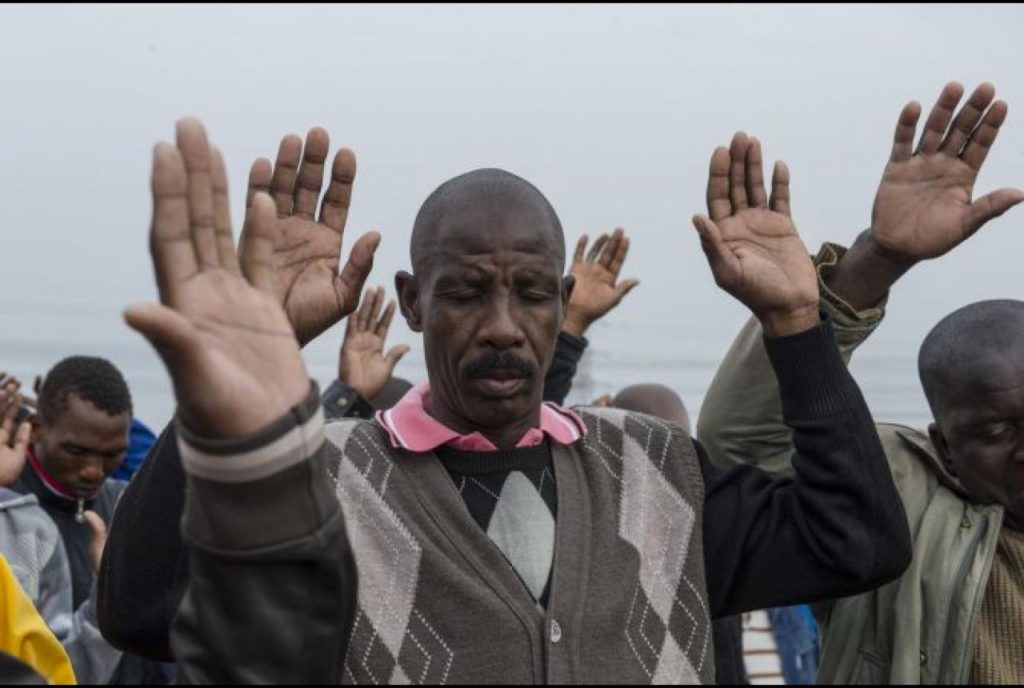 Striking Lonmin platinum miners pray at the edge of the shantytown of Nkanini in northeastern South Africa where they live. Most of the miners are still on strike, asking for a wage of12,500 rand before deductions. Thirty-four miners were killed by police and ten others including two police were killed in a clash with strikers. - ((Greg Marinovich / Global Post))

CAPE TOWN, South Africa — For a mine to produce one ounce of platinum, rock drillers operating 50-pound hand-held machines must break about 10 tons of raw ore, sometimes more than a mile underground.

For decades in the grim, dusty platinum belt north of Johannesburg, locals have been displaced, had their farmland taken away and seen jobs being offered mainly to migrant laborers. As the population of single men in the area has grown, social problems — violence, prostitution, HIV/AIDS and alcohol abuse — have seethed to the surface like the sewerage around the growing number of shack settlements.

South Africa now faces a challenge of a similarly grave national scale to restore social harmony in the wake of the killing by police of 34 striking miners at Marikana on August 16.

Like no other event, the lethal operation has thrown into sharp focus the fragile relationship established at the end of apartheid in 1994 between government, employers, labor unions, law enforcers, the justice system and ordinary people. The fields that hold an estimated 80 percent of the world’s platinum reserves are emerging as the testing ground on which the country’s democracy will stand or fall.

“What we have seen is that if you do not stand up as a people, nothing is going to change,” mineworker Thebe Seshanke told reporters visiting the Lonmin mine at Marikana. Ten people — including two police officers and two security guards — died there in the six strike days leading up to the barrage of gunfire that left 34 dead, 78 injured and led to 270 arrests.

And the crisis is not over.

“We cannot go back to work. It would be disrespectful to the people who died,” Seshanke said.

The wildcat strike at Marikana began when 3,000 rock drillers demanded three-fold pay increases to bring their monthly wages to 12,500 rand ($1,470) but were not supported by the dominant National Union of Mineworkers (NUM). In a sector with no central bargaining arrangement, violence was sparked by rivalry between labor unions and, according to some reports, jealousy of higher-paid subcontractors.

The world’s three largest platinum producers — Anglo American Platinum, Implats and Lonmin — employ about 135,000 people between them in South Africa.

Lonmin, the third largest, laid off 9,000 of its 34,000 workers at Marikana last year. It was looking to follow an industry trend and cut production in the face of a continuing slump in demand and price since the 2008 recession. Earlier this year, rival platinum belt company Impala fired 17,200 workers, 13,000 of whom had embarked on a strike for better pay.

Lonmin’s operations at Marikana “include high levels of fatalities” and that the “residential conditions under which the company’s employees live are appalling” with cases of 50 workers sharing a toilet or a faucet.

Platinum is virtually non-corrodible, has a melting point in alloy of more than 3,000 degrees Fahrenheit and is highly conductive. Platinum has use in fiber-optic cables, eyeglasses, fertilizers, explosives, paints, jewelry and pacemakers. But the fortunes of platinum are most closely linked to the currently sluggish automobile industry, which uses the metal in emissions-capping catalytic converters.

The price of platinum has increased by 5 percent since the Marikana conflict began but analysts would like to see it rise further and return to its historical position, higher than gold. “Lonmin does 60,000 ounces a month so if they are out for two months, that will balance the market,” said Jeremy East, head of metals trading with Standard Chartered Bank.

In tandem with the rise and fall of platinum, the African National Congress government’s credentials to govern have been sliding. Around the country, violent service delivery protests have become a daily reality. Beset with crime and unemployment rates exceeding 50 percent, township residents have lost patience with corrupt local politicians who have failed to deliver water, sanitation or textbooks.

Nationally, the ANC’s governing alliance — consisting of the NUM-affiliated Confederation of South African Trade Unions (Cosatu) and the Communist Party — is perceived as being too cozy with the white-led corporations they opposed during apartheid. Marikana has an emblematic example of the phenomenon in former NUM leader and ANC heavyweight Cyril Ramaphosa, now a business tycoon who sits on Lonmin’s board.

The NUM denies that it has shares in mining companies, or that it is too close to managements. But NUM general secretary Frans Baleni is a harsher critic of the concept of nationalization than many mining company executives. The junior mining sector has also provided rich pickings for politically well-connected beneficiaries of Black Economic Empowerment (BEE), including President Jacob Zuma’s nephew, Khulubuse Zuma and former president Nelson Mandela’s grandson, Zondwa Mandela.

Across the mining sector, NUM-breakaway unions, like the 10-year-old Association of Mineworkers and Construction Union (AMCU) have become attractive to the rank-and-file. In townships, firebrand ANC Youth League leader Julius Malema — who calls for mine nationalization and land expropriation — seems to have become all the more popular since being ousted from the ruling party earlier this year.

The disconnect between the South African people and the establishment was made complete at Marikana through the scenes of highly equipped police opening fire on men carrying traditional clubs and spears. The impact on public opinion of the three-minute blast of gunfire was all the greater because the recipients of the bullets, who according to autopsy results leaked to The Star newspaper were mostly shot in the back, were migrant workers supporting extended families all over the country.

As if to introduce a final alienating wedge between South Africans and the authorities, the state prosecutor last week invoked a legal tool often used in the apartheid era — the ‘”common purpose doctrine.”

He used it to upgrade the 270 detained miners’ charges from public order offenses to the murders of their 34 colleagues. After an outcry, the charges were dropped on Sunday, but prosecutors said the miners could be charged again later.

President Jacob Zuma has indicated he would like to keep his seat when the ANC holds leadership elections in December. The judicial inquiry he has commissioned into the killings at Marikana is not due to report until the end of January. But that may not save him.

Marikana has potential to be the event that sparks South Africa’s long-talked-about “second transition,” the point at which the country reappraises the compromises and deals that were struck to secure the peaceful passage from apartheid to black majority rule in 1994.

The Marikana killings brought South Africa face to face with an ugly picture of itself as a place in which poor workers find themselves ranked against an unholy alliance of the government, the National Union of Mineworkers, Lonmin, the police and the judiciary.

Now this young democracy, just 18 years old, must decide how high a price it is prepared to pay for every ounce of precious mineral it extracts from its subsoil.