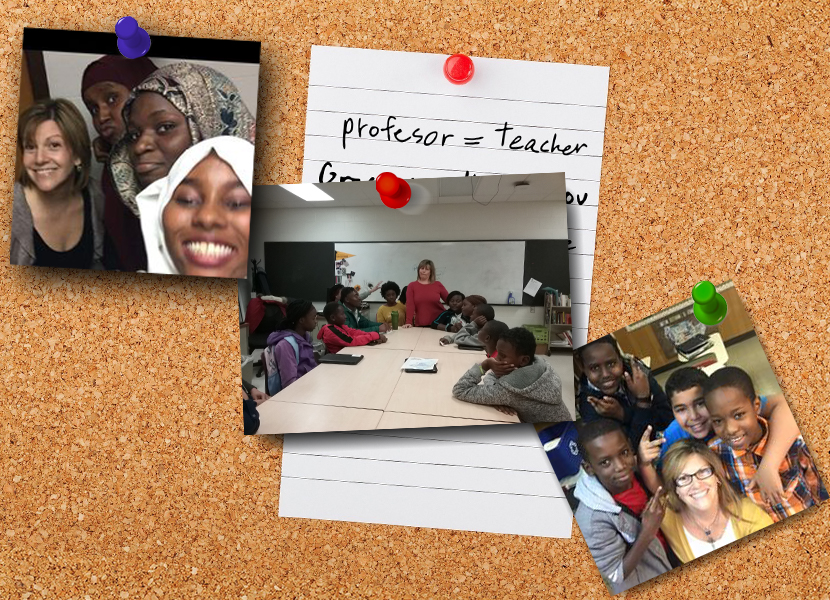 In this graphic collage, photos of English teacher Paola Sciaraffia among her middle school students learning English as a second language are shown. Originally from Chile, Sciaraffia in northern Kentucky for the past 14 years and has witnessed firsthand the transformation of her middle school into a diverse student body with children seemingly from every corner of the globe – from El Salvador to Somalia. (Photos courtesy of Paola Sciaraffia | Collage by Joshua Coe)

FLORENCE, Ky. — Students stream in and out of Room 202 of this northern Kentucky school all day long to visit with Paola Sciaraffia, a beloved teacher helping students learning English as a second language. She greets them with her familiar “I love you, baby” and embraces each as if they were her own children.

Sciaraffia has taught ESL classes at R.A. Jones Middle School in this city for the past 14 years and has witnessed firsthand the transformation of her school into a diverse student body with children seemingly from every corner of the globe, from El Salvador in Central America to Somalia in Africa.

During Sciaraffia’s long tenure, she has seen the number of ESL students increase from less than three dozen when she started in 2006 to more than 400 today. Whereas then foreign-born students represented a small percentage of the 650 kids at the school, today they compose about half the enrollment of 800.

Florence is a small city in northern Kentucky that lies southwest of nearby Cincinnati, Ohio, It’s home to about 33,000 people, with about 2,700 — roughly 8% — being foreign-born, according to the latest estimates by the Census Bureau. Many immigrants came from refugee settlement locations in Louisville and Columbus. Florence sits in the middle of both cities.

As an immigrant herself, Sciaraffia identifies with the experience of moving to a new country and learning a new language and culture. She’s originally from Chile and came to the United States nearly two decades ago in an exchange program for working teachers. She later settled in northern Kentucky.

In helping to create an effective ESL program, Sciaraffia credits Dr. David Rust, a new principal her very first year teaching at the middle school. Rust is now the superintendent at nearby Campbell County Schools.

“He called me to his office one day and he asked me to explain to him and educate him in everything that had to do with ESL acquisition, ESL instruction, and explain to him how we needed to approach this program in our school,” Sciaraffia says. “He trusted me as an ESL person myself.”

Sciaraffia and Dr. Rust implemented after school programs and meetings. They held a town-hall-style meeting every month. It allowed teachers and administrators alike to get to know the dramatic journeys of families. She and the parents would often talk about the sacrifices the parents made in coming to America, what being in America felt like, and the challenges they had and were facing.

“We just bonded with the communities. We opened the school to the community, we let them know that they were safe in the community and that we were there to educate their children,” says Sciaraffia.

Sciaraffia said her own life as an immigrant helps her connect with so many immigrant families.

“I support bilingual and bicultural in the lives of the student,” she said. “It builds skills and is something they will always be able to fall back on.”

Today, Sciaraffia said her middle school is a mix of foreign-born kids. She notes African students are either refugees or came to join families already settled in northern Kentucky. Many students from Guatemala came on their own during the wave of unaccompanied minors sent by their parents of the poverty-stricken Central American nation.

She said many immigrants who’ve arrived in recent years have suffered traumatic experiences in their homeland and, like soldiers returning from battle, suffer from post-traumatic stress disorder, or PTSD.

Sciaraffia can write a book with the collection of stories of her immigrant students.

She recalls one boy from Angola who was caught by militia and forced to drink gasoline, leaving burns on the left side of his face. He also can’t hear from his left ear. He also witnessed people getting shot and burned to death. At school in the U.S., she said, the boy kept to himself and would only draw people getting murdered or being on fire.

She said others suffered different trauma after literally walking here from Guatemala or El Salvador in Central America. “Can you imagine how miserable your life has to really be in your country, in your home, in your house, that crossing the border by foot sounds good?” she asks rhetorically.

Sciaraffia said she sees immigrant students come and go through the school system as their parents search for a job and a place to live, with many leave Florence to go to bigger cities like Louisville and Columbus.

Teaching ESL students is challenging for any teacher or school system, according to Sciaraffia, who said more experience — and learning to listen and be empathetic — helps teachers and school officials recognize the best way for them to learn.

“We are of course definitely doing the best we can but there’s so much that we need to learn culturally from these students that will allow us to set them up in a place where they’re ready for learning. I don’t know but there’s not enough time in a regular school day to do that,” she said.

Judging from the parade of students who visit her each day, who crave a hug and who rely on her encouraging words, Sciaraffia appears to be a beacon of light for Florence’s immigrant community.

Meredith Yahl, a former Report for America Corps member, covered health and COVID-19 recovery for the Northern Kentucky Tribune. This dispatch is part of a series called “On the Ground” with Report for America, an initiative of The GroundTruth Project.