Lone Star chaos: Postcard from a Texas journalist waiting to flip the lights back on 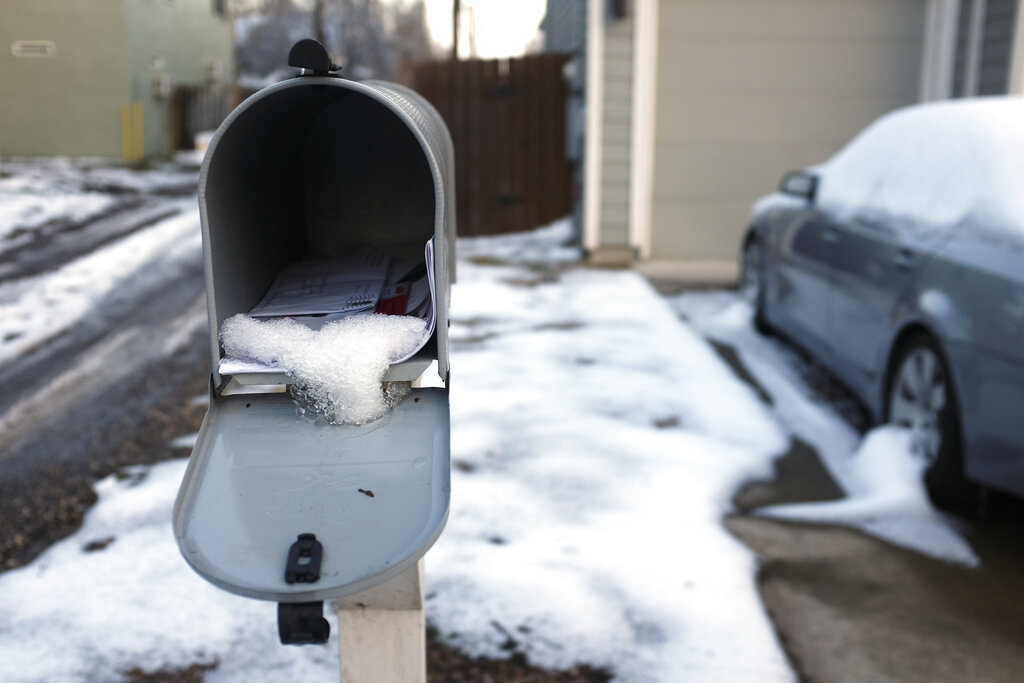 Snow and ice gather in a mailbox Thursday, Feb. 18, 2021, in Austin, Texas. Temperatures dropped into the single digits as snow shut down air travel and grocery stores.(Photo by Ashley Landis/AP Photo)

FORT WORTH – Like millions of Texans on Sunday night — which happened to be my birthday — I went to sleep expecting some power outages amid the unprecedented freeze and snow blanketing the state. I spent Valentine’s Day camped out at my grandparents’ home in the Dallas suburbs, talking with friends, who asked about the winter wonderland forming outside my window.

The next day, friends were reaching out for a different reason: to see if I was one of the lucky people who had electricity, water and food to eat as the state faced its greatest crisis since Hurricane Harvey hit south Texas in 2017. But, like so many others, my family was without power for more than 14 hours before the lights flickered on and the heater kicked in. That lasted for about an hour, before the blanket of darkness returned and we dragged my mattress toward the center of the house for warmth.

Losing electricity was only the beginning of the nightmare for millions of people clustered in the Houston, Austin and Dallas-Fort Worth areas. Many have struggled to keep warm in freezing homes, fearing that their pipes will burst and flood their living rooms. As temperatures dropped to the single digits, some looked for accommodations elsewhere, only to find hotels with skyrocketing room rates and unreliable power. Grocery store shelves have been wiped clean of bread and dairy products, with replacement shipments delayed due to icy roads and a broken food supply chain.

People seeking shelter told my colleagues at the Fort Worth Star-Telegram that they were left without cell service or adequate information about outages. A dog belonging to a man living on the streets died in the freezing weather. Disproportionate numbers of Texans were treated for carbon monoxide poisoning, and kids staying at a juvenile detention center were left without heat or adequate supplies.

Worst of all, at least 110 counties told residents to boil water before drinking it. That left some 7 million people without potable water and asking the question: How do you boil water when your stove is electric, and you still don’t have power?

Only adding to the confusion were mixed messages from state leaders on what caused the outages, as well as one mayor telling residents that “no one owes you or your family anything.” That frustration was compounded when the Lone Star state’s junior senator, Republican Ted Cruz, was photographed leaving for Cancun before quickly booking a return trip due to the national backlash.

Infrastructure woes, illustrated by the hundreds of broken water mains across the state, will continue to haunt cities for the next several weeks if not months. In the Dallas-Fort Worth area, communication about the boil notices was also haphazard, with residents finding out via NextDoor, Facebook or local news media rather than official government sources.

Even before the worst of the winter weather hit, our city already knew its deadly consequences. In the early hours of Feb. 11, as black ice covered lanes of Interstate 35 near downtown Fort Worth, 133 cars crashed into each other at high speeds. Six people died and 65 more were injured in the pileup that shocked our system and triggered an investigation from the National Transportation Safety Board, which is looking into ice prevention methods on the highway.

It’s difficult to encapsulate just how chaotic and frustrating the past week has been, not just for me and journalists reporting with limited internet and supplies, but for every single Texan affected by this crisis. Five days after electricity providers were ordered by state officials to cut power in an effort to save the electrical grid, we’re still struggling to figure out how this could have happened in the “energy capital of the world.”

There are no simple answers to that question, although news outlets have focused on the isolation of Texas’ electric grid and the “energy-only” market that does not incentivize operators to build extra plants and energy capacity for emergencies like this one. Political debates have been inflamed by claims that frozen wind turbines were to blame for widespread outages, when data provided by state agencies shows that large numbers of natural gas, solar, coal and other generators went down this week.

Are those hot-topic, wonky policy issues registering with the average Texan left in the cold by winter storm Uri? I’m not so sure. Once you stop looking at social media fights and start talking to readers, you find that most people just want to know why the state was not better prepared for this weather, and how there were so many communication breakdowns between government agencies and the people they are intended to serve.

“We’re not very good at assessing the risk of such unprecedented events,” Joshua Rhodes, a research fellow with the Webber Energy Group at the University of Texas, told me. “It’s like a [Category 3] hurricane made it all the way to Dallas. Theoretically, it’s possible, and theoretically I guess it’s possible for the entire state to freeze at the same time, but no one’s ever seen it happen.”

While the national spotlight will soon shift from Texas to another catastrophe, those of us still here will have our hands full as we track what happens next. Will large numbers of residents face extraordinary electricity bills due to high usage and rising rates? How will local and state officials respond to the growing infrastructure challenges posed by the storm? Are the most vulnerable populations receiving the help they need to get back on their feet?

It’s clear that Texans are not out of the woods yet. Thankfully, local journalists will be there to shed some light on what went wrong long after the lights come back on.

Haley Samsel covers environmental issues for The Fort Worth Star-Telegram. This dispatch is part of a series called “O​n the Ground​” with Report for America, an initiative of The GroundTruth Project. Follow her on Twitter: @haley_samsel.