What happens when local news disappears? 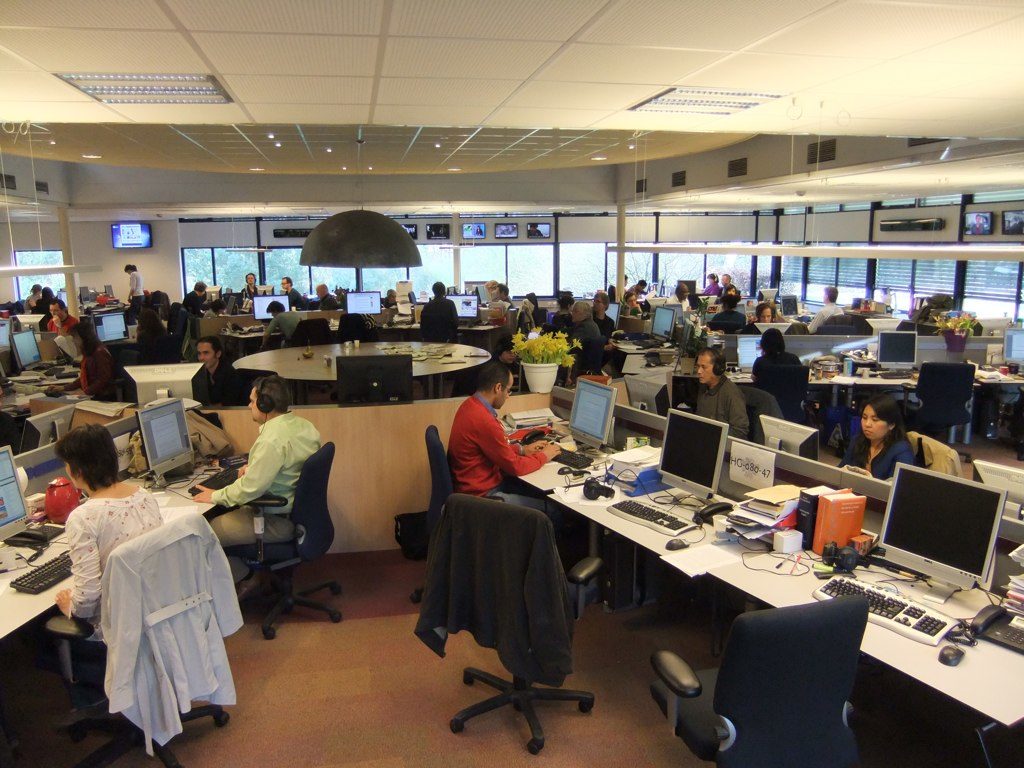 The disappearance of local newsrooms is creating news deserts, places where access to reliable information is limited. In the photo, RNW's newsroom in 2010. (James Cridland, via Wikimedia Commons

WASHINGTON — After 17 years covering the Maryland counties just outside the nation’s capital, editor Judy Hruz was “devastated” when she got word that The Gazette would be shuttered, along with its community affiliates.

“I never felt like it was my job. It was my mission in life to provide good quality, local journalism,” she said. ”It’s news [people] cannot get anywhere else.”

For almost 60 years The Gazette, which closed in Summer 2015, published community newspapers in Prince George’s, Montgomery, Frederick and Carroll counties in Maryland, covering more than a third of the state’s population.

Since its disappearance, those areas are edging closer to becoming a “news desert,” a place where access to quality reporting about the area is limited. These counties now rely on blogs, community forums and a few small but resilient papers like The Montgomery County Sentinel, which has been around since the Civil War.

A recent study from Duke University found that only 17 percent of local news stories are actually about the region they cover. Communities are increasingly lacking reliable sources of information. Researchers found that 20 communities had local news outlets that didn’t publish a single story about the people or events in their area.

Local television and radio are unable to pick up the slack, because these stations cannot cover the daily going ons of each municipality they reach. Currently, the four counties formerly served by The Gazette get their TV and radio news coverage from Baltimore and D.C.-based stations.

“Regional television doesn’t have the ability to get down to that level,” said Penny Abernathy, a journalism professor and Knight Chair of Journalism and Digital Media Economics at University of North Carolina-Chapel Hill. “Radio has increasingly moved away from that as it’s become increasingly bundled up by large conglomerates and often have very little time allotted for local news.”

Michelle Ferrier, an associate professor at Ohio University who specializes in media and news deserts, agrees.

“What we’ve found is that in many places that don’t have a newspaper, they lack the very basic communications infrastructure for the kind of communication that makes communities work,” Ferrier said.

For politicians and community leaders, reaching citizens is imperative. But without a proper news source, municipalities can feel disjointed.

“The only people who know what’s going on is the people you’ve chosen to communicate to, and there’s people you’ve excluded,” said Nancy Floreen, a Montgomery County Council Member. “There’s a group that is not engaged, not informed, and feels abandoned.”

Across the country, daily and weekly local papers like The Gazette are in peril.

Abernathy, who has done research on news deserts and their impact on communities, has tracked the changes in the media landscape from the last decade.

“And at the end of three years, if you’ve only paid three times earnings and it’s not a very big paper, and it’s still not making money, what’s the easiest thing to do? Say, ‘I didn’t pay much for it,’” said Abernathy. “‘If I can’t sell it, rather than continue to fund the losses, I just shut it down.’”

Aside from bringing communities together, some papers, like The Gazette in its day, can keep its bigger competitors in check.

“Competition is great. If you work for The Gazette, you don’t want The Washington Post to beat you on that story,” said Abernathy. “We have plenty of examples when a story is initially broken by a metro paper, then the local paper takes it over and runs with it.”

The Washington Post actually purchased The Gazette in 1992. Their reasoning for the purchase, according to Hruz, was “We could not beat you, so we decided to join you.”

The publications coexisted in harmony through Amazon’s Jeff Bezos’ purchase of The Washington Post in 2013. However, a couple years later, The Gazette and its community papers were closed, with executives citing “declining advertising revenue” as the reason for shutting down and laying off 69 employees and 12 reporters, according to The Gazette’s last front page story, which reflected on it’s closure and legacy.

The Gazette’s end created a sense of crisis for Hruz.

A journalism major from Penn State, Hruz started her career at The York Dispatch in Pennsylvania before joining The Gazette. After getting calls from concerned residents about the loss of their local paper, she decided to step up and two months after being laid off, she created her own print and online publication, The Greater Olney News.

The Greater Olney News covers all of Montgomery County, and is one of the few papers still in the area. With a population of over 1 million, Hruz never faces a shortage of news. “If you saw my desk right now, it is covered with possible story ideas,” she said. “Many of which we will get to, many of which we will never get to.”

Her publication has a staff with more volunteers than paid employees. “There’s one reporter, one art director, and me,” Hruz said. The Greater Olney News is distributed for free to all residents within Hruz’s coverage area. The publication sustains itself through advertising.

Even with such a small staff, Hruz knows each story they cover makes a difference. She tells a story of one woman who forgot her identification at a grocery store.

“The manager came out of the office, holding our newspaper. ‘The Greater Olney News wrote a story on her, that’s all the I.D. I need,’” Hruz said. “That’s the greatest success.”

Despite the often thankless work, Hruz maintains a passion for her craft.  “It’s all worth it because you have a service that people need,” she said.

Abernathy found four key lessons in her research that local papers should adopt to sustain themselves and fight the expansion of news deserts. At a Knight Commission testimony in April of this year, she broke them down:

Have a business model that fits your small market rather than mirroring larger papers.

“I think that the answer lies locally with those news organizations as well,” said Abernathy. “It involves establishing strong roots in that community.”