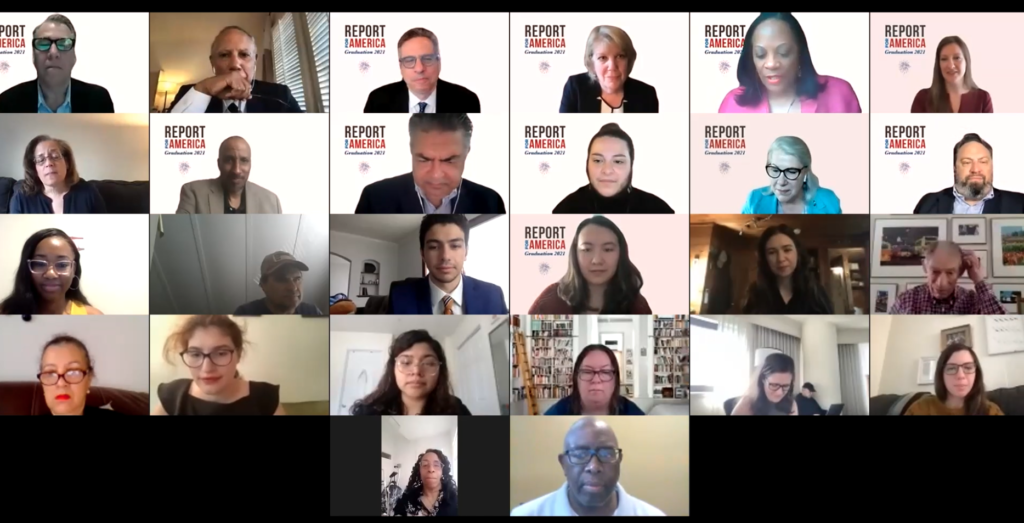 Report for America, the fast-growing national service program that places journalists into local newsrooms to report on under-covered issues, celebrated the graduation of 44 corps members Saturday in a ceremony that mustered as much pride, pomp and circumstance allowed by a virtual ceremony filled with scenes beamed via Zoom from living rooms and basements across the country.

What the graduates missed in grandeur, they gained in an inspiring speech from Dean Baquet, the top editor at the New York Times, who has a distinguished career as a Pulitzer prize winning local journalist. The Times’ executive editor elicited chuckles, smiles and admiration from the graduating class as he regaled them with stories about committing acts of journalism in Chicago and New Orleans during his time as a local reporter.

Fondly remembering a time when he covered federal, state and local courts all at the same time, “racing from building to building accumulating parking tickets,” Baquet said there is a desperate need for on-the-ground reporting by journalists who are always open to being proven wrong. As he congratulated the graduates, Baquet confessed his plan to “steal” the language Report for America uses to recruit local journalists — “talented, ethical, insanely hard-working, gutsy, open-minded, service-oriented journalists to inform communities and hold powerful institutions accountable.”

Launched in 2017 by The GroundTruth Project, Report for America positions itself as a nationwide effort to “rebuild local journalism from the ground up.”

Great journalists, Baquet told the graduates, are open minded and empathetic. They test their beliefs, they don’t look for affirmation, and are skeptical of absolute certainty. They are not skeptical of racism, or the existence of poverty or climate change; there are rights and wrongs and “we should call them out when we see them.”

And, as America faces a moment of racial reckoning, Steve Waldman, co-founder and president of Report for America, acknowledged that the nation’s mainstream journalism institutions have historically failed communities of color. Corps members are righting that wrong, he said.

With a new cohort being placed in local newsrooms next month, Report for America will have helped hire 300 journalists at more than 200 newsrooms in virtually every state in the country. Nearly half of them are journalists of color. About a fifth of the corps members who graduated Saturday were hired by their newsrooms, and a third continues to work in local journalism. Corps members serve from at least one to three years in the program.

“You stood for the idea that local journalism is a public service profession, in the same vein as teachers or nurses, and that meant serving people who appreciate you, and those who believe you are the enemies of the people,” Waldman said. “You did your service during an extraordinarily difficult time. That made your work even harder. We know that. But it also made the work even more important.”

And, in the process, the still nascent movement that Waldman cofounded to eradicate “news deserts” across America is showing a new path for local newsrooms to operate in a financially sustainable way.

“Your work has prompted most of your newsrooms to try to raise money from their communities and engage with their communities in ways that they hadn’t before. We call it the third revenue stream — philanthropy, donations large and small.”

Report for America operates on a model where the nonprofit raises money from individuals and national philanthropic foundations to pay half the salary of journalists it places in local newsrooms. The rest of the journalists’ salary is raised by the respective newsrooms from their local communities, thus building the foundation for a “community-minded” newsroom accountable to those who they write about.

In his closing remarks, Baquet told the graduating journalists to not get lost in social media bubbles and to enjoy being a local journalist, which he described as one of the most exciting parts of his 40-year career.

“You are doing important work, enjoy it, savor it, don’t let ambition and the hunt for the next thing keep you from enjoying the doing. Local news is vital to the country,” Baquet said. “It’s a laboratory, seize it.”

“This life in journalism, I can promise you as my career nears a close, is fulfilling. You’ll have heartbreaks for sure,” he added. “Along the way, I promise you, you will have more fun than anyone should.”

Report for America is a national service program that places talented emerging journalists in local newsrooms to report on under-covered topics and communities. Launched in 2017, Report for America is creating a new, sustainable system that provides Americans with the information they need to improve their communities, hold powerful institutions accountable, and rebuild trust in the media. Report for America is an initiative of The GroundTruth Project, an award-winning nonprofit journalism organization with an established track record of training and supporting teams of emerging journalists around the world, including the recent launch of Report for the World in partnership with local newsrooms in India and Nigeria.