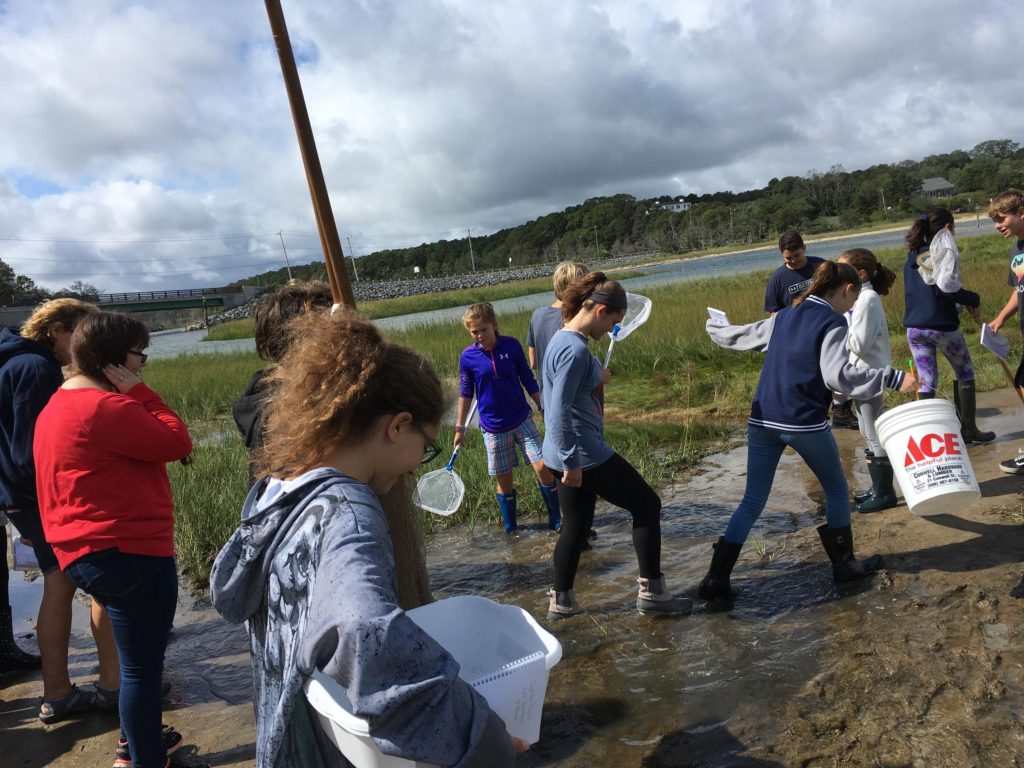 Seventh graders from Monomoy Regional Middle School heading out into the shallow water at Muddy Creek to see what kind of creatures they can find. (Photo by Samantha Fields/GroundTruth)

This is the second story in “Teaching the Future,” a three-part series published originally in WCAI.

The words “climate change” first appear in the state science standards in Massachusetts in high school, but the concepts first appear, in a real way, in middle school, in seventh and eighth grade science, which are all about systems and cycles, cause and effect. In fact, teachers say that middle school is often where students spend the most time learning about climate change.

One middle school on Cape Cod is trying to make those lessons stick by taking kids out of the classroom, to show them how climate change is affecting the place where they live.

It’s a little before noon on a Thursday, and a couple dozen seventh graders from Monomoy Regional Middle School have just piled off a yellow school bus at Muddy Creek, a tidal river and marsh on the border of Chatham and Harwich.

“We’re on a field trip learning about how the climate is affecting our seas,” said 12-year-old Owain Bok. Specifically, whether “Muddy Creek’s waters are healthy or not.”

They’re doing that with the help of Jesse Mechling, director of marine education at the Center for Coastal Studies, who is showing them how to test various aspects of water quality: from oxygen levels to salinity to PH.

In the days before this field trip, Mechling visited Monomoy to give a presentation to the kids on climate change, and how it’s affecting the oceans and the species that live in it, including on Cape Cod. Now, they’re here to see for themselves.

“I think it definitely makes it so that if you can see it in your backyard, you really know it’s happening,” said Nancy Gifford, who teaches seventh grade science at Monomoy.

Nationwide, about 70 percent of middle school teachers say they teach “recent global warming” in their classes, most for just a few hours a year, according to a report from the National Center for Science Education.

But Gifford teaches it a lot more than that, both because it’s something she cares deeply about, and because a lot of seventh grade science, as it’s laid out in the Massachusetts standards, is about ecosystems, and human impact on the environment, both of which are inextricably linked to climate change. Getting kids out of the classroom, to places around Cape Cod, is the best way Gifford has found to teach climate change in a way 12 year olds can grasp.

“I think it’s really important for kids to understand what’s happening right here, more so than other places,” she said. “In the past, kids would learn about climate change and they were picturing polar bears on melting icebergs. And we know that’s happening, but that’s far away.”

But the time and the money it takes to rent buses and go on field trips, even nearby, can be prohibitive for a lot of schools. To overcome that barrier at Monomoy, Melinda Forist, Nancy Gifford’s teaching partner in seventh grade science, spends a lot of time writing grants.

“We’re fortunate here that we have a lot of organizations that allow us to write grants, and those grants cover bus money,” Forist said. “Because we’re also very fortunate to have a lot of resources in the community where people are willing to teach the kids about climate change.”

For a lot of these seventh graders, like Caleb Neal, just the lessons they’ve had so far about climate change seem to be sinking in. “It definitely feels like something that’s happening and affecting Cape Cod,” Neal said.

Kaycee Gilley is particularly aware of how it’s changing the National Seashore. On visits there, she said, she’s seen signs that explain the connection between erosion and climate change.

“It makes me sad,” Gilley said. “I don’t want it to change a lot, because then we’ll lose a lot of land.” The idea of the Cape losing a lot of land in her lifetime also makes her nervous, she added.

That’s something Gifford thinks about a lot, in how she talks to her students about climate change: how to not make them too nervous.

“You have to walk that fine line where you’re not scaring them,” she said. “Because it is depressing when you think about some of the predictions that are being made and what could happen long-term.” Mark Wilson, the principal at Monomoy Regional Middle School, said that’s another reason he thinks it’s important to get kids out on field trips around the Cape as much as possible. “Rather than be overwhelmed by the size of the problem, we just look at it from, ‘what can we do in our own small footprint that we have here,'” he said. “And have students be attentive to what’s happening worldwide, but also what can they do, locally, to actually do something about it.”

That’s a philosophy that Todd Schumacher, who’s new at the school this year, is trying to bring into his seventh grade math class – or what he likes to call, “problem solving class.”

“The problem this year is global warming. And we’re going to use math to understand global warming,” he said. “And to brainstorm and maybe implement solutions here, locally, at our school.”

At this point in the year, Schumacher is having students use real data – local data, from Hyannis – to calculate the average yearly temperatures on Cape Cod for the last 125 years, “to determine if the climate is getting warmer.”

Later in the year, when they get into geometry, “we’re going to be calculating the area of the roof of school,” he said. “How many square meters is a solar panel? How much electricity does one solar panel produce? Calculate, can our roof produce all our electricity?”

Nancy Gifford hopes projects like that, and field trips like this one to Muddy Creek, will get her students thinking about climate change, and believing they can do something about it, she said. “These are the kids that will be servicing turbines, they’ll be the ones that are building the infrastructure to fix what gets flooded along the way, and they’ll be dealing with these continued storms that we’re seeing.”