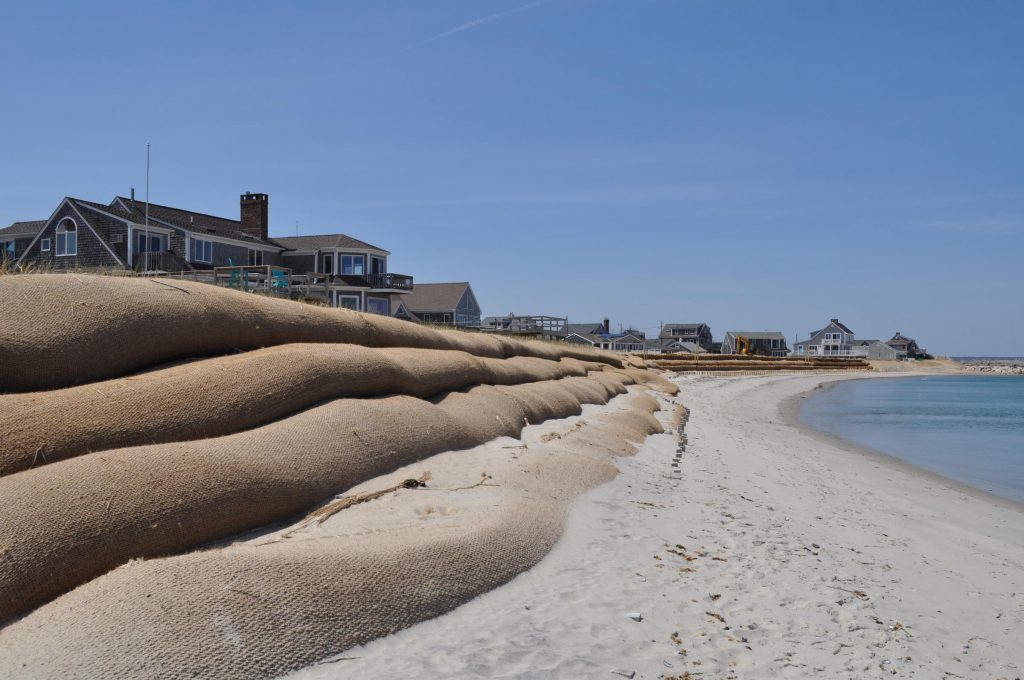 Samantha Fields is a GroundTruth environmental fellow. For the past six months she reported on the impact of climate change on Cape Cod for WCAI, the local NPR station in Woods Hole, Massachusetts. You can find her stories here.

When I arrived in Woods Hole in April for my reporting fellowship, my main focus was to look for stories on the human impact of climate change. In my research, I kept coming across articles about a series of late-winter storms that had hit Cape Cod back-to-back a month earlier. Nearly all of the stories  indicated these storms had been unusual, both in number and intensity, and that the damage had been significant. Many mentioned one town: Sandwich.

So I started calling around to people in Sandwich, a town that sits on Cape Cod Bay, along the edge of the Cape Cod Canal. Over and over again I heard the same thing from people there: In the last 5 years, there had been a shift in the climate — more storms, more intense storms, more erosion, more flooding, more flooding in places that had never flooded before.

That was how I ended up deciding to report several stories about Sandwich, and some of the questions residents were grappling with. Was it worth it to repair the town’s iconic boardwalk, damaged repeatedly by storms? Could they find $10 million to pull off a massive beach restoration project that would shore up the eroding dunes? Could they afford not to? What do you do when your oceanfront home is damaged beyond repair? How do you decide whether or not to rebuild?

These are all hyperlocal stories. But they are also stories about global climate change, and the real, tangible ways it is affecting one town, and the people who live there.

At an all-day workshop on “Telling Climate Change Stories That Matter” at this year’s Society for Environmental Journalists’ conference, Bernadette Woods Placky, a meteorologist and director of Climate Central’s Climate Matters program, said that for a lot of reporters, telling climate change stories “may be something you’re already doing. You just have to make the connection.”

How to do that? Here are a few suggestions:

1. Draw a clear connection in the moment.

The most effective time to report on climate change — the time when a story has the most reach and impact — is when something urgent is happening, like a major hurricane. Susan Joy Hassol, the director of Climate Communication, says that it’s valuable for journalists and meteorologists to make a point of explaining the connection between climate change and extreme weather events while they are front and center in the news, because once the danger has passed, fewer people are paying attention.

When it’s happening, when people are paying attention, that’s the right time to talk about it says @ClimateComms at #sej2018 pic.twitter.com/2K1OYGKeDj

After the fact, draw the connection between climate change and the long-lasting ripple effects of a storm, like what happens to people who are displaced.

In many ways, @ClimateComms says, “the climate refugee crisis had already started. Some of these people [displaced by Hurricane Florence] will not be able to go home.” #SEJ2018

2. Report on what is happening now, in the place where you live.

When reporting on climate change, “you need to localize and you need to make it tangible,” says @PGLocal4 at #SEJ2018 pic.twitter.com/HGzGSW9GDS

Climate change is manifesting around the country and the world in many ways, some dramatic and catastrophic, others subtle and creeping. Paul Gross, a meteorologist at WDIV-TV in Detroit, who frequently draws the connection between weather and climate change for his viewers, says it’s important to report on the ways it’s affecting daily life in your community. One example he raised is something my co-fellow, Pien Huang, reported on on Cape Cod: how climate change is making allergies worse.

“If you have allergies, that matters to you.” -Paul Gross, #SEJ2018 pic.twitter.com/oLeHhDVpkU

If you’re looking for data to help you localize different climate-related stories, whether on precipitation trends or longer pollen seasons — check Climate Central’s list of resources for journalists.

As Gross says, it’s important to localize climate change and make it feel tangible, Bernadette Woods Placky, of Climate Matters, says there is almost always a way to find a city or state angle on big international climate stories, like the release of the latest IPCC report on climate change. There is often also a climate change angle on stories that, on the surface, might seem unrelated — climate change intersects with so many other beats, from business to health to agriculture.

Just a few ideas of climate change-related stories coming up, from @BernadetteWoods and @ClimateCentral pic.twitter.com/d7Hk9OHVVk

It’s important to think about how you’re using language, when you’re writing about climate change, says Susan Joy Hassol, of Climate Communication. It can be easy for journalists to fall into using language that scientists or lawmakers use, language that can be confusing or misleading for most people. And the last thing you want to do is confuse or lose your audience.

I did a lot of both in writing my fourth and final story about the town of Sandwich, and how it’s trying to combat its unique erosion problem. In working on that story, I encountered a lot of jargon. The coastal processes specialist using “escarpment” to describe the way the waves had carved away the dunes, and “groin” to describe short rock jetties. The town officials using “Section 111” as shorthand for a complicated study the Army Corps of Engineers is doing, and “nourishment” to describe a project that would completely rebuild both the dunes and the beach. I made a conscious effort to avoid the jargon, and describe both the problem and the proposed solution, as clearly and plainly as possible.

Journalists – and scientists – have to be very careful not to use jargon in talking about climate change, says @ClimateComms at #sej2018. (Like “positive feedback” and “enhance” – which sound positive to most people but are actually negative when talking climate change.)

“If you know someone is going to lock up and walk out of the room if you say the words climate change, maybe those shouldn’t be the first words out of your mouth” says @climatecomms. One “side door” – talk to them about renewable energy instead. #sej2018 pic.twitter.com/5pMceCiVOk

Ultimately, Ed Maibach, professor at George Mason University, and director of the university’s Center for Climate Change Communication says, “the reality is, climate change has come home to roost in America. It’s happening here, now, to us.”