ON THE GROUND IN LONG BEACH, CA

Little Manila: A second glance at the culture of West Long Beach 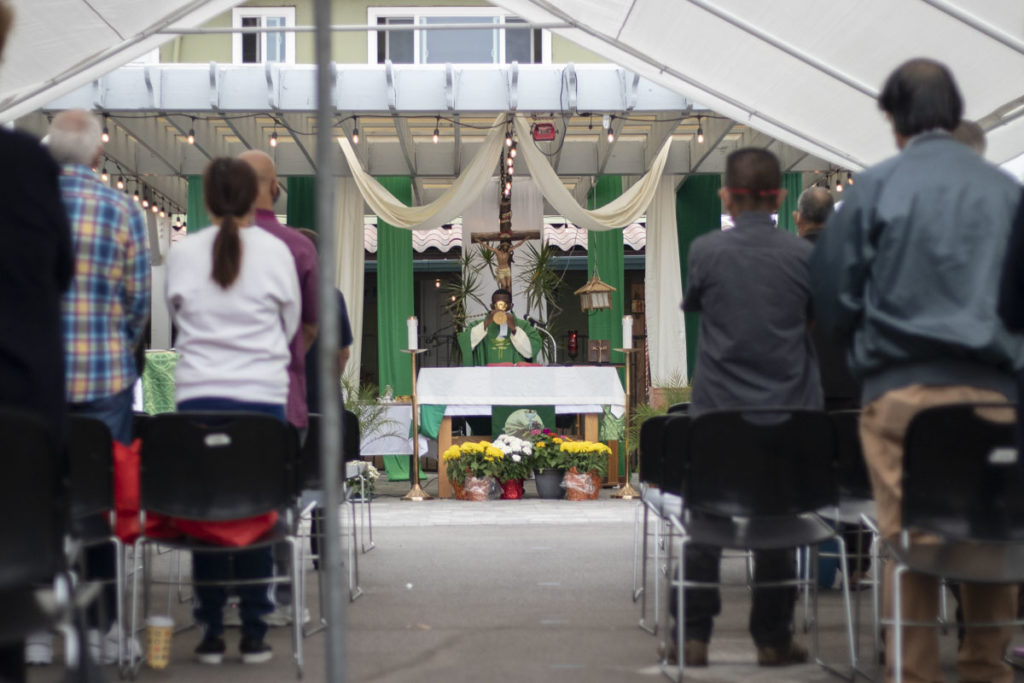 Father Thaddeus Agbasonu drinks from a grail as he leads Sunday morning mass outside St. Lucy’s Catholic Church in West Long Beach on Aug. 30, 2020. In response to the COVID-19 pandemic, the church began providing services to mostly Filipino attendees outside of its basketball courts that also function as a parking lot. (Photo by Crystal Niebla/GroundTruth)

LONG BEACH, Calif. — On a recent, hot weekday afternoon, locals scuttled around West Long Beach’s unofficial Little Manila, making their way to the market, to the bake shop, or to church on the wide Santa Fe Avenue.

At the corner of 25th Street, the Tambuli Supermarket, one of two of its kind in Little Manila, sits tall within a tiny strip mall near Edna’s Filipino cuisine and across the street from the Tailgate Bar, boasting produce, seafood and meat to all who pass on Santa Fe Avenue. Filipino people, food, customs can all be discovered down the market’s narrow, tiled hallways, shining with the lumpy reflections of visitors.

Greeted by American ‘80s radio from the Tambuli’s’s speakers and the warm breeze of fish, customers and grocery workers meet under the dim ceiling lights to exchange Philippine-centered ingredients, some directly imported straight from the country, such as kangkong (water spinach) or ube halaya (purple yams). Most of the ambient sound emanates from the fried food section—customers speaking in Tagalog ordering fried tilapia to go. It feels as if one has entered the house of a distant family member, different but familiar.

In Long Beach, there are 14,383 residents who were born in the Philippines, according to Census data, making it the largest Asian population in the city, just surpassing the more politically visible Cambodian population.

West Long Beach’s Little Manila is a part of town that bursts with life inside loquacious restaurants and a few local parks, where children play beyond dull and dusty apartment buildings and storefronts.

According to the Migration Policy Institute, this enclave is one of many around the world and more than 10 in the U.S. that represent a large Filipino immigrant and descendant population, which in California formed after waves of labor migration dating back to the 1960s and 1980s after the easing of U.S. laws and encouragement from the motherland.

“There’s really no other part of the city like this…” said Romero Hebron, who serves the Filiipino community through nonprofit work with the Filipino Migrant Center, which aims to break barriers to equity.

As beautification showered many other parts of Long Beach, West Long Beach seemed an afterthought. But Little Manila may soon see economic development — or gentrification, depending on who you ask.

Community roots are strong and continue to flourish, but residents are advocating for more daily necessities, like markets, pharmacies and banks to improve the quality of life in the area, tighten its community roots and continue a history of advocacy for labor rights, resources and improved infrastructure.

“Folks still want to see their neighborhoods developed and have access to important things like a bank, more grocery stores, healthy food and the parks to be fixed up,” Alex Montances, a community organizer for the Filipino Migrant Center, said. “…But I don’t think they want to be priced out.”

Council Members Roberto Uranga and Mary Zendejas, who oversee parts of this unofficial Little Manila in the westside, planned on attracting new business this year, bringing necessities like banks, markets and pharmacies. Those crucial needs, Uranga said, were made “increasingly clear” after COVID-19 hit, closing restaurants and limiting public transportation.

“I want to support our communities of color, especially in our westside, by identifying barriers and unlocking their potential,” Zendejas said, emphasizing that other council members are also on board.

The bakery, remodeled two years ago, welcomes its customers in fresh, white walls adorned with potted plants and shelved food products. A woman with her child mingles in line with an employee serving her to-go food, speaking in Tagalog.

Customers can order comfort food such as chicken adobo, a Philippine cuisine that involves marinating meat in vinegar, soy sauce, garlic and black peppercorns, browning it in oil, and serving hot, simmered in its own juices.

“Filipino-owned businesses contribute to the Filipino identity of West Long Beach in many ways,” said owner Catherine Tolentino. “… As a Filipina restaurant and bakery owner, it’s important to me to share Filipino culture and traditions through our food by using ingredients native to the Philippines and recipes that were passed on to me by my family.”

Tolentino said she’d love to see more Filipino-owned business, not just in Little Manila, but across all of Long Beach.

“Increased representation in the city helps empower not just Filipinos, but minorities in general,” she said.

Before World War II, many Filipinos worked on docks canning fish in Terminal Island in San Pedro, a neighboring community of Long Beach. In the three decades following the 1930s and 1960s, labor rights organizations gained strength due to the activism of Larry Itliong, Cesar Chavez and Dolores Huerta.

The first major wave of working class Filipino migrants formed after the war in the 1940s as Filipino veterans came to settle in the U.S. Later, more labor opportunities attracted them.

Labor rights activism in California was at a peak from the 1950s, with a strong union presence in steel worker strikes to the Delano Grape Strike in 1965, when immigrant-led unions joined forces for a strike involving thousands of workers. But today’s Filipino community advocates say the momentum died down as immigrants aged out in the 1990s. Consequently, the political mobility of the Filipino community halted, and Filipino representation declined with it.

In more recent history, Montances, the community organizer, believes that when his organization started mobilizing residents there was an uptick in Filipino activism unseen since the 1990s.

“Maybe some of the community leaders weren’t as visible. Maybe folks aged out,” Montances said, referring to the activists before him.

“I feel like there was some kind of gap in Filipino visibility in Long Beach,” he said. “But there’s no doubt that in the more recent years, folks have been coming together.”

The center made it a mission to engage and politically mobilize the Filipino community, often putting older Filipino natives and young Filipino Americans in shared spaces, raising awareness on public health, helping Filipinos escape abusive labor trafficking or joining other organizations for a youth investment campaign.

Recently, and perhaps as a result of these grassroots efforts, he’s seen “a Filipino American renaissance” in the last few years.

“We’re starting to see each other and work with each other,” Montances said.

For 36-year-old Montances, moving from Takoma, Washington to Long Beach, California to study at Cal State Long Beach was an identity game-changer. In Washington, he was usually the only person of color in a classroom. The only other Filipinos he was exposed to were his parents.

“You’re American at school and Filipino at home,” he said.

After moving to California, he started to see other people that looked like he does, which brought him joy.

Being Filipino means fighting for the rights of people, Montances said.

Whether it’s keeping native languages alive, being soothed with Filipino cuisine or pushing for social equity, West Long Beach’s Little Manila was always there. People just had to find it.

Crystal Niebla covers West Long Beach for the Long Beach Post. This dispatch is part of a series called “On the Ground” with Report for America, an initiative of The GroundTruth Project. Follow her on Twitter: @crystalniebla