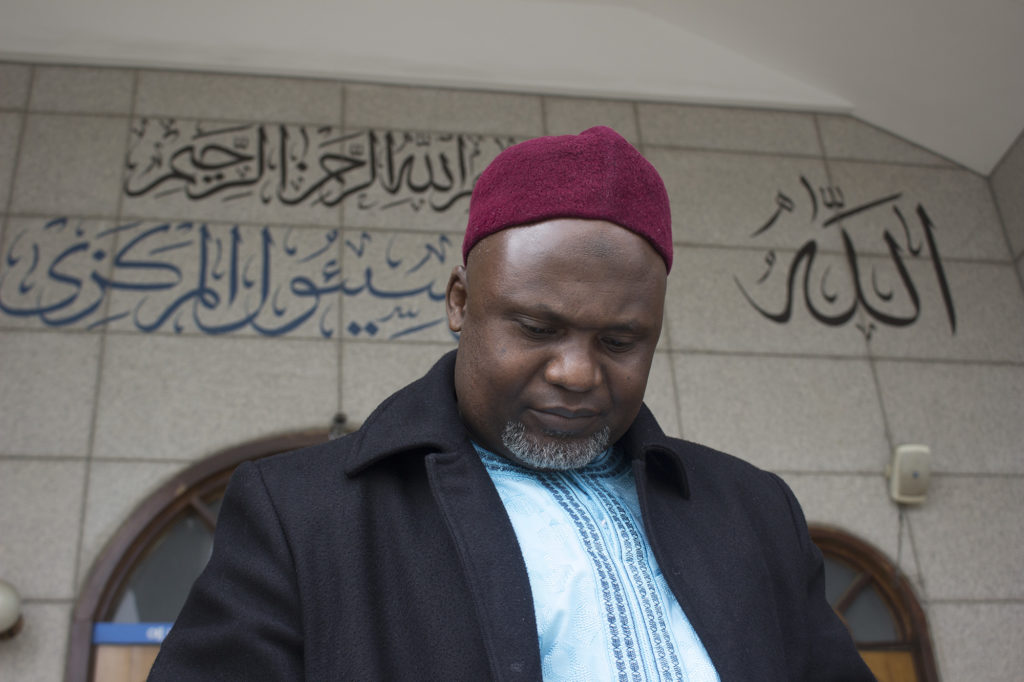 A worshippers stands outside of Seoul Central Masjid, the heart of the Muslim community in Korea. (Razzan Nakhlawi/GroundTruth)

“Koreans who have visited Turkey visit my shop for these sweets,” says Ebru Uzun, the Turkish proprietor of a Turkish bakeshop in Itaewon, the Muslim district of Seoul. “This street is the home of halal food in Seoul, it’s very popular.”

Uzun migrated to Korea 14 years ago, after her husband found work on the peninsula.

She opened the bakery, Istanbul Delight, after attending university — her store is a standout on Usadan-ro, which translates to Muslim Street, with the bright orange interior and glass cases beckoning passers-by to her syrupy baklavas.

Turks were the first Muslim group to come to Korea in the 1950s, when Turkish Brigades provided aid to the country during the war. The Brigades’ imam, Abdulgafur Karaismailoglu, preached to Koreans visiting the Turkish army camps and soon expanded to public proselytization.

Now, “Muslim Street,” is a cultural hub for foreigners from the global South brought together under one ummah, or community in Arabic. In Korea’s homogenous population, where over 96 percent of the country identifies as ethnic Korean, the 100,000 or so Muslims in the country have banded together in dedicated enclaves.

Itaewon has undergone many transformations. It used to house a large U.S. military base, which gave rise to a vibrant nightlife, including the active queer scene on what was called “Homo Hill.” Now, walk up the hill to Usadan-ro and there are halal restaurants and butchers, tailors, madrasas or Islamic sunday-schools, as well as the occasional travel agent or electronics store. But the mainstay is the halal grocers.

At one of these grocers, Zaffran Mart, Mohammad Shohan Khan exemplifies the average resident of Muslim Street. An economic immigrant from Dhaka, Bangladesh, Khan settled here two years ago to work for his relative’s growing Zaffran franchise. He works as a cook at the adjoining restaurant, but he was tending the store counter for a colleague. He’s overqualified for both positions.

“I was a pharmacist in Bangladesh. I studied pharmacy at university, but the last time I did this in my country, it was ten years ago,” Khan sighed, “I thought I had to go some other way in this world, I like to travel. In Bangladesh, the money was good but I wanted to see somewhere else.”

Despite his poor Korean, Khan knows a bevy of languages; English, Malay, Hindi, Bengali and Urdu. Although the Bangladeshi have one of the largest presences in the area — 12,000 total in Korea —it is difficult to tell from the assortment of nationalities present, especially on Friday or Jumu’ah, the major day of prayer in the Muslim week.

“You can meet people from so many countries at the mosque.” Khan said, “Today is Jum’ah, all the Muslim people go: Turkish, Egyptian, Tajikistan, Arabian, Nigerian, Bangladeshi, Pakistan, India. So many people come here.”

Back at Uzun’s Turkish bakery, a group of Muslim visitors to South Korea walked in for tea and pastries. “Salam Alaikum, sister,” one of them addressed Uzun in English, “It is Friday, give me one tea free. Jumu’ah Mubarabakah!”

The group, three men and one child, are medical tourists from the Middle East, and they represent a growing number of visitors to Korea, and visitors that Korea is actively recruiting. This group are long-term residents of Vabien Hotel in Jung-gu, their temporary homes while they receive treatment.

One of the men, giving only his first name, Sayyah, described being hit by a car in Abu Dhabi. He woke up from a year-long coma with lowered brain function, “It’s difficult for me to think. It’s hard.”

Sayyah says he is seeing a specialist in Korea because there is a lack of of affordable healthcare in the United Arab Emirates. “They say [the treatment] will take a year but in three or four months, I will go [home]. Inshallah.”

The heart of ‘Muslim Street’

Life on Usadan-ro revolves around the mosque. Shops and restaurants close when prayer is called, and foot-traffic flows upward towards the towering structure. Seoul Central Masjid sits a high elevation in Itaewon, with clear views of the rest of the city.

In the 1970s, during a time of warm relations between Malaysia and South Korea, Malaysian Prime Minister H.E. Tunku Abdul Rahman donated money for the construction of Seoul Central Masjid. It was complemented by a 5,000 square-meter donation of land from the Korean government. Since its opening in 1976, the mosque has served as a nerve center for all Muslim activity on the peninsula.

The imam of Seoul Central Masjid is a Korean convert. Abdul-Rahman Lee, previously known as Ju-Hwa, was raised Roman Catholic but found Islam during his time at university. As the spiritual beacon of Muslim Street, Lee has the task of guiding the community.

“This place used to be a U.S. military base,” Lee said, “It was just beauty salons, or drinking places, bars and nightclubs. Now you can see how many halal restaurants and how many halal butcher shops [we have.] This street has changed.”

This sliver of Itaewon may be morphing into a different community again. On the other side of Usadan-ro, tattoo artists and vintage streetwear stores are making a slow creep toward their Muslim neighbors. At the base of Muslim Street, there are two new minimal-looking storefronts; a bacon butcher connected to a bed and breakfast conspicuously named ‘MOSC’.

“It stands for Mansion of Seoul Community. It’s not related to the mosque,” said the twenty-something owner, who didn’t want to be named.

Imam Lee doesn’t, or maybe can’t, see it as an affront to the community, “It’s not an Islamic country, you see the gay bars down the street. It’s okay, we live together.” He gestured toward the bacon store, “If it could change to Islam, it would make us comfortable but if it can’t, what can you do?” he sighed.

Lee politely excused himself, as imam, he had to lead the next round of prayers. People of all nationalities flooded the street once more, making an exhausting hegira toward their own polestar of Muslim life — not anywhere near Medina, Saudi Arabia, but here in Seoul, Korea. “Allah created man and woman, tribes and nations. Why? For understanding each other,” Lee said before leaving, “We are living together, we cooperate together and we exist together.”