ON THE GROUND IN PARADISE, CA

Life in Paradise: A deadly wildfire raged. Then the pandemic hit. 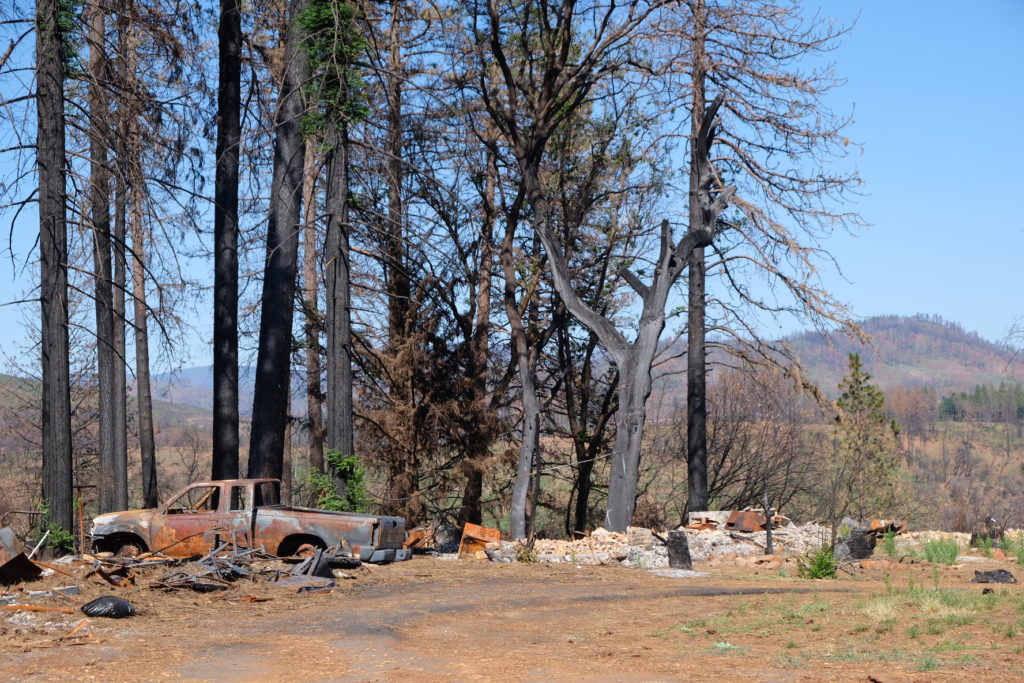 A burned-out truck and some ruined stonework are among the debris at a lot in Paradise on June 20, 2019. Debris from the Camp Fire has been removed from almost every lot in town since spring, when flowers bloomed from the red dirt, and replaced in some cases with new construction and trailers. (Photo by Camille von Kaenel/GroundTruth)

CHICO, Calif. — Business was finally picking up in Paradise, the Northern Californian town that was devastated 17 months ago by the deadliest and most destructive fire in the state’s history, the Camp Fire, which killed at least 85 people and destroyed around 14,000 homes. Then COVID-19 hit.

So far, Butte County has seen few hospitalizations from the coronavirus and zero deaths. The number of confirmed cases has stayed at 16 for the past week. But the crisis highlights some of the area’s acute vulnerabilities: The county has more people over the age of 65 than the state average, according to the 2019 Community Health Assessment, as well as slightly higher percentages of hypertension, kidney disease, pulmonary disease and asthma. The only hospital in Paradise closed due to damage from the fire and critical recovery efforts have slowed to address the current crisis.

The unfolding changes to daily life in Paradise reveal the cumulative toll of disasters in a short span of time, further endangering vulnerable people while also testing the viability of hard-earned lessons on survival, communal trauma and resilience.

The spring sports season, for which kids traveled hours from their temporary homes, is no more. The Theater on the Ridge cancelled its April production of “Love Letters.” In town, where the population dropped from 27,000 to around 4,000 after the fire, restaurants and small businesses that only recently reopened are again shuttered indefinitely.

As the community reckons with the mounting toll of the coronavirus outbreak, it’s pulling directly from its experience of survival to adapt to the current moment officials lead schools and public meetings remotely, neighbors are checking in on each other by phone and social media; disaster relief groups that never really left are mobilizing extra aid and people already dealing with post-traumatic stress are implementing learned coping mechanisms.

It’s been hard, though, to find signs of positive momentum. Jenny Lowrey, the leader of From the Ground Up Farms, Inc., a non-profit helping the recovery, said the precipitous job loss due to coronavirus has delivered people right back to where they were after the fire, scrambling for scraps. A Paradise builder called the public health crisis a “double whammy.” For now, construction on new homes continues as essential business—an important, single ray of hope for residents. Most everything else has ground to a halt.

That includes Nic’s Food, Beer & Wine, Paradise’s first and only brand-new restaurant upon its opening in September of 2019, when there were only around 3,500 residents and the utility company regularly shut off power to avoid sparking another catastrophic fire. This is only the second time it has closed since it opened its doors.

Its owner is Nicki Jones, 75, a resident of Paradise for over 20 years. Jones lost her home and two businesses to the fire, but said she never doubted coming back to the place she feels most at home.

The restaurant was a leap of faith and, to many in the community, a sign of hope. It showed that the town could do more than recover part of what was lost; that it could grow and take on new shapes, too. A communal room was booked by groups of quilters and social clubs even before opening day. People came for Friday football nights and for occasional live music on Saturdays. Jones hosted birthday parties and catered events.

“My goal is for people to feel at home. I want this to be a place to heal,” Jones said at the time.

She’s quick to smile and laugh with friends, with bright eyes and constant energy. The local chamber of commerce director has called her a “pillar of the community” and friends have suggested she run for office, but Jones has politely declined. She says her role model is a 98-year-old woman she saw on the news one day who’s still running her cleaning business. Her seven-day work week is a proud choice.

And so the recovery went on, haltingly but ever forward. On the morning of the fire’s first anniversary, November 8, people poured into the parking lot across the street from Nic’s for commemorative events. Friends and neighbors who had not seen each other in a year held each other tight. For once, the inimitable Jones seemed diminished. Her hands trembled as she remembered friends and acquaintances who’d lost their lives.

It was among the rare times Jones closed the doors to her businesses, out of respect for the moment, she said. A few hours later, though, Nic’s opened for lunch. The people came, and Jones did her part as always, flitting to and fro.

She soldiered on like this until early March, the onset of the COVID outbreak.

Initially, Jones tried to keep the restaurant open, reconfiguring the dining room, then going to curbside delivery only. Even then, people from the town continued to congregate outside her restaurant, searching for connection as tensions rose. But as the news continued to break about the spread of the disease, she came to terms with it. She didn’t want to put her staff at risk and closed.

Suddenly, the same social bonds that carried the community this far became one of its greatest vulnerabilities. They are now isolated inside their homes, some of them still crowded into trailers as they wait to rebuild what was lost; where once they pulled strength from gathering close and rallying for recovery, now they face the uncertainty apart, not knowing if their community will survive.

“We’ll be back,” Jones told her community. “And they said, we’ll be back too,” she said. “There’s a big sense of that here, and I’m grateful for it.”

It wasn’t difficult to remember the recent times they lived after disaster—the desire to be together and support each other, marching slowly toward a new normal.

“We take care of each other, and that’s what feeds me,” she said.

For now, Jones is isolating herself. To her surprise, the forced pause hasn’t been too hard on her. Jones is already thinking of other ways to give back to the community, if she isn’t able to open the business back up. Perhaps she’ll volunteer at an animal shelter. One thing she’s sure of: finding the will and the creativity to emerge from—to survive—the uncertainty. She has done it before.

Camille von Kaenel covers wildfire recovery in Northern California for the Chico Enterprise-Record & The Ukiah Daily. This dispatch is part of a series called “On the Ground” with Report for America, an initiative of The GroundTruth Project. Follow her on Twitter: @cvonka.