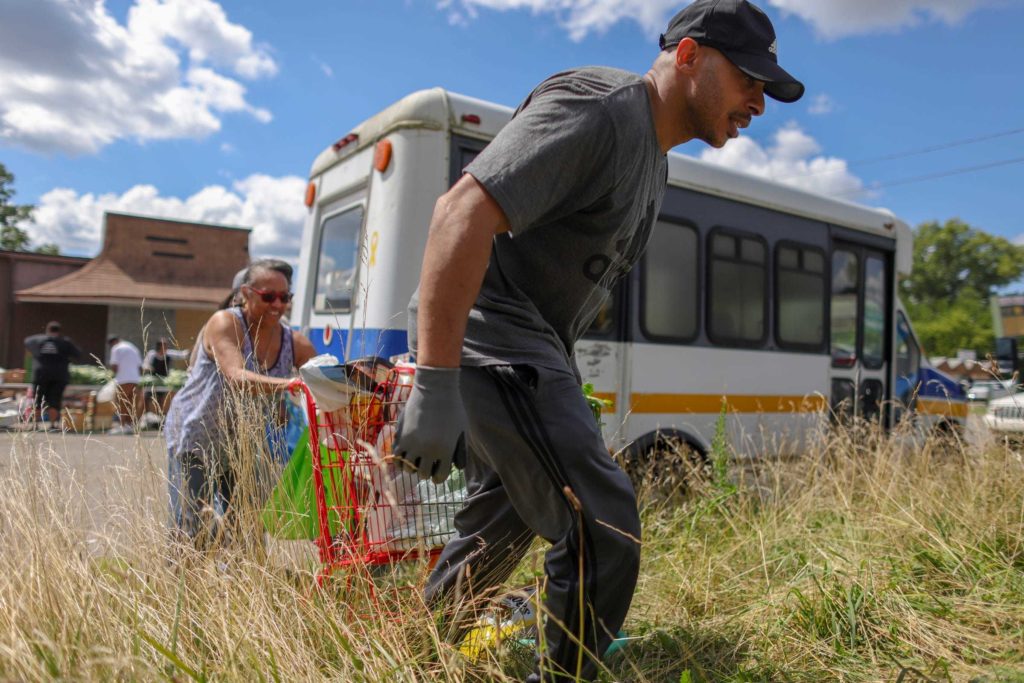 Demetrius Knuckles helps Belinda Dickerson push her cart to her car after picking out food donated by a food bank in Inkster, Mich., on Aug. 10, 2019. Knuckles has rededicated his life to building up the community after prison. (Photo by Kimberly P. Mitchell/Detroit Free Press)

DETROIT, MI — On a Sunday afternoon in summer, Demetrius Knuckles popped open the trunk of his Trailblazer and pulled out plastic bags weighed down by fresh produce and cartons of eggs.

Church had just let out across the street, and congregants were spilling out of the small brick building. Knuckles was there to hand out the groceries to them, his way of giving back in one of the Detroit neighborhoods where he dealt crack cocaine as a teenager.

Knuckles gestured toward a nearby empty lot and recalled how this neighborhood, just north of Hamtramck, once thrived. He reminisced about the 1980s, when parents felt comfortable sending their children to school here and kids played in a field behind the police precinct.

“There was a sense of promise, potential — a future,” Knuckles said.

Many of the homes he remembers have since been demolished or abandoned in a city where tens of thousands of houses sit vacant.

Knuckles was arrested at 17 and sentenced to life in prison following a murder conviction. He served 28 years before he was resentenced and released in 2018, thanks to a 2016 U.S. Supreme Court ruling that automatic life sentences without parole for juveniles should be applied retroactively.

Now 47-year-old Knuckles is trying to repair the damage he says he contributed to more than three decades ago; he takes some responsibility for the addiction and violence that has long gripped communities like this one.

Detroit is slowly emerging from decades of staggering economic decline. Once the nation’s fifth largest, the Motor City’s population has shrunk from 1.85 million people in 1950 to an estimated 672,662 today, an exodus driven by white flight and the draining of auto industry jobs to the suburbs, Mexico and overseas.

While Detroit’s 7.2-square-mile downtown and Midtown neighborhoods enjoy recent redevelopment, thousands of residents across this sprawling, majority-black city suffer the consequences of economic and racial inequalities: water shutoffs and tax foreclosures, to name a few.

Still, hardworking, creative and enterprising residents shape and define this city. Men and women like Knuckles, seeking a future after prison, are a fundamental component of the city’s revival and Detroit’s greater success. The Michigan Department of Corrections releases about 9,000 people on parole every year statewide, and about 25% go to Detroit’s Wayne County, the state’s most populous. That’s roughly 200 people a month.

Finding a job with a criminal record can be particularly tough and, across Michigan, roughly 60% of people on parole are out of work, according to the Department of Corrections. In recent years, some local governments have implemented policies to prevent job application discrimination.

Other challenges for people returning home from prison aren’t so obvious. Unpaid child support can snowball into tens of thousands of dollars in debt while a person is incarcerated. It’s largely avoidable, but the steps to prevent this burden aren’t common knowledge among people in prison. One man saw his child support obligations swell to more than $72,000 while he was incarcerated. Another Detroiter, who landed a job making $14.50 an hour at an automotive plant, sees $120 deducted from each paycheck to pay off about $14,000 in debt he accumulated while behind bars.

Leonard Fantroy, a 41-year-old Detroiter who, after he started going blind in prison, traded a life of dealing drugs to start his own landscaping business. He needs financial assistance to grow his business, but his credit score holds him back.

“I can go get a pound of weed or a kilo of cocaine right now quicker than I can get a loan,” Fantroy lamented.

Yet after three prison stints, he says he’s determined not to return behind bars, especially now that he’s legally blind and his eyesight continues to worsen.

The Detroit Free Press created a survey for formerly incarcerated individuals to help inform the newspaper’s reporting on reentry. Some respondents list graduating from college or reconnecting with their families as their greatest success after prison.

For many, the privileges that most people take for granted have greater meaning after incarceration. One man in his 30s rejoiced in getting his driver’s license. Another man in his 70s recently voted for the first time.

The survey also asks readers to share the greatest misconception about them. Most say it’s that society thinks they’re irredeemable; it’s hard to fully reintegrate when you bear a scarlet letter.

But the resilience of Detroit and its residents is no myth. Most of the emails the newspaper receives in response to stories about people returning home from prison are positive. Usually, it’s correspondence from readers who want to share their own experience with the criminal justice system or express their support. Many Detroiters know someone who has been incarcerated, and many are willing to give others a second chance. There’s a common thread in these stories: tenacity.

Angie Jackson covers formerly incarcerated citizens for the Detroit Free Press. This dispatch is part of our series called “On the Ground” with Report for America. Follow her on Twitter: @AngieJackson23.

A version of this story appeared on USA TODAY on February 20, 2020