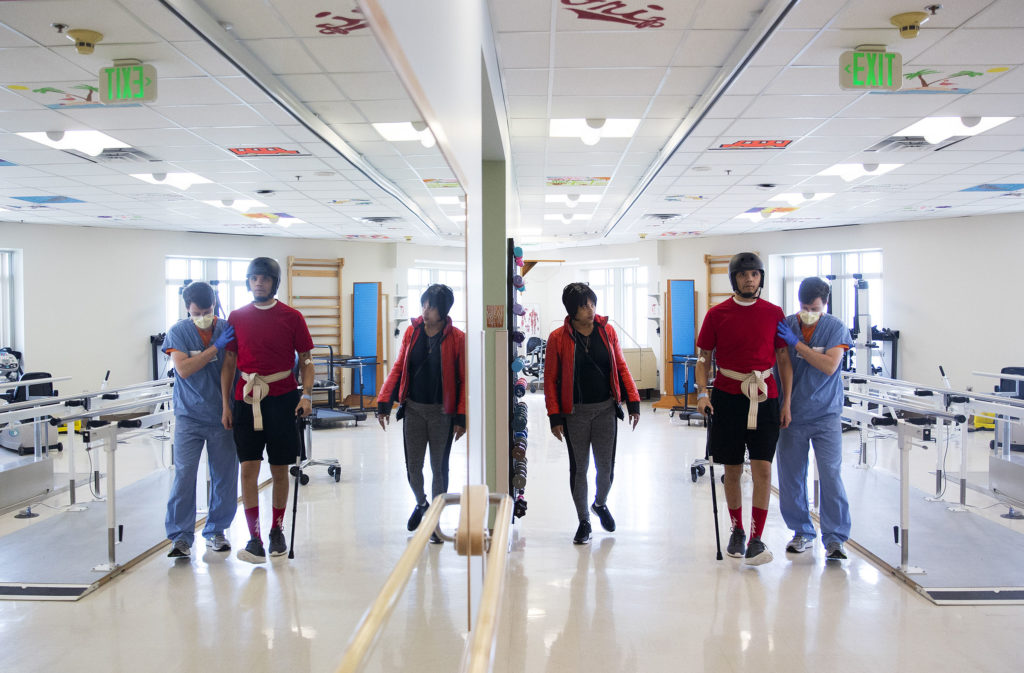 DaShawn Horne walks with a cane as his physical therapist Trevor Bouten holds him up on Thursday, April 26, 2018, at Harborview Medical Center in Seattle. (Photo by Megan Farmer/KUOW/The GroundTruth Project)

In January of 2018, DaShawn Horne was the victim of a brutal, racially-motivated, unprovoked hate crime. After meeting a woman at a Seattle, Washington nightclub, he went home with her to spend the night. The next morning, as he was leaving the home to get into his Lyft, the woman’s brother attacked him. In the moments immediately following the beating, the attacker recorded a video on his cell phone.

“Homie. Get the f-ck up, homie,” rasped the voice behind the iPhone camera, as if the person speaking just exhausted his voice screaming.

The video showed 26-year-old DaShawn, lying face down on a pile of rocks, unconscious, blood streaming down his face.

“That’s what happens to these n————rs out here, huh,” 18-year-old Julian Tuimauga continued, his voice ratcheting up with intensity. “THAT’S WHAT HAPPENS TO YOU N————RS OUT HERE, BOY.”

From the side of the frame, the weapon Tuimauga used to beat DaShawn over the head within an inch of his life appeared: a 32-inch aluminum baseball bat. Police thought they were responding to a homicide. But when they arrived, DaShawn was still breathing.

The attack itself lasted a matter of minutes, but left DaShawn in a coma at Harborview Medical Center in Seattle for six weeks. He suffered a traumatic brain injury and had to relearn everything he once knew, including how to walk and how to talk. He underwent multiple surgeries, including a craniectomy, meaning that a portion of his skull was removed to relieve the pressure on his brain. He lost his sense of taste and smell and suffered from aphasia, a communication disorder that impairs the ability to process language and express speech. Occasionally, DaShawn would call people by names that weren’t theirs. Or he’d see someone in the hallway he thought he knew, but had never met. After spending 103 days in the hospital, he went home to Auburn, Washington.

Over a year and a half later, he’s still recovering.

Hate crimes have been on the rise since 2011 in Seattle. In 2017, there were 234-hate motivated assaults in the city, almost double from the previous year. According to the FBI, African-Americans were the most targeted both years. Hate crimes have increased in Washington state as well. Nationally, hate crimes increased by 17 percent in 2017, while Washington saw a 32 percent increase. But after news headlines on hate crimes fade, victims and their families live with their assaults much longer.

“Love will always conquer over hate,” DaShawn’s mother, LaDonna Horne, said standing in the middle of the courtroom during Tuimauga’s sentencing. “That is why DaShawn is still here.” She asked for justice for DaShawn.

Judge Julia Garratt of King County Superior Court said that she could empathize with the Tuimauga family in their grief over losing their son to incarceration. “However,” she said, “I must balance that against the impact against Mr. Horne and the prison that he, through no fault of his own, has been locked in since January, and will be locked in for the foreseeable future, if not the remainder of his life.”

She sentenced Tuimauga to the maximum sentence, 13.3 years.

Smiling, LaDonna leaned over to DaShawn and whispered, “We won.”

These images were taken over the course of roughly a year and a half. I am still documenting DaShawn’s progress today and I plan to continue.

During a candlelight vigil for DaShawn while he was in a coma, I introduced myself to LaDonna. We exchanged contact information and met a couple of days later to discuss the possibility of me documenting DaShawn’s recovery long term. LaDonna wanted everyone to know exactly what happened to her son and to her family. As a result of that, I never had to justify my presence with them. We were on the same team, with the ultimate goal of sharing the truth of how their lives were abruptly broken wide open. I spent as much time as I could with them.

My goal with these images is to show the reality that hate crime survivors and their families are left with long after the violent attack itself is over. I hoped that the pictures would also speak to the fact that, while DaShawn’s life was forever changed, so were the lives of everyone who loves him.

His mother, LaDonna Horne, who dropped everything to care for her son, slept on a small cot in his hospital room for weeks. His sister, Da’Nesha Mitchell, who came home from Eastern Washington University, where she was majoring in psychology, to be his full-time caregiver. His son Deion, who was too young to understand what had suddenly happened to his father.  This incident rippled outward and impacted an entire community.

At a time when hate crimes are on the rise nationally, I aimed to broaden our conversations to not only consider the incident, but also the aftermath, for survivors of hate, as well as their families.