High hopes: How a Kentucky mother is fighting back against the opioid crisis 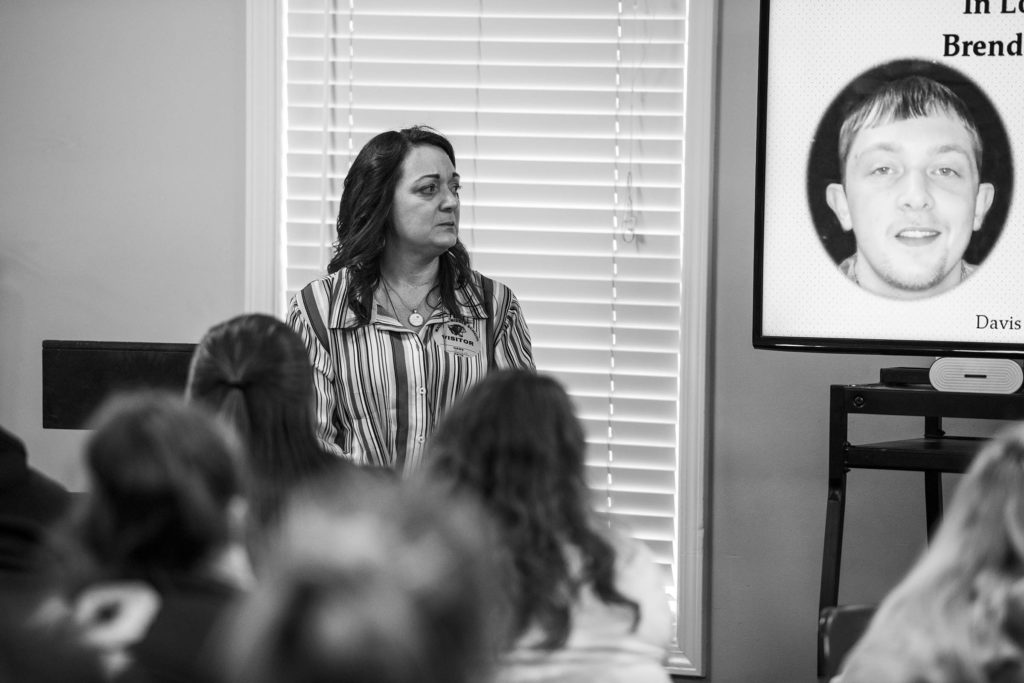 Nikki listens to the 911 call she made while speaking at Liberty Place Recovery Center for Women in Richmond, KY. She plays the call everywhere she speaks.

Nikki Arnold-Strunck lost her son, Brendan Strunck, who overdosed when he was 24 years old. Nikki now shares her story in hopes of curbing the opioid epidemic in and around her community of Richmond, Kentucky.

On the morning of January 2, 2017 Nikki found the TV was left on overnight, the lights were on and her son was nowhere to be seen. She assumed Brendan had left with someone at some point in the night to go get high. But then she noticed the light was on under the bathroom door.

Nikki’s worst fear had come true. Brendan had overdosed in the bathroom sometime during the night.

Only eight days earlier, on Christmas Day, Brendan had been released from prison.

“He got out of jail on December 25, 2016,” Nikki said. “And I’m glad I got to spend that holiday with him because that’s the last one we spent together.”

Brendan planned to enter into a recovery center after the holidays.

“We sat on this couch three days before he died and I said to him, ‘Brendan you know if you don’t do something different you’re going to end up dead or in jail the rest of your life,” Nikki said. “And he said, ‘I know mom, I know that.”

Nikki refuses to allow Brendan’s death to be in vain. She spends her free time traveling to recovery centers, jails and schools to share her story.

Wherever she travels for her talks, she plays the recording of the 911 call from when she found Brendan overdosed.

“I’d love to say it’s been three years and that phone call doesn’t affect me but it does,” Nikki said. “It takes me back to being outside, in the yard, in the cold, with no coat on, it makes all those things come back very vividly.”

“I broke down. When you pick out a casket for your 24-year-old child, that’s not normal,” Nikki said. “It’s not what you’re supposed to do.”

The beginning of the end

Brendan had what would be considered a normal childhood. He played football, was a high-achieving student and was well liked by everyone. Still, Nikki was always scared he would fall into a life she knows all too well.

“I think for me, that was one of the biggest things I worried about when I was pregnant just because my dad was an addict and Brendan’s dad was an alcoholic,” Nikki said. “That was always my biggest fear, that if I had a child they would end up addicted.”

When Brendan was 13 years old, Nikki got a call from the middle school he attended in Richmond, Kentucky that her son had gotten into trouble. Expecting to pick him up from school, she was instead directed to collect him from jail. He had been caught with marijuana and charged with possession.

It was a prelude to Brendan’s battle with addiction. He would soon transition from using marijuana to using heroin.

Nikki tried to get ahead of the problem by moving to Cincinnati, away from the negative influences in Brendan’s life. Unknown to her at the time, she was moving Brendan to the sixth worst county in Kentucky for opioid use. The problem got worse. She decided to move back to Richmond.

The toll of addiction

Brendan overdosed five times during his struggle with addiction. “In 2015 he overdosed twice in a week,” Nikki recalled. “He overdosed on a Monday and on a Friday.”

Nikki also tried everything in her power to prevent Brendan from getting a felony, but at 18 years old, Brendan was arrested and charged with his first felony, again possession.

“At 24 he was tired of everything,” said Nikki. “It was a job to stay high at that point.”

From day one, Brendan’s struggle with addiction affected Nikki. “It really made me feel hopeless and really helpless as a mom,” said Nikki.

Three and a half years later, Nikki still lives in the same house where Brendan died. She says it’s been comforting.

“Especially when he first died and I was really early in my grief,” Nikki said. “Being able to go in that bathroom and sit where he was and just be able to grieve there in the last place he was, helped me a lot.”

Mental health has always been an obstacle in Nikki’s life. She has suffered from anxiety and depression her whole life and falling back into that hole has always been a potential risk. But through all her tribulations, she has developed healthy coping skills to help get her through.

On the front lines

In Louisville, Kentucky members of the fire department are accustomed to running daily overdose calls.

Firefighters in Louisville are no strangers to the opioid epidemic due to the city’s close proximity to Ohio, one of the hot spots of the epidemic. According to the National Institute on Drug Abuse, there were 989 opioid-related deaths in Kentucky alone in 2016.

According to Major Wes Gibson, a battalion chief with the LFD, the department’s personnel typically get to overdose calls first  meaning, they are the ones usually administering Narcan, an overdose reversing drug, before EMS arrives.

Captain Michael Quinn, who has been with the LFD for six years, said his station in the west of the city receives one or more overdose calls per day.

“Initially when we first started making them it was like wow, there’s overdoses all over the place,” Captain Quinn said. “But being in the fire department you become kind of immune to the shock factor so now when I hear those it’s like oh there’s another overdose because it has happened and continues to happen so often.”

According to LMES, there was a spike in overdose calls in May of 2018, with 275 non-fatal calls and six fatal ones.

Nikki will continue helping people by sharing Brendan’s story around Kentucky for as long as the opioid epidemic continues.

From 2016 to 2017 there was an 11 percent increase in opioid fatalities in Kentucky, according to the Centers for Disease Control and Prevention.

Many of those struggling with addiction start consuming drugs at a young age. Half of the teens who participated in a 2018 Pew Research Center survey said drug addiction is a major problem among their peers.

Brendan was one of them. He started using drugs in middle school. That’s why Nikki believes is important to tell her story to students.

One of the reasons Nikki said it is important to speak in schools is because Brendan began using drugs in middle school.

Half of the teens who participated in a 2018 Pew Research Center survey said drug addiction is a major problem among their peers.

Nikki shares her story because she wants people to know how their actions will have a negative effect on everyone around them, especially those closest to them.

When I moved to Kentucky, I was exposed to one of the states hit hardest by the opioid crisis. The epidemic is something I had wanted to document since moving to Kentucky, and while I knew the crisis has been heavily covered, my goal was to add another angle by focusing on the range of people affected. The crisis is a national problem that I wanted to be able to bring down to a smaller and more personal scale in order for people who are not immediately exposed to it to be able to see the reality of how it can affect anyone.

I met Nikki through another story I had worked on and she welcomed me into her life with open arms. Nikki is a huge advocate for addicts and their families. She devotes her life to helping those struggling with addiction all in the memory of her late son, Brendan. She travels around Kentucky and speaks frequently in the Richmond and Lexington areas at recovery centers, jails and schools. Because of this and the work she does, Nikki and I worked together to be able to possibly expand the scope of people who Brendan’s story could reach.

Almost every weekend for about four months, I traveled two-and-a-half hours into a different time zone to tell Nikki’s story. We bonded over our love for dogs, chocolate and good coffee while I soaked in the wonderful stories she shared with me about Brendan’s childhood. By the end of my time with Nikki, I felt like I had known Brendan too. While working on this story, I was close to the age Brendan was when he overdosed, which gave Nikki and me another level of connection.

I decided to add the first responders after looking at statistics and realizing just how many overdose calls the Louisville Fire Department runs on a daily basis. I thought to myself that having to see that everyday has to affect those first responders as well. It was also a way for me to seamlessly introduce statistics into the narrative.

Nikki wants people who are struggling from addiction and the families of those struggling to know that there is hope and there is someone out there who wants them to get better. I am forever grateful to Nikki for letting me into her life and allowing me to share Brendan and her story.