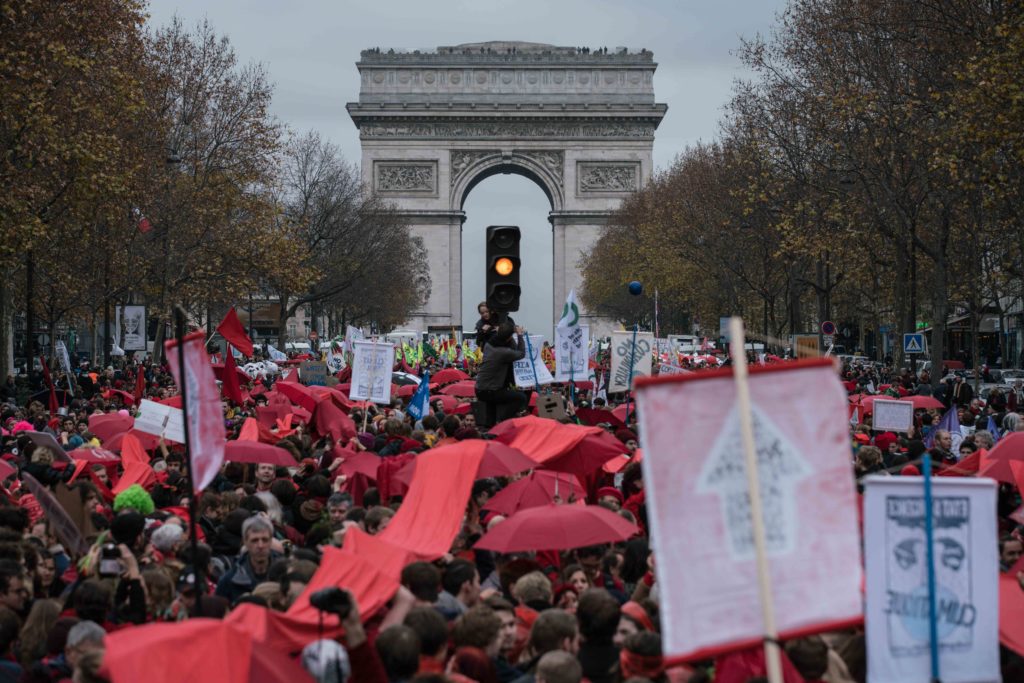 Eighteen months ago, in a converted airport hangar outside of Paris, representatives from 195 countries stood cheering after adopting an unprecedented international agreement to curb global warming.

The United States had played a leading role in brokering that deal but the palpable optimism for our planet, if not elation, hit a sour note the following year in Marrakesh as Donald J. Trump was elected U.S. president during the follow-up gathering to discuss implementation of the agreement.

On Thursday, fears that Trump would try to disrupt global efforts to combat climate change were realized as he made good on a campaign promise and announced that the U.S. would withdraw from the “draconian” and “unfair” accord and look to renegotiate a “better deal.”

It certainly has been a tumultuous time to report on environmental issues around the world. Starting with the historic global commitments made in Paris in late 2015, The GroundTruth Project has embarked on in-depth international reporting on the destructive impacts of climate change – and the real ways in which the Paris Agreement stands to address them.

The culmination of our reporting, Living Proof, brings together under one umbrella the surprising and very human fallouts of climate change in dramatically different places, from the Philippines to Somalia to the Arctic, and what’s at stake if we fail to address arguably the biggest crisis facing our generation.

Fierce storms in the island nation of the Philippines are contributing to human trafficking. Severe drought in Somalia is fueling conflict and extremism. And rising waters are threatening populous cities from Jakarta to New York. These are just a few of the stories we’ve been tracking.

Trump’s announcement, while expected, received widespread condemnation from prominent leaders across business, political and national lines – as well as those from the regions most vulnerable to climate change where we have been reporting.

“Today’s decision is disappointing & confusing for those that support US leadership,” tweeted Hilda Heine, president of the Republic of the Marshall Islands, a group of low-lying islands under threat from rising seas. Prime Minister of Canada Justin Trudeau called the move “disheartening” and former Ireland President Mary Robinson said it was “unconscionable.”

The Paris Agreement, which seeks to limit global warming to 2 degrees Celsius above pre-industrial levels and ensure a sustainable future for the planet, was preceded by decades of failed negotiations to tackle climate change in a way that was equitable to developed and developing countries alike. Under the Obama administration, the U.S. had targeted a 26 to 28 percent reduction in greenhouse gas emissions below 2005 levels by 2025.

“This will be a foolish and destructive move that will be damaging both to the USA and to the world,” Robert Stavins, a professor at Harvard University, and director of the Harvard Project on Climate Agreements at the Belfer Center, said in email. “Far from being a ‘bad deal’ for the United States, the Paris Agreement is the answer to US prayers… calling for an agreement that includes not only industrialized countries but the large emerging economies as well.”

“Trump’s decision sends a clear and frankly completely unequivocal signal that he does not care about the people of other countries,” said Nathan Hultman, Director of the Center for Global Sustainability at the University of Maryland. “The other countries who have highly vulnerable populations understand that Donald Trump’s America does not care about them – except on the chance that they can in some way provide some utilitarian benefit. This is not leadership, it is crass transactionalism, and the world is not blind to it.”

The U.S. will now walk through a four-year process to leave the agreement, joining Nicaragua and Syria as the only countries not party to it.

While the decision to exit is troubling to some experts and those on the frontlines of climate change, some see a silver lining – that an absence of U.S. leadership on climate could invigorate other efforts to curb emissions and catalyze new ways of problem-solving.

“Americans may not realize how important climate change is to most countries around the world, the threat to their livelihood and the livelihood of their people,” said Hultman, referring to the international repercussions of a U.S. exit, adding that there was always the concern that if you had a player like the U.S. pullout of the accord, it could water down the ambition or commitments of other countries and that this would have an impact on global emissions targets.

But, Hultman noted, it also creates an opening for other players and countries like China, the world’s leading carbon polluter, to assume leadership on climate change.

In our reporting, we’ve seen the increasing role that cities and business are playing in accelerating climate mitigation and adaptation. We’ve seen how local activists are pushing their governments to see the importance of environmental stability to ensuring political stability. And we’ve seen a number of pro-environment developments take root outside of formal channels, too. Despite Trump’s announcement, more Americans than ever are concerned about climate change.

“If the United States wants to leave, it’s better to leave than undermine the pact from within,” says Maria Ivanova, an associate professor at UMB and a visiting fellow at the Climate CoLab at MIT.

Ivanova welcomes the U.S. exit. It’s not a viewpoint that sits easily with her, but she has come to believe that it’s better for the U.S. to leave and allow others who want to make it work take over.

She also thinks the immediate consequence of Trump’s anti-environment stance is already being felt, citing the fact that the United Nations and developing countries are already bracing for funding cuts in foreign assistance that would address climate change.

“He is ceding the leadership position of the United States on the world stage and not just on environmental issues,” she said, referring specifically to China.

The response of many global leaders to uphold the Paris Agreement give hope that it will endure. Ivanova, for one, recalls that the US did not ratify the 1997 Kyoto Protocol and yet it still survived.

“The institution of climate governance will be OK. The actors will be impacted, some will have to take more on, but the United States’ reputation is just tremendously blemished. Whoever comes after will have to work harder to restore the standing of the United States in the world,” she said.