Learning online without a home: How families devastated by Oregon’s fires are trying to keep up with school 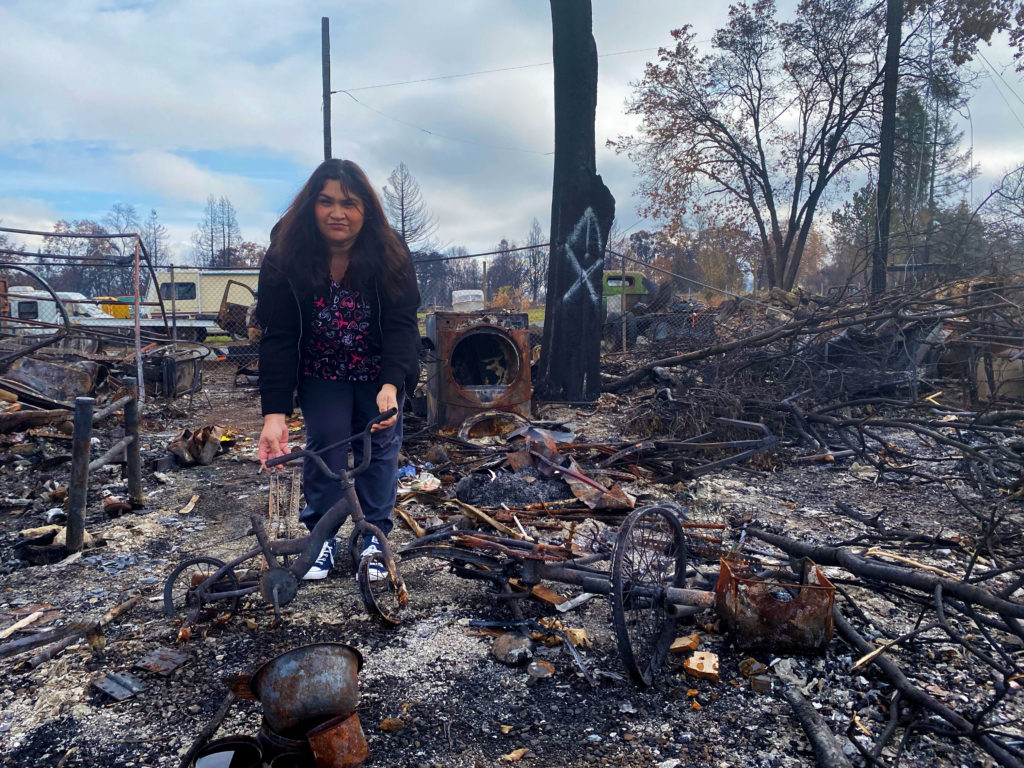 Elda Medina stands by her daughter Alesandra's bike amid the ruins of their home in Medford, Ore, which burned down during the wildfires fires that blazed across the West Coast last year. (Photo by Megan Botel/GroundTruth)

MEDFORD, Ore. – By Sept. 8, the day Elda Medina, 33, was supposed to go to her daughter’s elementary school to pick up supplies for a semester of distance learning, temperatures had been hovering above 100 degrees for weeks in southern Oregon.

Soon after Medina got to work — she’s a medical assistant in Medford, Ore. — she got an email from the school. The pickup had been postponed because of strong wind and thick smoke warnings.

Then, news of a fast-moving wildfire raging through southern Oregon broke, and her 11-year-old daughter called: A local sheriff was outside their trailer at San Rogue Mobile Park with a megaphone, ordering them to evacuate.

Several agonizing hours later, Medina was tracking the news at her sister’s house 20 miles north, and police footage surfaced showing some of the fire’s destruction. She was certain her house had burned.

“I cried, I screamed,” Medina said, shuddering at the memory. “Everywhere you looked was fire. It was a circle of fire here in the valley.”

Over the next several weeks, the single mother attempted to pick up the pieces of her family’s life — finding a new place to live, applying for any sort of financial assistance without having renter’s insurance, getting herself back to work so she could put food on the table for her young daughters, Camila, 11, and Alessandra, 3.

And, in the pandemic, Medina also had to figure out how her older daughter would continue to learn online.

“As a single, working mother, trying to get my daughter to do school work was already very, very hard,” she said. “After the fire, so much else was going on, it just was not a priority.”

More than 30% of families within the Phoenix-Talent school district lost their homes on Sept. 8 in the Almeda Fire, one of the most destructive fires in Oregon’s history. It destroyed more than 2,800 structures in Medford, Ashland, Talent and Phoenix, all cities within working-class Jackson County, just north of the California border.

With school closures due to the pandemic, families were left scrambling to continue distance learning for their kids amid the chaos. Many of the 700 students’ families who lost their homes are Latino immigrants living in multigenerational households and face the added challenge of language hurdles. For single, working mothers like Medina, the compounded impact of the fire’s toll and the pandemic has been “excruciating.”

“The fire disproportionately impacted our most vulnerable population,” said Brent Barry, Phoenix-Talent Schools superintendent. “When you have that many students who are immediately classified as homeless overnight, it is very, very difficult.”

Barry took on the de facto role as the school district’s disaster relief coordinator. His priority was to secure transitional housing for the district’s most vulnerable families, so he partnered with the nonprofit Rogue Retreat to gift donated trailers and RVs to people who had lost their homes. The district also established a Latino outreach program to ensure the families within the community’s large Spanish-speaking population were identified and supplied with replacement laptops after the blaze, he said.

But the outreach and support couldn’t guarantee student engagement — an inevitable issue amid so much chaos, and with the district’s fall semester being 100% online.

“People are in transition, moving from house to house,” Barry said. “And because of the pandemic mixed with fire losses, many high school students have had to take on jobs to support their families. They can’t be fully engaged in school anymore.”

Even for students not dealing with the loss of their home, distance learning has proved to be challenging nationwide. With first-semester grades now in, school districts around the country report the number of students failing classes has risen significantly. The Medford school district reported a 20% increase in classes failed compared to last year, a curriculum director at Three Rivers School District told a local news outlet; nearby Klamath Falls school district went from 7% to 40%. English language learners and students with disabilities are the most impacted, according to a report by Fairfax County school district in Virginia.

Since school went online in March, Camila had to guide herself through her fifth grade online courses while Medina was at work, in person, for nine hours a day. (Medina’s younger daughter, meanwhile, would stay with her babysitter.) For Camila, who is part of the Individualized Education Program (IEP) and struggles with an anxiety disorder, distance learning without any supervision or specialized support was already difficult. But for an anxious child, engaging in schoolwork was nearly impossible after the trauma of the fire.

“My daughter is very stubborn and very hardheaded,” Medina said. “I would get messages from the teacher all day that she wasn’t online, she wasn’t putting her video on. I can’t stay on top of that while at work.”

After the fire, Medina eventually received financial assistance from the Federal Emergency Management Agency (FEMA), which allowed her to cover some of the costs of replacing essential items and rent a two-bedroom apartment in Eagle Point, nearly 20 miles north of their old neighborhood. Camila also joined a state-funded day care, which allowed her to do distance learning with five other kids while being monitored by the day-care provider.

Still, Medina worries about her daughter’s waning education. She said she doesn’t believe one supervisor is able to monitor six children — all in different grades with varying schedules — especially with Camila’s particular needs.

“She needs extra help and services,” Medina said. “Kids with disabilities are not getting the help that they need at home.”

Although a comprehensive student performance report on the effect of natural disasters compounded with the pandemic has yet to be published, the strain is glaring within southern Oregon.

Since her mobile home burned in the Almeda Fire, Cesi Torres, 42, and her family of five have been living in a loaned, one-room RV parked on a friend’s plot of land. Shortly after the fire, her children’s charter school — Kids Unlimited, located in Medford — offered to allow socially distanced in-person instruction for students of families who lost their homes.

But Torres is torn. While in-person instruction offers some sense of normalcy for students dealing with the trauma of the fire, it has forced her to choose between her children’s education and mental well-being and the growing risk of infection of the virus, which has hit Latino communities, along with other minority groups, particularly hard.

With their cramped quarters, Torres knows her children are better off at school, though she remains anxious.

“Emotionally this has devastated them, being in school has helped them quite a bit,” Torres said in Spanish. “But as the pandemic keeps getting worse, I’m very nervous about this added risk.”

Torres and her family also received a FEMA grant to help with relocation costs, but with the surging costs of rent since the fire, they haven’t been able to find a permanent home that is within the ballpark of their old rent. Torres said they will remain in the RV until the housing market settles.

Barry, the superintendent, said that while he is heartened by the community’s response to this disaster, he has a real fear about the fire’s lasting impact on local culture, which has long been a haven for working-class, immigrant families. After the fire displaced so many, rent prices quickly shot up as people scrambled to find new homes.

“If our communities don’t prioritize rebuilding low-income housing, our community’s rich and diverse and valued demographic is going to drastically change,” he said.

There have been some bright spots: Barry and his team partnered with the local Boys and Girls Club to provide low or no-cost child care for those impacted, as well as free tele-counseling services. And through the school district’s fire relief fund, they have so far distributed more than $1 million to families who lost their homes.

“We can’t put these affordable housing places up overnight, but we really want to share with these families that there is hope and there is going to be a time when you can start over in the community you reside in,” he said.

As for Medina, she and her daughters are settling into their new normal: Each morning, she wakes the girls up extra early to make up for the added commute. She drives the 30 minutes to their old neighborhood to drop Camila off at her day care for home schooling and Alessandra at her babysitter. Then Medina is off to work.

“We’re very blessed, we love our new house. Camila loves having her own space,” she said. “We’re next to the mountain and surrounded by trees.”

She feels lucky to have settled in Eagle Point, but misses her old life: her community, the neighborhood dogs, the familiarity of her mailman.

And with the increasingly destructive fire seasons Oregon now faces, Medina knows another life-altering fire is a looming possibility. This time, though, she will be prepared: She purchased renter’s insurance for their new apartment, and even has an emergency luggage bag packed by the front door. Still, there is no true guarantee.

“This is the first time in my life ever going through something like this,” Medina said. “Material stuff comes and goes, your life is just not replaceable.”

And as for her daughter readjusting to online schooling? “She’ll soon be okay,” she said.

Megan Botel is a Poynter-Koch Media and Journalism Fellow at The GroundTruth Project. 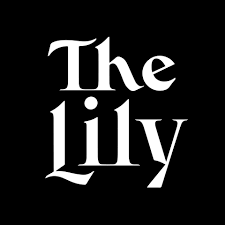 A version of this story appeared on THE LILY on January 6, 2021