Lavish weddings are back, but vendors are struggling with costs, labor shortages—and tracking down tents 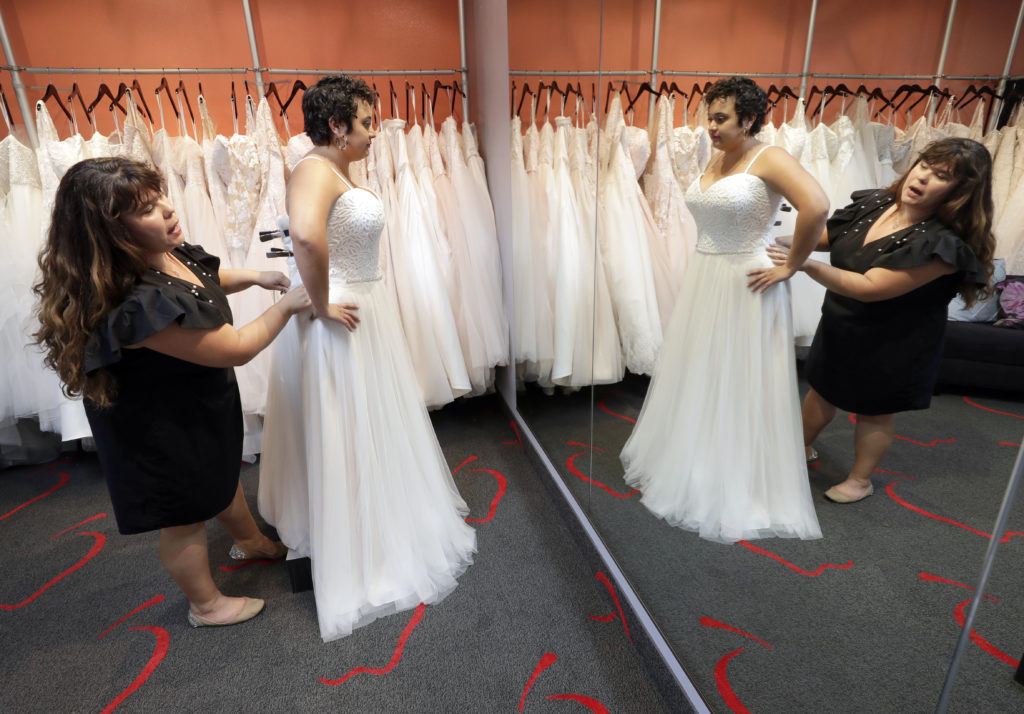 The Delta Variant, as well as supply chain issues and even changes in weather patterns have put greater stress on the wedding industry, as it tries to return to normalcy. (Photo by Matt York/Associated Press)

Matt Rowland has been planning events on the North Coast of California for almost 40 years. But the COVID labor shortage in his industry and area have led to some unexpected hires of late. “Guys who have grown up in a lifestyle of harvesting natural resources, which are depleting like lumber and fish and crabs — those guys are trying to switch over to another industry,” Rowland said. “And they’re actually pretty good at the kind of stuff we do. Tents are like boats in terms of knots and tying and rigging, they’re very similar.”

Rowland lost several longtime employees to career changes and relocation since COVID-19 hit last March. The pool of labor to replace the people with years of wedding planning experience is made up mostly of the young and unskilled, Rowland said. They’re more used to doing “guy stuff” like working with chainsaws rather than draperies. “It’s not easy trying to teach these guys how to do weddings,” Rowland said. “Some of the guys that we have working are really, really having to reinvent themselves to do good work here.”

The staffing challenges are just one of the bizarre new economic realities playing out in this picturesque community on the California coast. Add supply chain woes, price increases—and yes, even climate change—and the wedding business in Mendocino County is a microcosm for the havoc most industries are experiencing right now.

Stressful in a good year

One thing is clear: After almost two years of postponements, couples aren’t willing to wait to have their special days anymore. “Wedding planning is a stressful profession in a good year,” said wedding and event planner Zoe Braga, “and it’s been crazy with the condensing of two year’s worth of weddings into one.”

The coast, a little over three hours north of San Francisco, has been seeing five to 10 destination weddings per weekend, bringing in anywhere from 50 to 150 people from May to October for the past few years, according to wedding planners. There are fewer open venues—some, like the MacCallum House, opted not to host weddings again because of COVID-19—and other venues refused to issue refunds, instead giving couples an open date to reschedule. “So we’ve had a lot more Tuesday afternoon weddings,” Rowland said. “That’s a real pain in the butt, too, because there’s no real down time.”

Between fully booked venues, staff shortages, supply chain backups and worries about COVID, things are stressful. “We get what I would call an unhealthy amount of work coming our way, like, I can’t get my phone to stop ringing,” says Rowland.

One more factor? The weather. Mendocino traditionally hasn’t been a huge wedding destination, but with Napa and Sonoma limiting the number of events and raising already high prices, business has trickled out to the coast. Planners here say the climate has become more unpredictable during recent years and it has started raining, unusually, in September, which Rowland said tends to be a healthy month for weddings.

The rain combined with the resurgence in the Delta variant has created a shortage in the supply of tents, for which Rowland is practically the only supplier on the coast. Right now all of those tents—that are typically available for the wedding season—are being used by restaurants, hospitals and schools. It would take seven to eight months to get a tent from another supplier.

“We’re kind of the only game in town,” Rowland said. “There are lots of other places you can go out of the area, but you can’t get them last minute. You have to order them weeks in advance.”

Julia Conway, owner of catering company Assaggiare Mendocino, said the supply chain on the Mendocino Coast “has always been a little nuts,” but she’s managed to deal with those issues by spreading her orders among big distributors and local providers over more than two decades.

“I can scramble enough to get it done,” Conway said, “It just may mean I end up paying $3 a pound more for short ribs than I would have if I were able to buy them through my broadline distributor.”

Some of those vendors, like Rosa Wyglendowski, owner of L&R Farm and the go-to wedding florist in the area for almost four decades, decided to retire after the pandemic hit.

Other vendors report that for the most part they signed pre-pandemic contracts with their customers that lock in prices, but are now getting squeezed by post-pandemic cost increases that their clients don’t want to hear about. “They just want to have their events in the way that they thought they were going to have them when they first booked them,” Conway said.

But price increases aren’t unheard of in the wedding industry, especially when you’re planning something a year in advance, Rowland said. Since the pandemic hit, he tries not to price things and instead asks for a retainer to be put on his calendar with the expectation they’ll check in as the date approaches.

“There were some issues with that, like I didn’t have as much liquid capital,” Rowland said, “but I have far fewer of those sorts of problems.”

Conway added she has also fared better than her colleagues and competitors because her contracts state she can renegotiate the menu or prices if overall costs increase 15% or more.

“But photographers, DJs, cake bakers, wedding coordinators and other people who don’t have this type of contract infrastructure in place are pretty much stuck,” Conway said.

While the increased demand has presented challenges, Travis Scott, executive director of the Mendocino County Tourism Commission, said destination weddings “put heads in beds,” generating millions in county revenue through both the sales tax and transient occupancy tax, also known as the bed tax, which is collected when visitors stay overnight in county lodging facilities.

Conway said it’s also created opportunities for collaboration locally and across the state. Regulations didn’t come easy for the wedding industry, which didn’t have its own lobbying association before the pandemic, she said, though she helped form the California Events Coalition that is now working with the state on regulations.

“Who used to be your competitor is now your colleague,” Conway said. “So we’re really exploring new ways of collaborating and I find that very refreshing.”

A version of this story appeared on FORTUNE on October 23, 2021