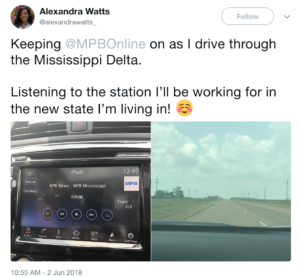 As a Report for America corps member, Alexandra joined MPB to cover the Delta region in the nation’s poorest state. Back in 1967, Martin Luther King Jr. chose the Delta to be the launch site of his Poor People’s Campaign. More than 50 years later, the region still remains a microcosm of institutional neglect — of raw racial, economic fissures tearing our national fabric apart.

Alexandra’s decision to leave her home state of Arizona, where she was a 2017 Next Generation Radio Fellow with NPR, was partially a result of asking herself an age-old question.

“I asked myself…how can I be of best service?” Alexandra said, reflecting on why she applied to join Report for America.

“I really love the 1960s,” she said. “I can’t sit back and not do anything. But while I’m not out in the streets or writing protest songs, reporting is how I can give back.”

Report for America is a new GroundTruth initiative to help restore local journalism across the United States of America. Ultimately, the crisis in journalism has become a crisis for our democracy. And we’re calling on a new generation of journalists to serve in community news organizations across the country.

So far, more than 740 journalists answered our call. Ten were selected, in addition to three existing corps members who have been reporting across Appalachia for the last few months as part of our pilot program.

In his second week on the job, Will Wright, one of our first three corps members who is working at the Lexington Herald-Leader, reported on parts of Eastern Kentucky that had gone without running water for weeks.

“You turn it on and it smells like bleach,” he wrote.

One month later, the head of the water district was forced into retirement.

One month after that, the state “found” $5 million to help fix the water system.

Our ten new corps members are poised to report and effect the same level of change in their host newsrooms. Within five years, we hope to place 1,000 journalists in local newsrooms across the country.

For some of our corps members, their newsroom placements are a return to their hometown and for some, it’s a place they never left.

For 26-year-old Obed Manuel who was named “Dallas taco expert” by Eater, the concept of home has always been complicated.

He crossed the border from Mexico with his parents when he was four years old, but Dallas is his hometown.

“The election in 2016 was personal. My reporting in my community is about representing my family, my people, my barrio,” he said.

At the Dallas Morning News, he’ll report on the population of second-generation Hispanic immigrants and the issues they face.

Education and healthcare, he says, are two of the most pressing challenges. For instance, the second-generation has a lower life-expectancy than the first generation. In terms of education, schools are facing budget cuts and Hispanics lag in university retention rates.

“I’ve got to figure this out,” he says, while looking through statistics on his phone.

Alexandra Watts will be joined in Mississippi by two other corps members: Michelle Liu, a 22-year-old native of Texas, and 32-year-old Eric Shelton, who will be the first photojournalist at Mississippi Today.

“People have this idea my state is this horrible place,” says Mississippi native Shelton. His first photo story on a community development financial institution took him to the small town of Utica, 35 miles away from the capital. There, the nearest grocery store where residents can purchase healthy food is nearly 19 miles away. The local Sunflower grocery store closed in 2014.

“Mississippi has its problems just like every other place, but we need to remember everyone has a story,” Shelton said. “Everyone has a voice. Sometimes they just need help getting their voices amplified.”