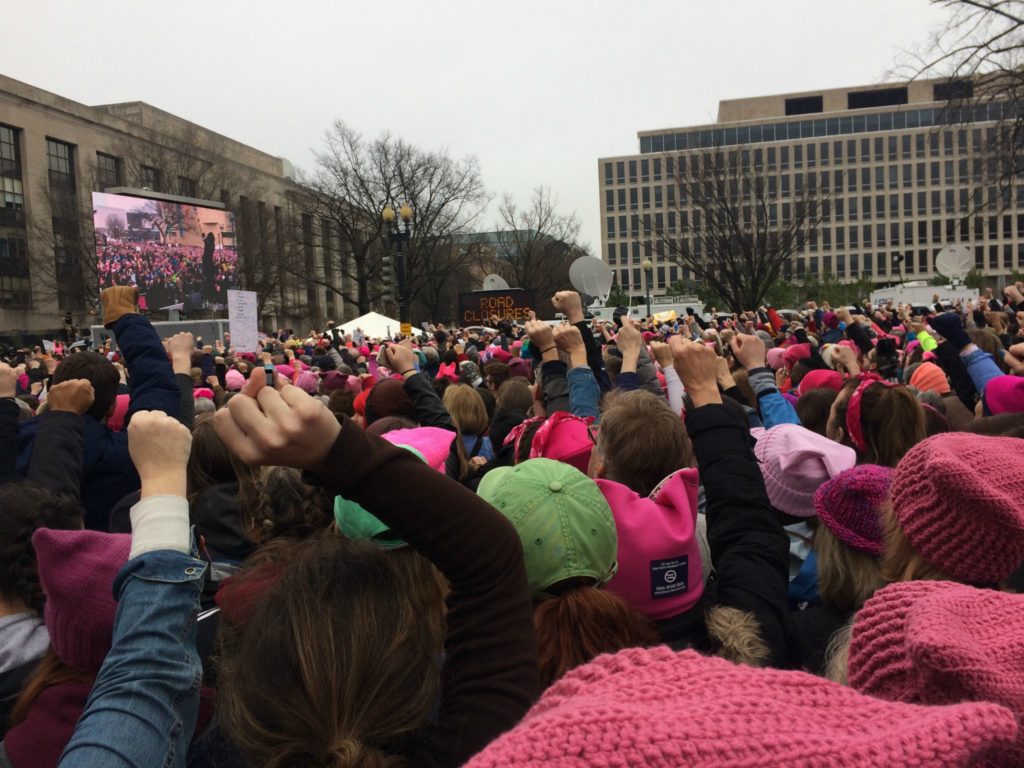 Protesters gather in the Women's March on Washington, D.C. (Photo by Giulia Afiune/GroundTruth)

They wore hand-painted cardboard butterfly wings on their backs as symbols of migration, with words like “peace,” “warrior” and “hermana” (sister) written in bright colors. Madai Ledezma and her 8-year-old daughter, Heather, stood in solidarity with a small group of Latinos that gathered in Garfield Park at Washington D.C. last Saturday. They were there to send a message: Latinas need to be heard, especially with the contentious transfer of power to President Donald Trump.

“I’m worried about my daughter’s situation if there is a deportation. I don’t know what Trump will do,” said the mother, an immigrant from Mexico, as she held hands with her daughter, an american citizen. “I’m teaching her to fight for the rights of those who don’t have voice or vote. We are fighting for equality between human beings. There shouldn’t be any race or walls that divide us.”

Ledezma was one of many Latina voices present in what Gloria Steinem called an “ocean” of protesters who joined the Women’s March on Washington, D.C. on Jan. 21. Besides defending gender equality and women’s rights, they also called for immigrants’ rights to vote, study, gain citizenship and be paid equally. Many also took issue with Trump’s promise to deport up to 3 million undocumented immigrants and his criticism of policies like DACA and DAPA, which protect undocumented youth and parents of American residents from deportation.

Into a megaphone, 24-year-old Fatima Coreas hollered slogans that were echoed by the group of Latinos strolling from Garfield Park to Independence Avenue, where the March was held. Coreas works as an education organizer at Casa de Maryland, one of the organizations that helped set up the meeting of Latinos before the Women’s March.

“After what the new president said, our families are afraid of being deported and separated from their kids, who are U.S. citizens,” said Coreas, who was born in El Salvador and came to the United States when she was 10. “I’m marching on behalf of my Latina moms out there who might not be able to be present here. I’m marching for their rights, for their dignity and also for keeping families together.”

Initially, the Women’s March on Washington was criticized for being organized only by white women, and for appropriating the name of a protest led by African-American women in 1997. The organizers later invited leaders from different backgrounds to join, but even so, some protesters felt that there weren’t enough Latinas in the March.

“I’m sorry to say this, but this is a very white group of people. There’s nothing wrong with that, but where are my minorities? Do they belong in America? Do they belong in this group?” asked Rocio Masset, a 45-year-old lawyer originally from Mexico. Masset lived in the U.S. for eight years, but rushed for citizenship and the right to vote when Trump was officially nominated by the GOP.

Aside from feeling unwelcome, Masset believes that the demand to work excluded many from marching that day.

“They are not here because they are cleaning people’s houses or cleaning dishes, or watching their kids while their husbands work 12 hours a day,” she said. “Also, I think no one realizes that Trump has installed in the Latino community the feeling of fear – of shame of being here and wanting a better life. I’m not afraid of coming because I’m a citizen.”

Though there are no official numbers on the ethnicity of attendees, it was clear that white women were the majority in the crowd of an estimated 500,000 protesters. On-stage, however, women of color were also giving speeches. Two highlights were Sophie Cruz, a 6-year-old Mexican-American activist, and actress America Ferrera, who was the chair of the Artists’ Table of the Women’s March (a group of artists committed to the principles of the movement). While Cruz urged people to fight against the destruction of families, Ferrera defended DACA.

Trump’s immediate take on DACA is unknown. In an interview at Fox News, his Chief of Staff said that the new administration would seek a long-term solution on the issue, but also stated that the President might sign executive orders on immigration starting this week.

Feeling that Latinas weren’t “part of the conversation,” 26-year-old Jennifer Solorio was reluctant to march at first. She ultimately decided to come in order to represent her family of Mexican immigrants.

“You gotta show up. My parents were immigrants. They have lived here for a long time and are now citizens. I’m here marching for them and their struggle – and they would never have the privilege of taking a day off and coming to the March,” Solorio said. “So, being able to use my privilege to partake in the march is important.”

Solorio and her friend, Yadira Sanchez, 25, were handing out T-shirts stamped with “Mi Familia Vota,” an organization that vies for civic engagement among immigrants.

“Latino families usually come from countries that are corrupt politically, so they don’t want to engage in voting. But how are we going to get representation and accountability with our leaders otherwise?” she asked.

With an unknown future ahead, Latinos vocalized their only certainty in the form of a slogan, chanted throughout the March: “Aqui estamos y no nos vamos” (Here we are, and we’re not leaving).