ON THE GROUND ON THE ONEIDA NATION

Land is life: The Oneida Nation reclaims its identity 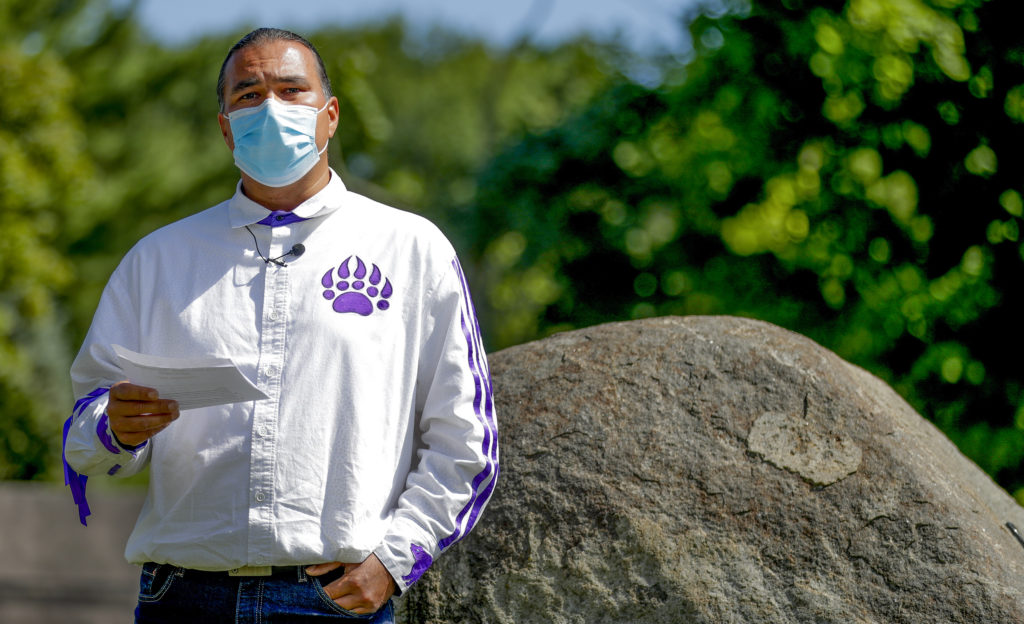 Oneida Nation Chairman Tehassi Hill makes a statement about the tribe’s appeals court victory on Thursday, July 30, 2020, at Veteran’s Memorial in Oneida, Wisconsin. The Nation disputed the village of Hobart’s requirement for a festival permit, saying it was a challenge to tribal sovereignty. (Photo by Ebony Cox/USA TODAY NETWORK-Wisconsin)

ONEIDA NATION, Wis. – For many American Indians, land is more than just a commodity or resource to be sold. Land is life. A recent history of Native Americans benefiting greatly from reclaiming much of their land to help fund tribal services, such as health and education, has ingrained that wisdom into elders like Bobbi Webster, a tribal member of the Oneida Nation.

Webster, 67, readily recalls seeing as a child the Oneida people working in the fields. She remembers the long, hard hours they spent reaching to pick apples on their reservation for little pay.

“This area was all apple orchards that Indians worked on,” said Webster, who is also the public relations officer for Oneida Nation. “I think they paid workers 50 cents a pail for picking apples.”

The Oneida people were originally from New York, but the Nation was established across 65,000 acres in northeast Wisconsin in 1838 after the Second Treaty of Buffalo Creek, also known as the Treaty with the New York Indians, was signed by the Oneida and the U.S. government. The United States paid $6,000 to secure the land at Green Bay, where the tribe would “remove to their new homes in the Indian territory.”

Today, the reservation is mostly a rural area with patches of farms, rolling hills and small residential neighborhoods, as well as a few historic buildings.

The Oneida Nation is one of the 11 federally recognized tribes in Wisconsin, one of the few tribes to generally ally with the Americans during the Revolutionary War against the British. In return, through the 1794 Treaty of Canandaigua, the federal government promised to protect the Oneida lands in upstate New York and prohibited the sale of their land without the federal government’s approval.

But the state of New York purchased Oneida land despite the federal government and the Oneida were left with only 32 acres by 1846, prompting many to forcibly relocate to Wisconsin throughout the 1800s.

It was a legacy of movement that would follow the Oneida people for generations. Webster remembers her own family’s many movements in the 1950s, before her father was able to buy their ancestral home on the reservation in the early 1960s.

He served as the Nation’s chairman for 23 years and often met with the council about leasing what little land the tribe had at the time, a forward-thinking approach to preserving the tribe’s heritage and land at a time when many Oneida in previous years, not privy to federal property tax law, failed to pay property taxes, causing the loss of their property through tax lien.

Finally, in 1988, Congress passed the Indian Gaming Regulatory Act, which created protections for tribes seeking to build and operate casinos as a means of revenue. Through gaming and other enterprises, such as banking and commercial leasing, the Oneida Nation reported $409 million in revenue in 2015, with more than $100 million in gaming compact fees paid to the state of Wisconsin since 1994.

With the new money, the Nation began aggressively buying back its land in the 1990s, eventually recovering about two-thirds of its original 65,000 acres.

“That’s an effort to never lose the land again,” Webster said. “As we recover the land, we don’t sell.”

Heading into the reservation from the west side of Green Bay, visitors first pass through an unofficial gateway under Interstate 41, a giant mural depicting the three clans of the Oneida, the Turtle, the Wolf and the Bear. Webster takes care to point it out, her sense of pride palpable. It’s the first indication on the reservation that the Nation’s identity is being restored in the land.

Much of the Oneida’s reacquired land encompasses Green Bay’s west side, and includes an industrial park where retailers, non-Indigenous agricultural and commercial tenants such as Wal-Mart and Sam’s Club, would eventually lease from the tribe. The tribe’s priority is to care for the land they have reclaimed, so companies must abide by the Nation’s strict environmental policies.

Farmers, for example, cannot use certain chemicals otherwise common throughout the state, and though Webster noted that some tenants had grumbled, they continue to adhere to the Nation’s laws.

“That’s when I began to realize the Oneida Nation needed land to sustain ourselves,” Webster said. “That’s enabled us to restore our environment, build homes and an economy and sustain our people.”

Candidates in the last tribal election talked about the need for even more commercial leasing as a way to diversify the tribe’s revenue and decrease dependence on gaming, especially after three casinos had to shut down at the height of the pandemic.

Revenue requires land and the Oneida believe they have fought for their right to it.

“Having land is part of our sovereignty,” Webster said.

That sovereignty was most recently upheld in July by The U.S. Court of Appeals for the Seventh Circuit. The case was established in 2016, when the village of Hobart, located within the original Oneida reservation, sought to impose ordinances on the tribe, issuing a citation to the Oneida Nation for failing to apply for a permit to hold its annual Big Apple Fest on tribally-owned land. Hobart officials sought to regulate noise, dust, light and other aspects of the event.

The village, according to court records, argued that the 1887 Dawes Act, a law that allows the President to break up reservation land into allotments, meant the reservation was technically in pieces and the tribe must abide by local regulation.

A federal judge in Green Bay agreed with Hobart, stating that the tribe is no longer exempt from local ordinances on land it owns within the village. But on appeal, Circuit Court Judge David Hamilton sided with the Oneida Nation, ruling that the 65,000-acre reservation still stands because Congress never acted to dissolve it. Significantly, his argument claimed the district court failed to consider the entire history of events, including the 1934 Indian Reorganization Act, which attempted to reverse the allotment acts in order to stem the loss of tribal lands.

“The results of the allotment policy were disastrous for Indians,” Hamilton wrote in his decision, “although the policy was driven at least in part by a paternalistic but misguided belief that forced assimilation and individual land ownership would benefit them.”

The decision aligns with recent efforts to protect tribal land rights, as with the landmark Supreme Court case decision in July declaring that much of eastern Oklahoma is an Indian reservation.

“We’re a government, not a race, and we’re represented through treaty with the federal government,” said Oneida Nation Chairman Tehassi Hill during a press conference after the ruling.

The appeals court decision potentially opens opportunities for developing housing for tribal members in Hobart without being subject to building permits by the village. The Nation has its own laws to ensure property is safe and maintained, and it intends to implement them.

The Oneida feel they are newly free to practice their ways on their own land without outside interference, and some of the old ways are seeing a resurgence. Ceremonial celebrations are being held, and traditional burials are being restored, including the tradition of each clan taking on certain ceremonial responsibilities, such as performing chores for a grieving family. A cemetery was recently created for traditional burials, which can include funeral fires that burn for 10 days.

This summer, the Oneida practiced that most American of traditions: campaigning. Hundreds of signs decorated lawns as the Nation held its tribal government elections, showing its citizens’ pride in their independent election process.

A referendum on the ballot asked voters if they would support a widespread Oneida language initiative, so that the tribe’s more than 17,000 members can have the opportunity to relearn the language of their ancestors.

Frank Vaisvilas covers Native American issues in Wisconsin for the Green Bay Press-Gazette. This dispatch is part of a series called “On the Ground” with Report for America, an initiative of The GroundTruth Project. Follow him on Twitter: @vaisvilas_frank