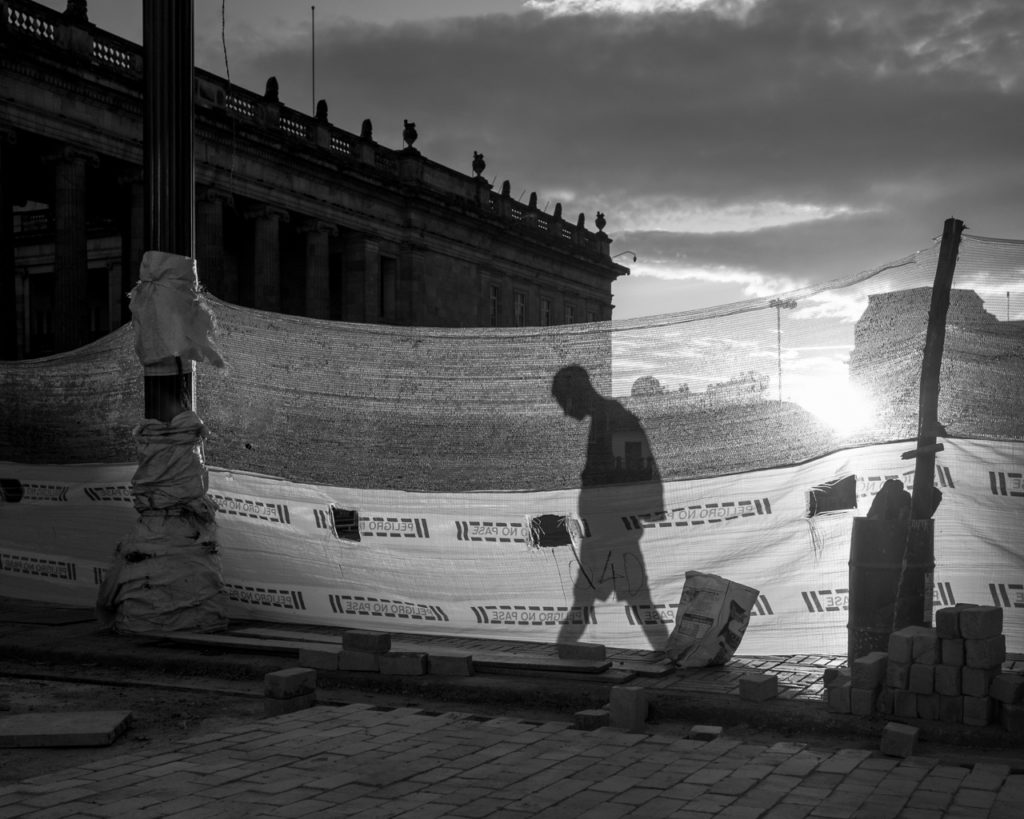 A man walks behind a construction barrier in the Plaza de Bolivar. In the background, the Colombian Congress Building. July 25, 2015. (Juan Cristóbal Cobo/The GroundTruth Project)

I started working on La Carrera Séptima two and a half years ago. I think I will always go back, and I might never stop working on it. For me this place — the main and most historical street in Bogotá, Colombia — embodies everything about street photography with a purpose. It is a place where I need to be alert, it is a place that keeps me on the edge, and it is a place that drives my curiosity about the human condition and the history of the city and this country.

I try to never engage with my subjects before taking a photo. When I do, the results are not the same, but having said that, I do talk to people sometimes after a take a picture, and when I’m working the same place over and over, I like to bring prints and offer them to the subjects I’ve photographed. It’s always one of the most rewarding experiences. I value spontaneity in a photo, and I think it can be achieved by having no contact, or the opposite — by staying with the subject for a very long time.

I get attracted by characters, by the light and by places. One of the people I’ve photographed in La Séptima has stayed in my mind, and I often think about him. It’s the young kid who impersonates Michael Jackson. When I made that picture, he was dancing and performing with such intensity. I entered the circle of people watching him and started shooting. I had a flash that time, and my presence there was obvious. I think he started to perform for the camera. After a few shots, I went on with my walk, and we didn’t say anything to each other. A few days later I came back with some prints and gave them to him. He was very excited, and he told me he was 14 and that he came from the Urabá region of Colombia, probably escaping the armed conflict. After that, every time I walked by his show, he would ask me to take some more pictures. I usually obliged, but I never got the same result as the first time.

A picture that seems to always cause a reaction is “The Rat Vendor.” This man makes a living by selling  fake rats that he manufactures himself. He plays with them, and makes people jump with fear once in a while. Most people that see the picture and a lot of passersby think the rats are real. To me this represents a bit of the surrealism of this place.

A photo I’m fond of is “Stray Dogs.” I noticed a homeless man walking, and behind him a trail of six dogs, all black, all menacing. I started to follow them at a distance, and made a few shots. But I wasn’t happy trailing them, so I decided to walk faster and wait at a spot that I thought could add to the story. I stopped in front of the building with the open front door, and waited. The homeless man walked by, but still, no interesting picture for me until the end, when the last two dogs stopped to drink out of a puddle. That’s when I made the photo that finally satisfied my wishes to create something a bit wild, a bit scary, kind of apocalyptic — in many senses the spirit of La Carrera Séptima.

I was born in Cali, Colombia, and moved to New York as a teenager. My earliest passions were centered on filmmaking, but after 30 years as a cinematographer and commercial director, I found myself being strongly drawn to the art of still photography.

I have been trying to tell stories for most of my life. Filmmaking was the medium that allowed me to do that, first as a cinematographer behind the camera in many films and documentaries, and then as a director in the world of advertising, where stories needed to be told and understood in concise blocks of time. The compromise with advertising is that you lose touch with telling your own stories. So three years ago I made a blind leap into the unknown, from moving images and into still photography.

I went from collaborative filmmaking to a solitary art form that purely reflected my own personal interpretation of the world, people and events around me. It’s a much lonelier process, where I follow only my intuition without outside guidance. I know how to tell stories in film, but I find the photographic medium much more complex, where a single image can have the power to inform you, move you and perhaps, in the best of cases, remain like an imprint in your mind.

I never went to a photo or journalism school. I am teaching myself how to do it. Of course, I bring my knowledge of many years to the still image, my understanding of light and composition, for example, and the passion for the story. I have a deep curiosity about the people around me, I’m curious also about myself — my own emotions — and I try to connect those with my pictures.