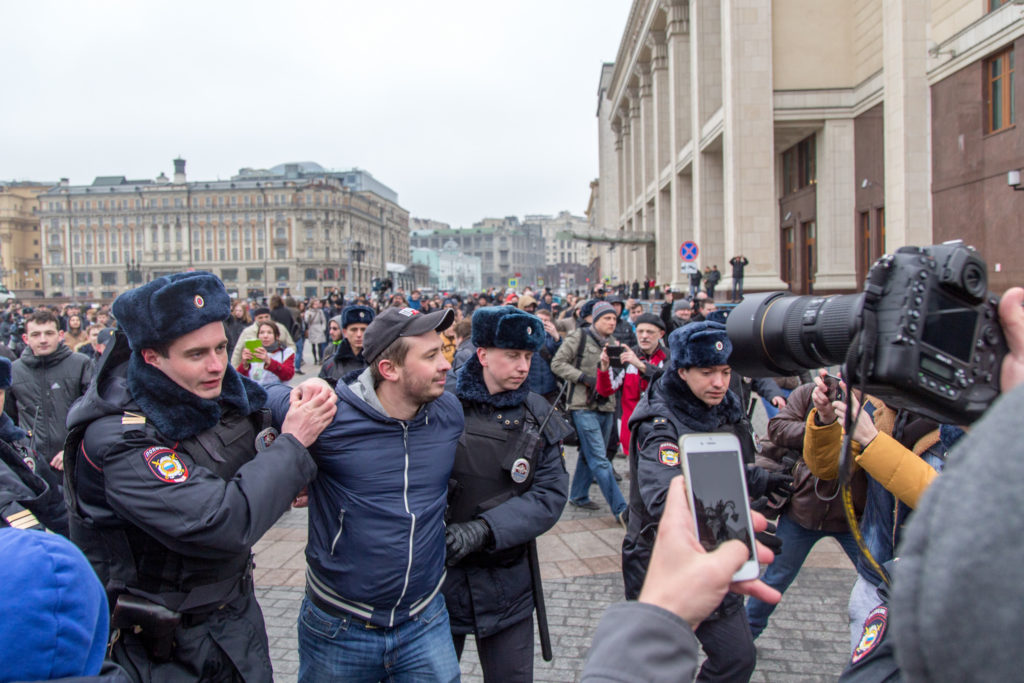 A wave of anti-corruption protests in Moscow this year, mostly fueled by young people, has the Kremlin and opposition leaders trying to appeal to an unclaimed voting bloc. (Julian Buijzen/Flickr Creative Commons)

MOSCOW — This year, four waves of protest — in March, June, October and November — brought thousands of Russians into the streets to oppose Russian President Vladimir Putin and a corrupt Russian government. The citizens fueling these protests? Mostly young people.

As Putin announced Wednesday that he will seek another term as president in the March 2018 election, a growing number of Russian youth are pushing for political upheaval. Both the Russian establishment and anti-establishment have taken notice.

“I’ve met many young people far out beyond Moscow who reject this regime, and we need to be reaching these people,” said anti-Kremlin politician Vladimir Kara-Murza at a panel on Russian democracy in Washington, D.C.

Winning in 2018, however, is not necessarily the opposition movement’s priority.

“We approach elections as an educational effort,” continued Kara-Murza. “In many cases it’s impossible to win, but it’s always possible to learn.”

Putin, at 65, is finishing his third term as President. For almost two decades, Putin has concentrated power and remained the sole face of Russia, making a seamless transfer of power difficult. Vyacheslav Volodin, the chairman of the state Duma, once said, “If there’s Putin, there’s Russia; if there’s no Putin, there’s no Russia.”

In the inevitable power struggle, however, the opposition movement sees an opportunity. Russia’s newly-energized youth population offers leverage for the opposition movement as it seeks to elect an anti-corruption candidate. Though Putin is considered a lock to win in 2018, the election could provide a litmus test to see what kind of candidate suits Russia’s newest and most unpredictable voting bloc.

Enter Alexei Navalny, the most popular presidential candidate within the liberal opposition movement. Navalny circumvents state-influenced press by using Twitter, YouTube, and other forms of social media, to report on corruption and to promote his campaign. His anti-corruption message has resonated with young people especially, and he is responsible for organizing every major Russian anti-corruption protests in 2017. In February, Navalny was found guilty of embezzlement, a charge that complicates his 2018 run against Putin and that Navalny argues is politically motivated.

If Navalny is Russia’s litmus test, however, there should be some concern. In one video from 2007, he compares immigrants to cockroaches; he uses a pistol to take care of the pest. In another videothat same year, he makes a similar comparison; this time, immigrants are rotten teeth that need to be pulled. Navalny was removed from his party in 2007 for this brash brand of xenophobia, but recently, Russia has seen a surge of nationalism on both sides of the anti-corruption movement. Navalny is not an opposition leader developed in a Western test tube, and his appeals to Russian nativism have alarmed Western analysts and reporters.

Regardless, young Russians appear  to be optimistic about the future of the democratic movement. “Democracy seems inevitable,” said Muscovite Ekaterina Mikhaylova, 29. “I am really hopeful that we can start building bridges with other countries.”

In reaction, the Kremlin has tried both forceful and persuasive tactics to curb dissent from young people. For example, in response to the June protests, the Kremlin and Duma went about particularly awkward methods to try to win over young Russians.

Recognizing the role social media played in 2017’s protests and in exposing young people to Western values, officials have begun to monitor internet use more thoroughly.

“The Kremlin is trying to bring the Internet under control,” said Miriam Lanskoy, the senior director for Russia and Eurasia at the National Endowment for Democracy. “It is the only sphere where you can get free information, the way you organize people and the way you communicate with the outside world.”

Russia’s Communications Ministry proposed an order requiring instant messengers and social media networks to collect and deliver the Russian government a long list of information from users, including passport number, list of relatives, and full archives of text, audio, and video communications.

“YouTube’s potential to reach politically active youth is enormous,” continued Lanskoy, referencing one of Navalny’s documentaries, “The Kremlin sees this. It sees the potential and, of course, wants to use the Internet for surveillance and control.”

Russia, as we know it today, is still a young country forming its identity. In the coming years, Russia may very well become a more open, transparent democracy—assuming, that is, that the youngest Russians don’t fall victim to their parents’ vices.

Kevin McElwee is a senior at Princeton University. He spent the summer of 2017 in Moscow studying Russian politics and culture.