Kerry the statesman at a crossroads in Paris 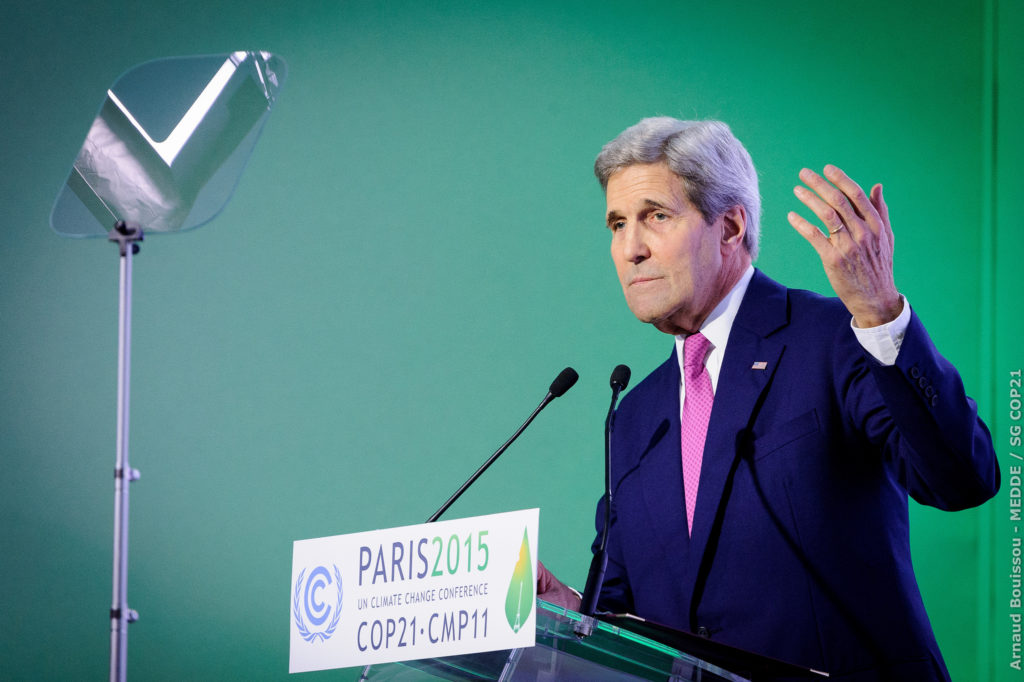 Secretary of State John Kerry at the COP21 climate summit in Paris. (Photo via COP21/Flickr)

PARIS – Two global narratives converged this month in the city of light, and the US Secretary of State John Kerry finds himself at the crossroads of both.

The first is a dark narrative of fear and terror. It struck Paris on Nov. 13 when the so-called Islamic State (or ISIS) killed 130 innocent people, and two weeks later it hit in California when an Islamist husband and wife killed 14, the worst terror attack in the US since 9/11.

The counter narrative is one of light. It came to Paris through the hope brought by a world coming together to save the planet by confronting the impact of climate change — a global security threat that by long-term metrics dwarfs the more immediate threat presented by terrorism.

Amid all the drama over the last month here, Paris has been as close as it gets to a home away from home for Kerry and his tireless staff.

Kerry was here just three days after the attacks to show a “shared resolve” and to pay respects at the makeshift shrine of flowers and candles at the base of the statue in Place de La République near where the attacks took place. And he was here most of the last week for the dogged diplomacy that led to the historic climate change agreement.

Late Saturday night, after the gavel came down and 195 countries had adopted the 31-page agreement at the sprawling convention center at Le Bourget, a jubilant Kerry emerged backstage to greet his waiting team.

After decades of work on the environment in the Senate and five straight days of hammering out the legal, scientific and geopolitical details of this agreement, Kerry pumped his fist in the air like a coach entering the locker room after a big victory. And let’s make no mistake, the 21st Conference of the Parties, or COP21, as the UN meeting is called, was indeed the Super Bowl of international gatherings.

Kerry hugged some key players and congratulated and thanked everyone for the hard work they had done on the agreement. He thanked Susan Biniaz, the State Department’s key legal adviser on oceans and the environment, and he bumped fists with the White House’s senior advisor on climate change and energy policy, Brian Deese.

It was classic Kerry, a backstage glimpse of the man at a moment when it seemed everything in his life as a legislator, as a diplomat, an advocate for the environment, a veteran of war and as a fierce competitor was converging. It was a singular victory that he and so many others had worked on for decades, an extraordinary turning point for the planet, “a sea change,” as he described it.

Kerry’s always been known for his stamina, but over this last week in Paris, where he celebrated his 72nd birthday with a small group of friends, he seemed to be everywhere balancing the joy of the climate change agreement against the grim shadow of terror and the challenges posed by ISIS. There he was delivering a powerful speech at the conference on climate change and receiving thunderous applause from a plenary representing 45,000 delegates and attendees.

There he was standing strong with French President François Hollande in talks on coordinating a stronger response to the Islamic State in the aftermath of the Paris attacks. And there he was on the tarmac of Charles De Gaulle Airport, shuttling to Rome for talks on the rise of ISIS in Libya. And then off to see Putin yesterday in advance of talks in New York City held on Friday aimed at trying to start meaningful peace talks to end the war in Syria.

On Saturday night, Kerry lumbered in the bleak light of the hallways of COP21, here on the outskirts of Paris. The applause of the crowd had quieted. He was limping from the injury he suffered in a cycling accident earlier this year. I walked with him and his staff.

I wrote about Kerry for The Boston Globe at several points in my 15 years at the paper, including a lengthy profile of him in 1996 and interviews on foreign policy on several occasions about everything from drones in Afghanistan to the Law of the Sea. I have had a chance to study Kerry over the years. And it seems to this observer that he is in one of the definitive moment of his life. He is working relentlessly, and it shows. American leadership by Kerry and President Obama had much to do with the historic agreement that was forged in Paris.

Kerry’s hair has gone from a candidate’s salt-and-pepper to a statesman’s silver gray. He looked tired and pale after five days of grueling diplomacy to pull this deal together and strike an international agreement that will limit carbon emissions and get more developed countries to support less developed countries as they adapt to a warming planet. And after a day that began early and was ending close to midnight, Kerry told his staff he needed a shave before he braced himself for a press conference and the Sunday morning talk show interviews.

When he reemerged from the warren of make-shift rooms and offices constructed out of particle board at the US delegation at the COP, he looked surprisingly refreshed, saying to a handful of reporters who were provided access, “I think that we’ve reached an agreement here that is the strongest, most ambitious global climate change agreement ever negotiated. And many of us here in Paris have recognized that we were going to have to do that in order to send a signal to the marketplace that can change the direction that the world is on with respect to dependency on carbon fossil fuels.”

He added, “So this agreement does have the ability to succeed in its implementation where other agreements have fallen short, because they weren’t global. They didn’t include everybody. They didn’t have this kind of momentum behind them. And the bottom line is that this agreement recognizes that we are going to have to begin to change the way we power our planet.”

It struck me as I watched Kerry speaking that in a month swirling with breaking news on terrorism and climate change, there are few public officials in the world who have as measured a grasp of how climate change fits within the matrix of threats the world is presenting these days. Increasingly, we are waking up to a globe where climate change in a resource-constrained world is fueling civil instability that stands to shape conflict in the 21st century. In military parlance climate change is a “threat multiplier.”

Kerry was too busy to stop and reflect on that in the whirlwind of a late night press conference, but he memorably had addressed the subject at Old Dominion University in Norfolk, Virginia last month.

It was the eve of Veterans Day in a place where, for centuries, American servicemen and women have been prepped and shipped off to fight overseas. Kerry served in the Navy during the war in Vietnam and skippered a patrol boat in the Mekong Delta. He delivered a sweeping speech that touched on the impact of global rising temperatures, the arctic melt and how rising tides imperil military readiness.

“Just as the Pentagon has begun to view our military planning through a climate lens, ultimately, we have to integrate climate considerations into every aspect of our foreign policy – from development and humanitarian aid to peace-building and diplomacy.”

“And that starts with getting a better understanding of the complex links between climate change and national security,” Kerry said.

Kerry was speaking in Norfolk just days before the horror of the Paris attacks, before the poignant convergence of these two narratives streams—the fear sown by terrorism in one direction, and the hope that the climate change agreement brings cutting in another.

They were prescient words ahead of a dramatic moment in time that has placed Kerry in the cross currents of history.