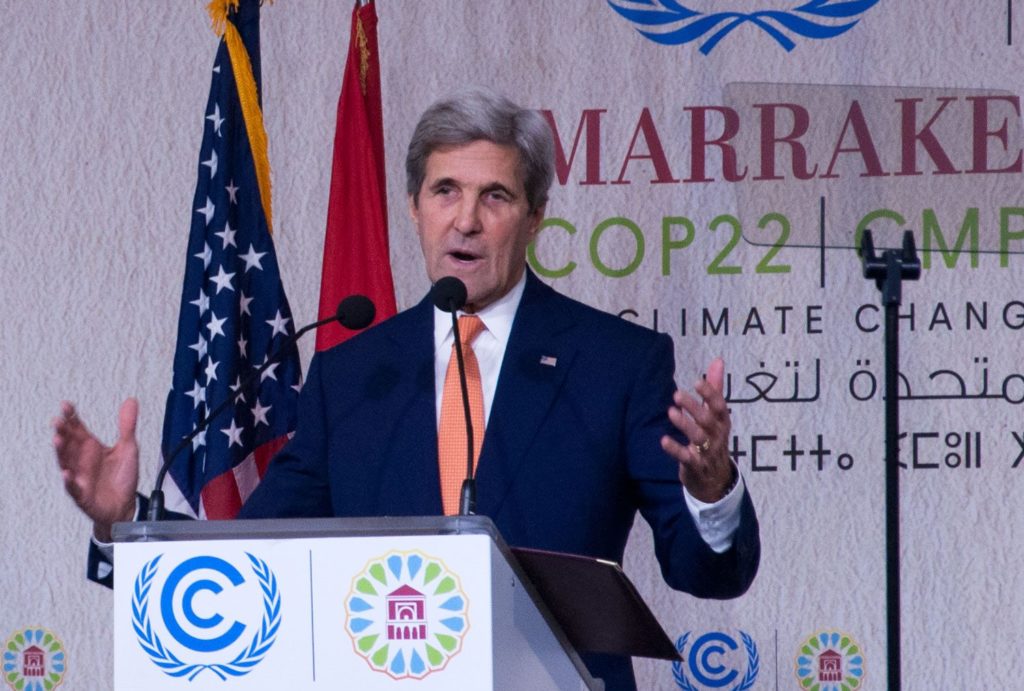 United States Secretary of State John Kerry addressed the COP22 climate talks in Marrakech, one week after the US elected climate denier Donald Trump its next president. (Chris Bentley/GroundTruth)

MARRAKECH, Morocco – Secretary of State John Kerry has attended every major United Nations summit on climate change since 1992. On Wednesday, in what may be his last international address on the topic as a cabinet member, Kerry reaffirmed US support for a global deal on climate change that President-elect Donald Trump has said he will undo.

“No one should doubt the overwhelming majority of Americans who know the reality of climate change and who are committed to keeping our agreement made in Paris,” Kerry said in Marrakech. “We are not on a preordained path to destruction. We have choices. But that requires holding ourselves accountable to the hard truth. To facts, not opinions.”

The lingering question is, how can the US keep its promises to reduce carbon emissions under President Trump, who takes office January 20? Trump has not commented on climate policy since his Nov. 8 election, but during his campaign he rejected scientific evidence of climate change and threatened to “cancel” US involvement in the Paris agreement.

Parties to the Paris Agreement have pointed out it would take Trump four years to formally exit the deal, which came into force on November 4. But Reuters reported this week that Trump may have a shortcut. He could sign an executive order withdrawing the US from the agreement’s parent treaty, the U.N. Framework Convention on Climate Change (UNFCCC), a process that would take just one year.

The results of the US election last week dismayed activists and shocked diplomats in Marrakech, but appear not to have derailed the deal. Delegates, including those from China and the European Union, have indicated that they are prepared to press forward with efforts to cut greenhouse gas emissions. Some even cast the United States’ imminent withdrawal from the deal as an opportunity for other countries to claim a larger share of the booming global market for clean energy technology.

China is already emerging as a leader on that front, reiterating its commitments to launching the world’s largest carbon trading market next year, and declaring it had passed “peak coal” in 2013.  One senior Beijing negotiator called for the US to stay in the agreement as the Chinese delegation began building other partnerships at the summit.

“It is global society’s will that all want to cooperate to combat climate change,” the Chinese official told the Financial Times.

Cañete, who worked closely with Kerry in Paris, said Wednesday, “’We will stand firm on shaky ground.”  He also posted a photo of himself with the outgoing US secretary and wrote, “I will miss this man.”

In advance of Kerry’s arrival, a coalition including China, the EU, Saudi Arabia and Brazil recommitted, while India appeared hesitant. India’s chief negotiator Ravi Prasad adding that if Trump reneges on the deal, “Everyone will rethink how this whole process is going to unfold.”

In a challenge to Trump, who campaigned on a promise to renegotiate trade deals, former French president Nicolas Sarkozy on Sunday proposed that Europe place a carbon border tax on America if it pulls out of the Paris agreement.

While treading carefully with their words, Kerry and other representatives of the Obama administration have attempted to downplay the potential damage Trump could have on global efforts to curb climate change. US Special Envoy for Climate Change Jonathan Pershing said he would have to “wait and see” how Trump deals with the issue, but doubted the rest of the world will pull back investments in renewable energy.

“These are things you would do because they are part of your development trajectory,” Pershing told members of the press in Marrakech on Monday. “I think people take the issue, as they ought to, as a serious problem. And, they are moving.”

Kerry, who was in Antarctica last week touring melting ice sheets with climate scientists, used his bully pulpit at the UN climate talks to cast global warming as a looming threat with a rapidly closing window for action.

“We don’t get a second chance. The consequences of failure would be irreversible. If we lose this moment for action there’s no speech decades from now that will put these ice sheets back together,” Kerry said Wednesday. “We certainly won’t have the power to hold back rising tides as they encroach on our shores. So we have to get this right, and we have to get it right now.”

Kerry expressed hope that Trump, who has called climate change a “hoax,” would change his position once in the White House.

“Some issues look a little bit different when you’re actually in office compared to when you’re on the campaign trail,” Kerry said.

Kerry emphasized the power of the market to drive the deployment of carbon-free energy regardless of political shifts, but warned that governmental leadership would remain essential for achieving the Paris Agreement’s long-term goal of holding average global climate change “well below” two degrees Celsius.

President Obama’s team on Wednesday released its plan for “deep decarbonization” by 2050. Their “mid-century strategy” lays out “how the United States can meet the growing demands on its energy system and lands while achieving a low-emissions pathway, maintaining a thriving economy, and ensuring a just transition for Americans whose livelihoods are connected to fossil fuel production and use.”

Implementing that plan will probably have to wait.