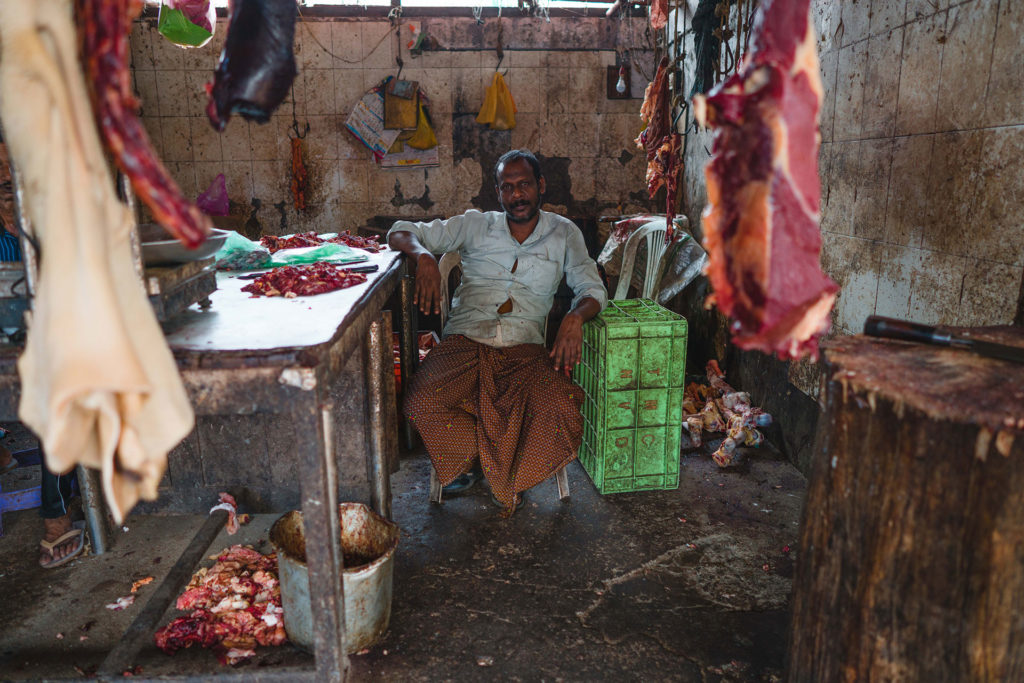 Abdul Salam is a butcher at a beef stall in Ernakulam Market. (Photo by Richard Tamayo/GroundTruth)

KOCHI, India — Deep within the buzzing market, away from vendors who deal in spices, jewelry, fabrics and religious materials, a community of butchers finds space to do business.

In one corner, a half-dozen beef carcasses slowly rock back and forth on meat hooks as flies swarm around them. Bloody piles of discarded meat lay scattered on the table while three butchers sit around chatting in the local language.

For many Hindus, who make up 80 percent of India’s 1.3 billion people, cows are sacred creatures.

India’s constitution encourages the prohibition of cow slaughter, but ultimately leaves it up to each state to decide whether or it’s allowed. In May 2017, India’s ruling party, the Bharatiya Janata Party (BJP), under the leadership of Prime Minister Narendra Modi, attempted to impose a nationwide ban on the sale of cows for slaughter.

In Kerala, the state where Kochi is located, the beef ban was met with opposition. The state’s ruling Communist Party of India (Marxists) decided not to enforce the ban. College activists organized across the state, staging public displays of beef-eating in protest of the central government’s decision. Mohamad Mustafa, 21, a member of the CPI’s Student Youth Federation, organized a protest at Maharajas College in Kochi. For Mustafa, a Muslim, the issue is personal freedom.

“It’s one’s privacy what to eat, and what to drink. There is a respect for each and everyone. Do you think if a person is eating vegetarian food, we will provoke him to eat non-vegetarian?” he asks.

The BJP’s political platform has been built from an ideology that is part Hindu and part nationalist. Since coming to power, the party has tried to rally support by focusing on religiously charged issues like the Sabarimala temple controversy and the Kashmir separatist movement.

Members of the BJP have condemned Kerala for the tolerance of cow slaughter. Basanagouda Patil Yatnal, a member of  the state of Karnataka’s legislative assembly, suggested last year’s destructive floods in Kerala were punishment for the state’s liberal meat policy.

“‘In Kerala people openly slaughter cows,’ he told the Times of India last year. ‘What happened? Within a year, a situation like this (flood) arose.’”

In some states, especially those with large Hindu majorities, Muslims suspected of eating beef have been the victims of violent attacks by groups of religious vigilantes. According to the Human Rights Watch, the violence against Muslims has been fueled by the rhetoric of the BJP.

Despite the 2017 beef protests, harsh rhetoric by members of the BJP and the acts of violence committed in other states, people in Kerala don’t think that cow slaughter will be a prominent issue in their state in the ongoing general elections.

Radeesh, a Hindu, has been working as a butcher for 25 years and manages two other men, Abdul Salam and T. Irfan. Both are Muslim. Through a translator, Radeesh tells me that he thinks that although cow slaughter has been the subject of political debate in India over the past few years, Kerala’s strong Communist Party and its religious diversity prevents the issue from taking root there.

In Kerala, Hindus don’t hold as large of a majority as they do nationwide. The group represents about 55 percent of the population, while Christians and Muslims together represent about 45 percent.

Sanjose A. Thomas, an associate professor of sociology at Sacred Heart College in Kochi, says that because Kerala has a history of Muslims, Christians, and even Hindus eating beef, the right wing knows it will not be easy to impose a blanket ban, and will therefore not be pushing this issue forward like it has in other states.

When asked about the BJP’s stance on cow slaughter in Kerala, party member CG Rajagopal would not directly say whether the party planned to push forward a beef banning agenda in the state. Instead he said that although he believed the slaughtering of cows was wrong according to his Hindu beliefs, the issue should be determined on a state-by-state basis.

Across from Radeesh’s stall, Asha Latha and her family hose down the bloody tile around them. Latha is a Muslim who eats beef but deals in mutton to avoid competition with the stall across from her. Latha says that slaughtering cows and eating beef have become normalized in Kerala and will never be a political problem like it is in northern India.

Some Hindus don’t have the secular stance that Radeesh has. Suresh Ranjendra Nair, the owner of Sree Ganesh vegetarian restaurant in Kochi, says he sees his business as a service that is trying to serve food that is “purer.” He has a garden where he grows Ayurvedic herbs for his vegetarian recipes. He says that because of the Muslim influence on politics in Kerala, beef will never be banned, but he would support a ban if it were possible.

For now, Kerala is a safe place for those who deal in beef. P.K Sreekumar, an English professor at Muharajas College, says that the state has more pressing issues that people will be paying attention to in the ongoing general election.

“People are experiencing higher levels of unemployment, poverty, lack of liquid cash,” he explains. There are a lot of issues. So you cannot depend on an emotional subject like beef for long.”