Kent State and the photos that changed a nation 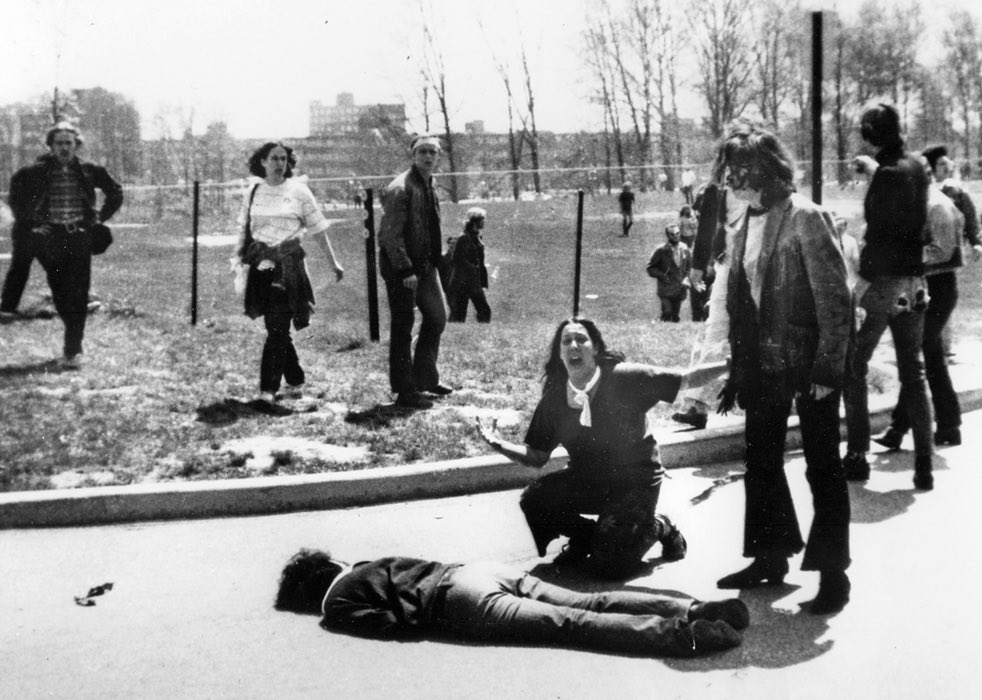 This photo of Mary Ann Vecchio kneeling over the body of Jeffrey Miller after he was murdered by Ohio National Guard soldiers, shocked the nation and helped to change public opinion about the Vietnam War. (Photo by John Filo)

There are some photographs so ingrained in the public mind that they hardly need to be described. For Americans, John Filo’s photograph of Mary Ann Vecchio at Kent State on May 4, 1970 is among them. The 14-year-old is mid-scream as she kneels over Jeffrey Miller’s body after he and three other students were shot dead by members of the Ohio National Guard moments earlier. Four dead in Ohio.

In early March, just before campus closed, I had the chance to visit Kent State and exhibit my photographs of the Iraq and Afghanistan wars. I arrived, unsure of how my imagery of U.S. troops would be received in the context of the 50th anniversary of the 1970 shootings.

It was foggy and drizzling the night I got there, and I couldn’t sleep. I put my raincoat on, and walked across campus until I arrived at the site of the massacre, unwittingly following the path the soldiers marched along. I walked to the crest of a gentle hill to look down upon the parking lot where four students died and nine were injured. Through the blowing mist, the site of each death glowed in pale light, and it was one of the most moving memorials I’ve seen.

I spent the bulk of my career photographing the wars in Iraq and Afghanistan, and think frequently about how audiences engage with pictures of violence and death. What photographs turn the tide? Why did photographs of the Vietnam War, credited with turning public opinion against it, resonate so powerfully with huge audiences? You can easily call to mind Eddie Adams’ picture of a Saigon execution and Nick Ut’s picture of 9-year-old Phan Thi Kim Phuc, naked and burned by napalm, because these are also indelible photographs of history. An armada of photojournalists descended on Iraq and Afghanistan equipped with better, faster and more reliable ways to record the realities of war.  But the pictures with global, public reach were not taken by photojournalists at all (the video of Marines urinating on a dead Talib, the footage of Apache pilots joking about their targets on the ground, just to mention a few.) It was whistleblower-released pictures of the torture of Iraqi prisoners at Abu Ghraib that shocked and resonated with people all over the world.

It’s not that the content of the Abu Ghraib photographs was gorier or more striking than, for example, Chris Hondros’ picture of 5-year-old Samar Hassan, spattered with blood and screaming after her parents were gunned down by U.S. soldiers in Iraq. Many photojournalists covering those wars demonstrated incredible courage to get amazing images that generally fell on deaf ears back home. That may be because their pictures communicate the perspective of a highly trained visual professional, while the Abu Ghraib pictures communicate the perspective of a young soldier, bewildered, boastful of their war crimes. Both images present an accusation to the American public, but the visual tenets of photojournalism present an accusation limited to the facts of the accidental killings, while the accusations from the Abu Ghraib photographs reflect a deeper argument about the corrosive effect that the war has on people’s souls. (Other important vernacular works about the American wars include Geert van Kesteren’s Baghdad Calling, Monica Haller’s Riley and His Story, and Miles Lagoze’s Combat Obscura).

It was strange being at Kent State, surrounded by the deeply moving reminders of May 4th, and yet working in a professional context where my photojournalism can’t function the way John Filo’s did, and still does. Being there on campus, I realized that Filo’s picture helped shape my conception of what it means to be an American, and that I went to Iraq as a 24-year-old to find answers to that same question.

When it comes to spot news and photographs of something shocking, the “quality” of the picture really doesn’t matter; no one cares anymore whether a professional or a bystander took the shocking picture. The tenets of zoom-lens photojournalistic composition only communicate that you’re a trained photojournalist, or imitating one. It’s more about being there, and since nearly everyone has a phone with a camera, there is usually someone there to be a witness; to spread whatever imagery they capture further through the democracy of social media. Yet, news photographers have tremendous value in this moment and those to come, by digging deeper into the story behind their images, by connecting threads between opponents or agitators, by allowing a community to see itself reflected fairly and with dignity.

Photography has the power to communicate, and photojournalism has a critical role to play amid the deluge of imagery. That is why it’s so important to support and train the new generations of photojournalists, so that when they find themselves witnessing history, as John Filo did on May 4th, 1970, they have the knowledge to capture the moment and its significance for posterity.

The story of how local media covered the Kent State Massacre and how their reporting, including these images, set the historical record of the events of that day, is further explored in Robert Giles new book When Truth Mattered, available on Amazon.com, Goodreads.com and bookshop.. Giles has has pledged to donate a portion of the book’s profits to GroundTruth each year to support its mission to restore local journalism from the ground up. Read more here.