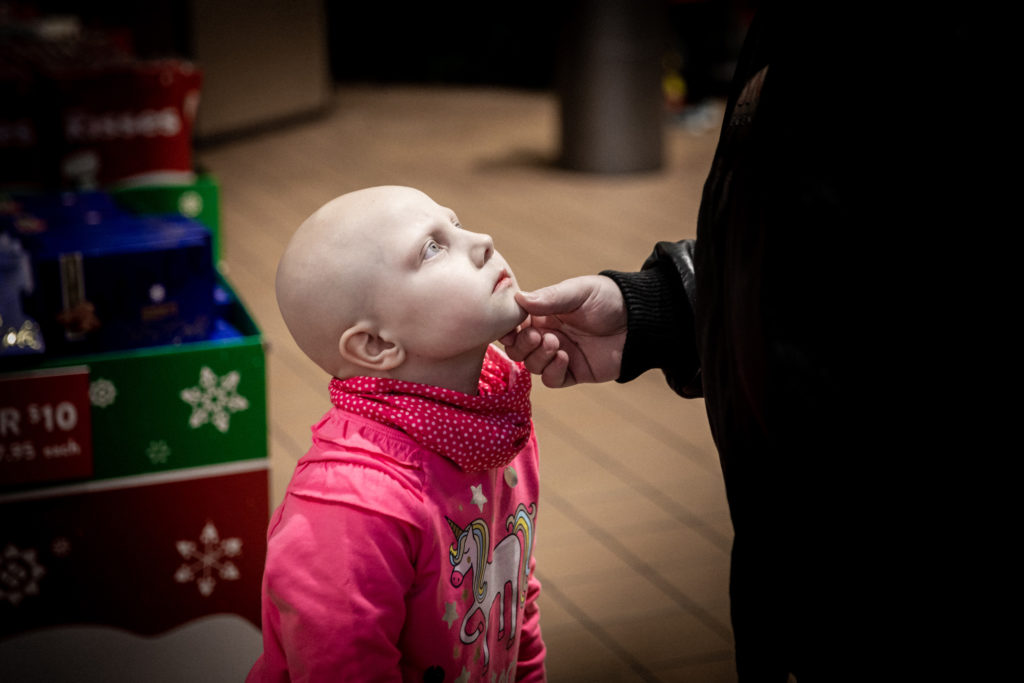 Kaylee and her father, Todd, share a moment during their family vacation to Hershey Park in November 2018.

On February 1, 2018 Kaylee Marshfield turned 6 years old. That same day her parents received a call that explained why their oldest daughter, Kaylee, had been sick for the past month. Todd and Kristina were told that Kaylee had a Wilm’s Tumor, a rare form of childhood cancer, growing in her chest.

I met Kaylee and her family in August 2018 at the New York State Fair; it was six months after she had been diagnosed and at the time Kaylee was in the midst of chemotherapy treatment, having lost her hair and a significant amount of weight. I spent the remaining five days of the New York State Fair with Kaylee and her family, slowly earning their trust and learning more about Kaylee’s condition and the family’s struggle to endure the financial and emotional strain of having a very sick child.

For weeks and then months following the fair, The Marshfield’s allowed me to continue spending time, making photographs of what I originally believed was a story of a little girl’s battle with childhood cancer. As time passed and we became close it became clear hers was not “just” the story of a child with cancer but rather one of the nuanced dynamics of a family as they together navigated her diagnosis, treatment and life once found cancer-free.

Spending time with Kaylee and her family quickly evolved into being invited on family vacations, visiting on holidays and attending karate practice and school recitals. Through it all, Kaylee has done her best to balance life as a first-grader, daughter, sister and cancer patient with the grace and maturity of someone many times her age. 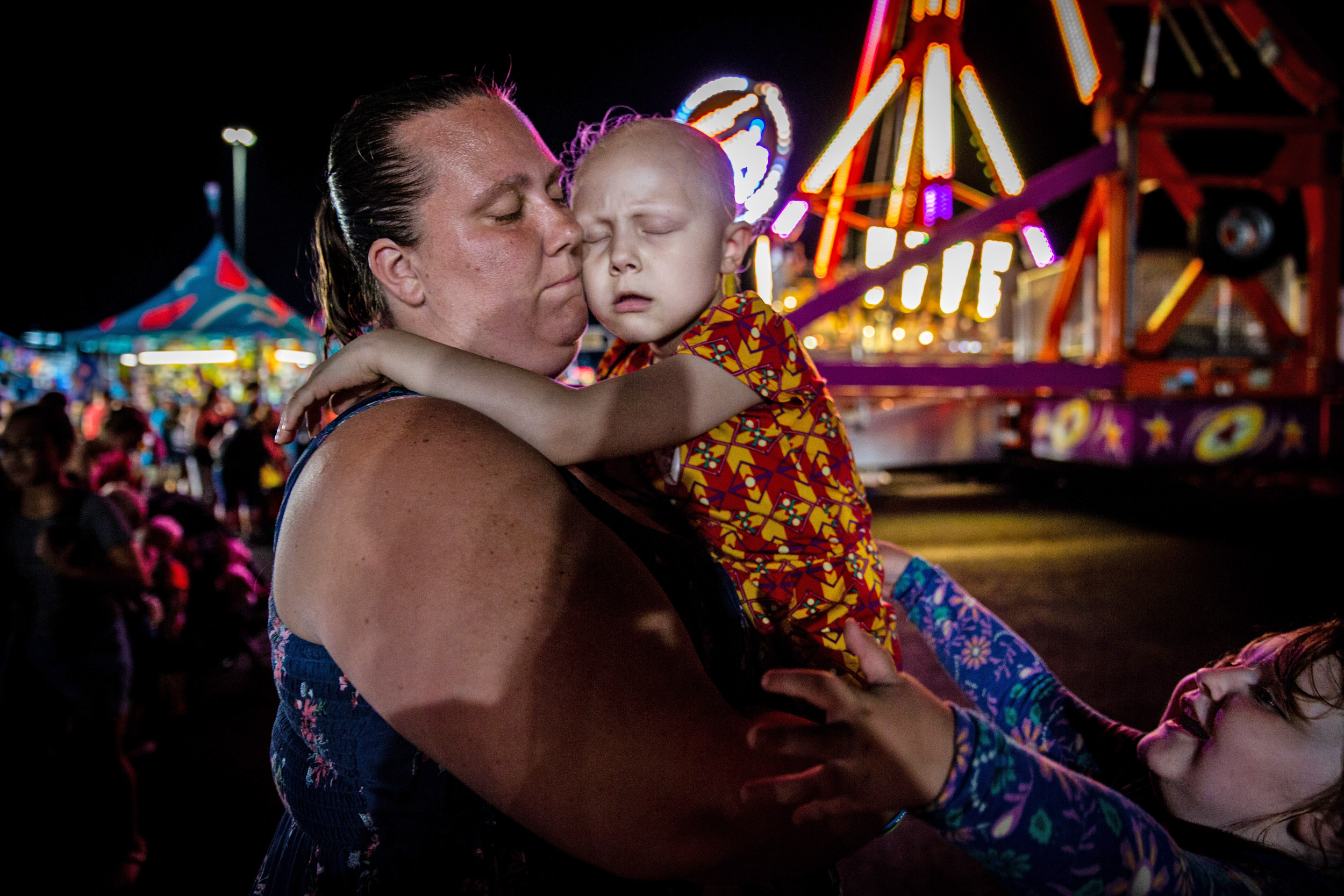 Kaylee and her mother, Kristina, embrace at the end of a long day as Abigail, Kaylee’s younger sister, reaches out for attention. Abigail, age 5, does not understand why Kaylee is suddenly the recipient of gifts and extra attention; her confusion and misplaced jealousy has caused friction between sisters who just months before were inseparable. (Photo by Maranie Staab/GroundTruth)

If someone would have told me that one of the most significant relationships I’d form while in Syracuse would be to a young girl of 7 I’d have found that difficult to imagine. And yet, nearly a year after moving from Pittsburgh to Central New York I look at having met Kaylee and the Marshfield family as a rare and treasured gift. 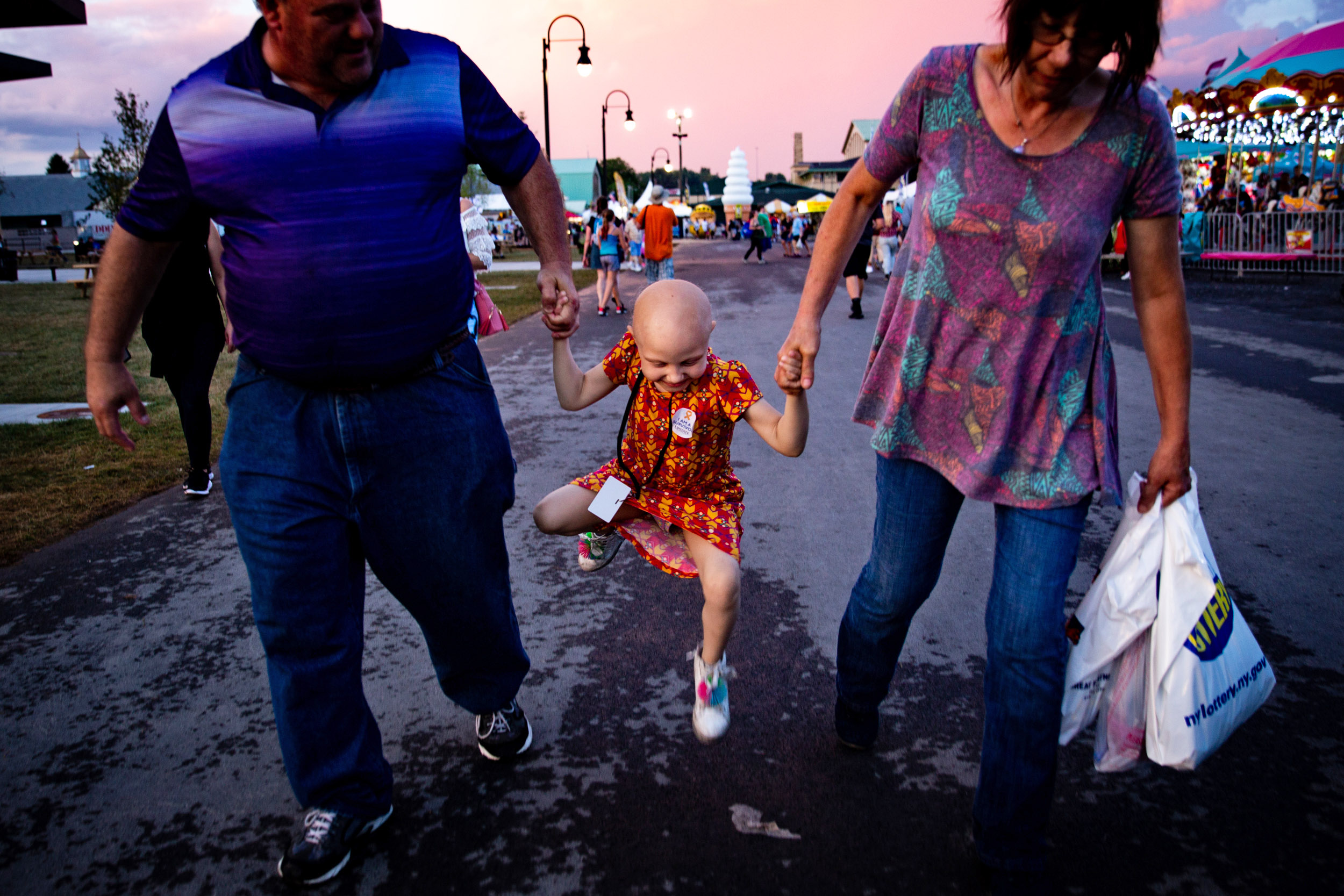 After nine months of chemotherapy and several surgeries Kaylee was officially declared cancer-free on October 22, 2018. The date marks the end of one chapter in Kaylee’s life and the beginning of the next—one where I have the privilege of being a small part of as I continue to photograph her story. (Photo by Maranie Staab/GroundTruth)

As a photographer, working with Kaylee has been the most organic and naturally evolving story I’ve ever been part of. She has taught me the value of long-term work and has made clear that time and establishing trust are perhaps the most important elements in creating intimate images.

I’ve much gratitude for this 7-year-old; without knowing it, she has kept me grounded and in touch with my own inner child, providing balance and an element of life I hadn’t known was missing. This is ongoing work, without parameters or specific expectations. I have told the Marshfields that I will be a part of their lives for as long as they’ll have me, well beyond my graduation in December 2019. We’ve joked that someday Kaylee will need someone to photograph her graduation … I have not so secret hopes I will get to be that person.