To Jordan’s Bedouins, MERS is ‘only a story’ 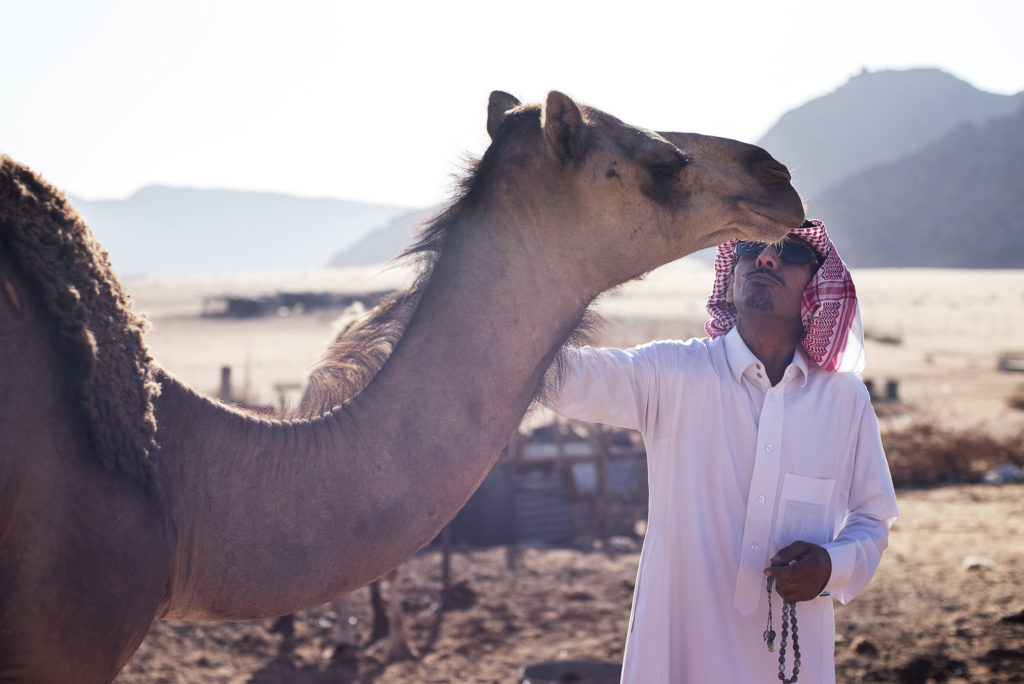 Abu Sultan al-Mazana greets one of the six camels he keeps penned behind his home in one of several villages in southern Jordan's Wadi Rum desert on August 6, 2015.

On the first day of a three-day summer reporting trip in Jordan’s southern Wadi Rum desert, Bedouin herder Salman Awedi al-Mazana makes something clear before the interview even begins.

“I want to say that MERS is only a story,” the 62-year-old Jordanian says, without even looking at me.

This brush-off is a common one here.

It’s been three years since MERS cases first began emerging in Middle Eastern cities. The respiratory illness carries a 40 percent mortality rate and is part of the same coronavirus family as severe acute respiratory syndrome (SARS). With symptoms that mirror those of a cold or influenza, it’s difficult to catch it early enough to contain. Some 1,400 people have been infected worldwide and 500 have died.

Epidemiologists believe MERS was initially passed to humans after dromedary camels were infected by bats. But how this actually happens is still up for debate. No one can answer, for example, whether the frothy camel milk Bedouins have consumed for centuries may also be a vehicle carrying MERS from camel hosts to their owners.

But camels are both a source of livelihood and heritage in Wadi Rum. The ones al-Mazana watches graze in front of us range in price from $3,500-$4,500. He says those used for racing or showing are even more valuable.

“For us, they are money in the bank; instead of a shop, we have these camels,” al-Mazana says.

The animal’s possible role in spreading the virus is met with bitter skepticism by the Bedouins of Wadi Rum, and details of Jordan’s intermittent MERS outbreaks don’t support the theory, either.

Both in Jordan and neighboring Saudi Arabia, where the bulk of the world’s MERS cases have occurred, the virus tends to show up in bustling cities and flourishes in hospital settings as facilities struggle to isolate patients before they infect others.

Meanwhile, Jordanian officials haven’t reported a single MERS infection here in Wadi Rum. Some 20 cases have been reported country-wide since 2012, all of which have occurred some 200 miles north, in or near the capital Amman.

Back then, 10 cases showed up in three different hospitals in the capital and the nearby city of Zarqa. Though Jordanian health officials moved quickly to contain the outbreak, Abdelrahim said a media frenzy triggered an aftershock of fear across the country.

“There was a huge exaggeration about MERS in newspapers, sometimes they would say that tons of people had died, or that the Ministry of Health was hiding information,” Abdelrahim told me just before my trip down south. ”Since we don’t have a vaccine and it has a high mortality rate, people started to panic.”

Caricatures of the virus appeared all over Arabic media following that 2014 outbreak. Abdelrahim showed me one where a lab coat-donning doctor is crouched over a magnifying glass, asking whether the tiny glob he’s inspecting could be the MERS virus. Meanwhile, a giant, green monster looms behind him, a dead camel spiked on its back.

In Amman, public concern for the virus soon faded along with the caricatures. But Abdelrahim said the uncertainty surrounding it means attention shouldn’t lag.

“Of course it is a potential threat, we should always keep an eye out because it can come again,” the physician said late last summer. “We don’t know how the virus suddenly appeared and suddenly disappeared.”

A few weeks later, Abdelrahim’s warning rang eerily true when doctors in Amman identified a MERS infection in a Jordanian man returning from Jeddah, Saudi Arabia on August 25. Ten more cases sprang up, many of which were connected. It was the first time in eight months the virus struck the country, and though investigations by the Jordanian Ministry of Health are ongoing, cases so far aren’t linked to camels.

Back in Wadi Rum, I thought of the comic Abdelrahim showed me in Amman as al-Mazana stared at his own skinny-legged camels, their figures dotting the horizon as the sun began to set.

His wife had just finished pouring steaming tea into glass mugs. Swatting away the flies that had gathered on the camel milk froth, she dumped the thick white liquid into the tea water, turning it caramel.

He picks up one of the glasses and hands it to me. “Are you going to try some milk?” He asks.

It’s all just a “story,” according to al-Mazana, invented by outsiders just like me.

I hesitate for a moment.

Alisa Reznick reported on MERS from Jordan for “Next Outbreak,” a multimedia collaboration of The GroundTruth Project and NOVA Next, in association with WGBH Boston.