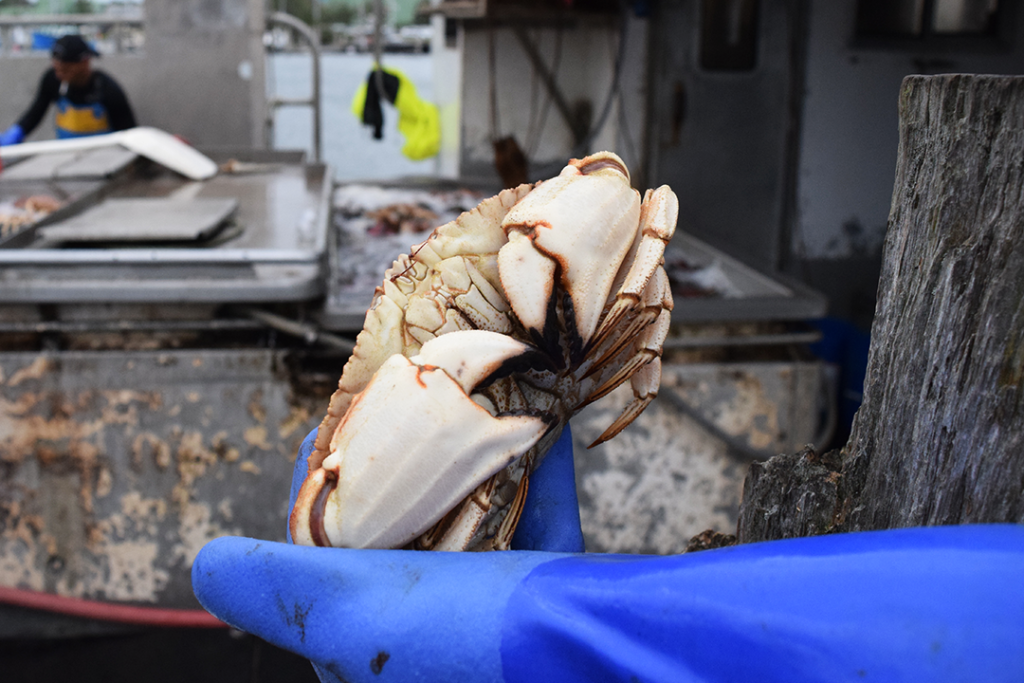 Jonah crab are sturdy, hard-shelled creatures with black-tipped claws. They weigh about a pound apiece. (Photo by Pien Huang/WCAI)

This is the second of the three-part series, Indicator Species: New England Fishermen and the Challenges of Climate Change.  You can find part one here.

The lobster industry in southern New England has been on the decline for decades. As waters warm, some lobster fishermen are adapting by switching their catch to Jonah crab, a crustacean once considered a trash species.

Mike Palombo is captain of a 72-foot lobster boat, but his main catch is crabs.

He leaves from the Sandwich Marina for three-day fishing trips, going out over 100 miles to haul traps in the Canyons. One day this fall, he and his crew returned with around 23,000 Jonah crab and 2,000 lobsters in big saltwater holding tanks. “It was a good trip, very productive,” he said.

Jonah crab are sturdy, hard-shelled creatures, with black-tipped claws. They’re about a pound apiece. You might not have heard of them, but Jonah crab are sustaining Southern New England fishermen left stranded by the decline of lobsters.

Tracy Pugh, a lobster biologist with the Massachusetts Division of Marine Fisheries, said there’s been a drop in the lobster population south of the Cape, in part because the water temperature is rising. “The Southern New England lobsters are experiencing the bad aspects of climate change,” she said, “because they’re already in the southern extent of their range.”

Pugh says the warmer water is causing the lobsters to experience physiological stress. It’s also bringing in new diseases that affect lobster, and an uptick in predators like black seabass and tautog.

As lobsters declined, fishermen started filling their traps with this species that was once considered bycatch. In the past decade, Jonah crab landings have tripled, from about 4 million in 2007, to 12 million last year.

Derek Perry, a crab biologist for the Division of Marine Fisheries, says the price of Jonah crab has also doubled over the same time period, from $0.50 per pound in the mid-2000’s, to around $1 per pound today, making it an increasingly viable way for fishermen to make a living.

Now, it’s the fifth largest fishery in the State. It’s bigger than haddock and herring, bringing in over $11 million a year to fishermen. About 90% of the Jonah crab fished in America land on the shores of Rhode Island and Massachusetts.

Perry said the growing industry is trying to make sure the catch is sustainable. “They basically saw what happened to lobsters in Southern New England, and didn’t want that to happen to Jonah crab,” he said. To help sales, and to help ensure the longevity of the fishery, the industry organized a group of stakeholders fishermen, processors, dealers, supermarket representatives and scientists—and worked on a plan.

It led to US fishery regulators implementing their first-ever Jonah crab management plan, in 2015. It doesn’t include catch limits, but it puts some basic conservation measures in place, like restricting the size and sex of the crabs they can keep.

Dennis Colbert and his brother Robert own two boats that go for Jonah crab, including the one captained by Mike Palombo. He says that making the shift from catching lobsters wasn’t hard. He used the same lobster boats, and catches Jonah crab in the same traps. To target the crabs, he switched around the locations of the vents, and changed the bait.

In some ways, it’s made his life easier. Crabbing trips take just three days, instead of the longer, ten-day trips for lobsters.

The Colberts also own the Fishermen’s View Restaurant and Market, just across the Sandwich Marina, where they sell their catch.

Switching to Jonah crab might have been obvious for fishermen, but hooking diners on a new food takes a different type of creativity.

Roberston called Jonah crab meat “super, super, super sweet,” and said it beats blue crab for flavor. He hopes one day to see his Jonah crab cakes up there in the Cape Cod classics, right next to fish and chips and lobster rolls.

I don’t think it’s a species that’s going anywhere,” he said. They come in by the boat-full, a couple times a week.

But the fishery is just getting established. There’s still a lot we don’t know about the Jonah crab. There hasn’t been a stock assessment, so no one knows how many there really are, or what their life cycle is. We don’t know when they molt, or where they migrate. And we don’t yet know how the Jonah crab will respond to climate change.

Here are some recipe ideas and tips from chef Scott Roberston for preparing Jonah Crab at home.