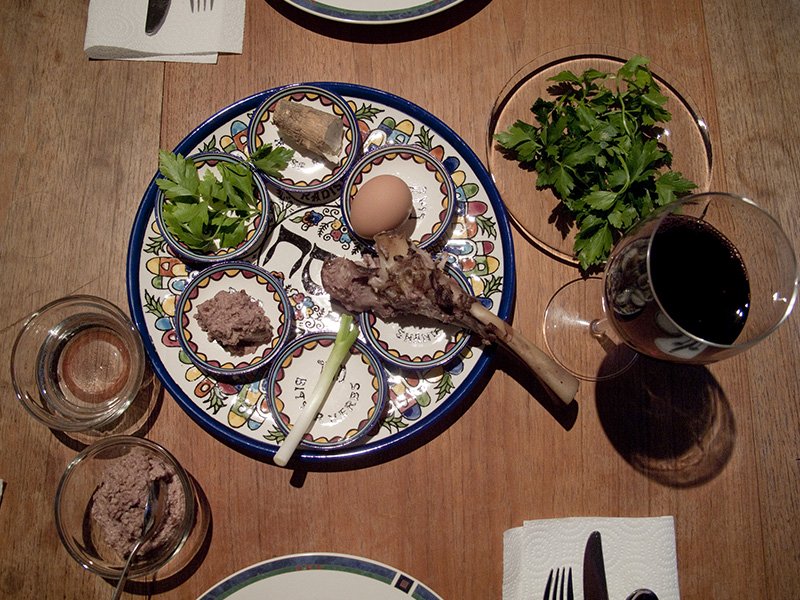 Why is this night different from all other nights?

It’s the millennia-old question Jewish communities around the globe ask each year at Passover. But this year, when Passover begins at sundown Wednesday (April 8), that question will have new meaning as friends and families prepare for an isolated — and in many cases virtual — Passover celebration.

In an unprecedented ruling late last month, some Orthodox rabbis in Jerusalem loosened typically strict prohibitions on the use of electricity, allowing families to connect on Zoom for the Passover Seder.

In the United Kingdom, the London Beth Din’s kosher certification agency, the largest in Europe, upended 500 years of tradition when it permitted certain products that are not kosher for Passover to be used for the Seder “in extremis,” even though they had not been manufactured under special rabbinic supervision.

“We are acutely aware of the pressures of this unprecedented time,” Rabbi Jeremy Conway, director of the agency’s kosher division, said in a statement. “This list should be used when regular supervised products are not available, or for people who are older or in isolation and so are unable to go shopping themselves or have Pesach (Passover) products delivered to their home.”

Passover commemorates the Israelites’ exodus from slavery in ancient Egypt 3,000 years ago and is by far the most widely celebrated Jewish holiday in the U.S., according to a 2013 Pew Research study. While 23% of American Jews regularly attend synagogue services, 70% attend a Seder. The numbers are almost identical in the United Kingdom.

Even with the concessions to virtual Seders and a shortage of groceries, COVID-19 will provoke changes in the essential nature of Passover celebrations, some Jewish leaders say.

“The very name of our celebration, Seder, means ‘order,’ yet here we are at a time of unimaginable uncertainty,” said Rabbi Jesse Paikin, a rabbinic fellow at Sixth & I, a nondenominational Washington, D.C., synagogue, at the start of his Zoom tutorial on “how to lead a virtual Seder.”

Nonetheless, Paikin sees the coronavirus pandemic as an opportunity to be more connected and inclusive. More Jewish households worldwide are now expected to host their own Seder than ever before. “That’s one of the blessings of moving everything online,” Paikin said.

OneTable, a nonprofit that encourages American millennials to host in-person Shabbat dinners, is shifting its focus to facilitating virtual Shabbat and Passover meals. “We’ve been addressing issues of connection and social isolation since our founding and now, through COVID-19, this has been exacerbated,” said Aliza Kline, founding executive director of OneTable. “Now there’s no limit to the number of people who can join you virtually at your dining room table.”

OneTable recently unveiled a new Passover-focused website to support its popular app, which Kline describes as “Airbnb combined with Evite,” to help Jewish people host and join a virtual Seder. “The key for us was to help people still maintain that feeling of connection and belonging while having tremendous empathy for people who are alone,” she said.

Since launching in mid-March, there are more than 300 virtual Seders registered on the OneTable website across 20 U.S. cities.

But not all Jews will gather online for Passover.

Educator and mental health advocate Marc Fein plans to ask himself the four questions traditionally posed during the Seder out loud — then answer on his own.

That’s because Fein will be holed up alone in Tel Aviv, where he moved in January, rather than flying to New York, as he’d planned, to spend the holiday with family.

“The new Israeli regulations prohibit spending the holiday with anyone who you don’t already live with,” he said. “Otherwise I would have joined my aunt, cousins and zeidy in Jerusalem,” using the Yiddish word for grandfather.

Fein, who is Modern Orthodox, won’t be holding a videoconference Seder with his family, because he doesn’t do “work,” which includes using electricity, on the Sabbath and certain holidays.

Instead, Fein prepared meditations and guided questions for himself in the hopes to “create a reflective and meaningful experience, even if it is different than what I am used to.” Because so many others will be unexpectedly solo for the holiday, he and friends — particularly Dasi Fruchter, an educator and religious leader — created a guide to help others.

“The purpose of the guide was to give permission to people to feel upset that they won’t be with their family, and that the Seder won’t look like their childhood memories or what they envisioned,” he said. “And, to provide ideas for how they can creatively embrace their current reality and create meaningful memories with their families, new traditions for themselves, and intentionally immerse in the rituals of the Seder night.”

Still, he’s glad there’s been a conversation about Zoom Seders, given the mental health issues with which many are suffering in isolation.

And he’s not above taking steps to mitigate his own distancing. Fein proposed exchanging emails with his family, so that each person could print the letters out, unread, before the holiday.

“Even though we aren’t going to be physically present this year, we are going to create emotional presence by sending each other letters to open and read at our respective Seders,” he said. The family will also gather on a pre-holiday Zoom call to exchange blessings between parents and children that would otherwise have transpired on the holiday.

Rabbi Meir Chaim Posner, Chabad’s director of education at Yale University, also won’t go virtual because, like Fein and many Orthodox and ultra-Orthodox observers, he treats the first night of Passover like Sabbath.

On any regular Friday night or festival, hundreds of students and community members would congregate with Posner at Yale’s Chabad house to pray and eat. But for the past two weeks, he and his young children have been uploading short sermons and L’chaims on the group’s Facebook page and preparing dozens of Shabbat to-go packages for the student community, consisting of candles, challah, grape juice and a two-course meal.

“We all suited up with gloves and masks and disinfected our kitchens entirely,” said Posner, who partnered with a professional caterer to help ensure food safety. “We minimized contact with people by leaving bags of the food at the front of the Chabad building to allow people to pick up their personalized bags.”

The New Haven, Connecticut, area had 241 confirmed cases of coronavirus and nine deaths as of April 5.

Rabbi Rick Jacobs, president of the Union for Reform Judaism, which identifies itself as the largest Jewish movement in North America, offered a reminder that Passover can provide comfort in even the most painful of times.

“The Passover seder is exactly what we need to help us face this frightening moment with the threat of coronavirus looming over each of us,” Jacobs said by email.

“No matter how challenging circumstances have been for our people in history we have still found a way to remember the ancient deliverance from bondage to freedom,” Jacobs continued. “Even during the Holocaust the exodus narrative at the heart of Passover conveyed the message that no matter how dark the hour there always exists the hope of a better tomorrow.”