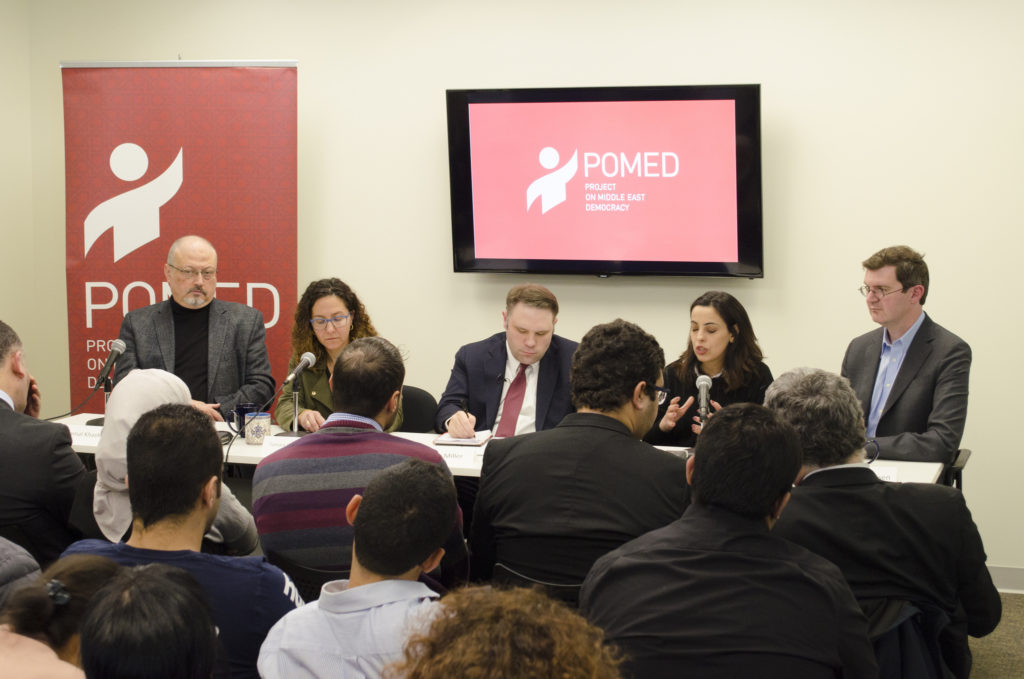 Jamal Khashoggi (far left) was one of few journalists with an extensive knowledge of Saudi Arabia's government and culture. (Photo by the Project On Middle East Democracy/Flickr)

In the aftermath of the attacks of September 11th, 2001, I went to Saudi Arabia to set out on Highway 15, a road built by Osama bin Laden’s father and where bin Laden recruited 12 Saudis who were among the 19 hijackers who attacked the World Trade Center and the Pentagon.

The idea for the assignment was that this road that stretches into the badlands toward Asir province near Yemen could lead me to an understanding about who these young men were when America was asking itself the question: “Why do they hate us?” As the Boston Globe’s Middle East correspondent, a person I consulted on that journey into the heartland of Saudi Arabia was Jamal Khashoggi, one of the most important independent journalists in the kingdom. Perhaps the only important independent journalist in the kingdom. It was a time when our country desperately needed to understand how a purported ally had spurred not just the founder of Al Qaeda, but inspired the young soldiers who would carry out his apocalyptic vision for the attacks.

Khashoggi was an invaluable resource for many of us who cover the Middle East. He gave us what we call  ‘ground truth’ — a technical term that refers to a process of calibrating analysis through the gathering of real facts on the ground.  Khashoggi was our lens for this calibration process and he was critically important to understanding what was happening on the ground in the country where he was born.

But he was also important to all of us from many corners of the world, but particularly for American journalists, who’ve spent a lifetime trying to get at the ground truth of the region. Last year, as he became an American resident writing analysis for the Washington Post, he also became an important voice in American journalism.  So we should all be distressed when our government in Washington soft pedals gruesome reports out of Turkey of audio recordings and video surveillance indicating the presence of a hit squad with connections to the House of Saud that allegedly took part in torturing, beheading and then dismembering Khashoggi.

We should all be concerned when the President of the United States calls journalists “the enemy of the people” and how that message is rippling out to autocratic regimes and providing a green light for locking them up, or in this case allegedly murdering them.  We should all be concerned when Trump and his mouthpieces in the far right media once again weaponize doubt, saying we may never know who killed Khashoggi, or when Trump puts forward the preposterous theory that it was “rogue” actors.

Remember, this was done inside the Saudi consulate after Khashoggi was videotaped entering October 2 with his fiancee waiting outside. The Turkish government has put forward evidence that the security officials, a polite description for men suspected of torture and extrajudicial killing, went into the consulate from which Khashoggi was never seen exiting and that some of this unit are close to the Saudi leader, Crown Prince Mohammed bin Salman.

And remember Trump famously chose to see Mohammed bin Salman, or MBS as he is known, on his very first diplomatic trip as president. He even joined in a traditional Saudi sword dance as if he was part of the tribe.

And it’s getting  harder to think President Trump is not part of a tribe of autocrats around the world who use populist rhetoric to divide and rule. He certainly seems to find an unusual alliance with several of the world’s most brutal autocrats whether it is “MBS” or North Korea’s Kim Jong Un for whom Trump has quite literally professed “love” despite a record for extrajudicial killing  and oppression that earns him a place as one of the world’s worst violators of human rights; or the Philippines’ President Rodrigo Duterte, who has carried out street justice by having armed thugs kill some 12,000 civilians in the name of a ‘drug war’ without anything close to due process; or the Egyptian President Abdel Fattah el-Sisi, who like his Saudi allies, has also deployed a police state to lock up journalists and opposition leaders ever since he restored the military junta in Egypt in 2013 and overthrew the first democratically elected leader in 3,000 years of Egyptian history.

Oh, and not to mention the president’s perplexing coziness with and dark attraction to Russian President Vladimir Putin, a relationship that now sits in the cross hairs of the ongoing investigation by the Special Prosecutor Robert Mueller and that has already resulted in indictments and guilty pleas from top campaign officials and senior advisers to the president.

So as we follow the details of this investigation into the murder of Khashoggi, please be aware of what is at stake. I joined many journalists in going to Khashoggi because he had reported on bin Laden during his rise to prominence and he had developed deep knowledge of how a particular brand of Wahhabi Islamic militancy, given countenance by Saudi Arabia for decades prior, was turning its sites not only against America but against the House of Saud. When I told him I was going to rent a car and just drive on Highway 15, Khashoggi helped me. He feared I might be arrested as I didn’t really have official permissions from the Saudi Ministry of Information to do this, but he generally supported my effort to take the risk to get at the truth. He was on the side of truth.

Ten years after my reporting for the Boston Globe in Saudi Arabia, I returned to the kingdom as the co-founder and editor of GlobalPost, with one of our most senior correspondents, Caryle Murphy, to report on the 10th anniversary of the attacks and to assess the House of Saud at a pivotal time in its history. Murphy had an unusual three-year visa to Saudi and was living in Riyadh, developing deep knowledge of what was unfolding inside the country. And, again, both Murphy and I knew that Khashoggi would be a logical first stop in understanding where the country stood amid the tumult of the so-called Arab Spring which was unfolding throughout the region and which had resulted in toppling several autocrasts.

“We in Saudi Arabia still need a larger dose of tolerance,” said Khashoggi, a former newspaper editor who was then just starting up a forthcoming 24-hour all-news satellite television channel owned by Prince Al-Waleed bin Talal, one of the world’s richest men and a stalwart of the pro-modernizing wing of the ruling family but who is very much on the outs with the Crown Prince. It’s important to note that  bin Talal was one of the Saudi princes who MBS locked up under house arrest at the Ritz Carlton and, like some scene of the Arab version of The Godfather, refused to release them until they paid hundreds of millions of dollars in what MBS felt were ill-gotten proceeds from the oil-rich kingdom.

“I still want more (change), especially in the war against the ideas which breed intolerance and extremism,” added Khashoggi during an interview where we spoke with him on the 57th floor of Kingdom Tower, Riyadh’s sleek, iconic landmark built by Prince Al-Waleed.

“For example, it is not enough to preach against using violence against foreigners and at the same time you allow a preacher to say you should hate non-Muslims.”

So looking through the lens of Khashoggi’s role as a journalist in Saudi Arabia, it appears they’ve killed the messenger.

And now, based on the news cycle today, it looks like they’re going to smear the murdered messenger to justify $110 billion in arms deals between the US and Saudi Arabia, a ‘business’ relationship that Trump has openly referred to in his calculations around how to handle the US response if it is determined that the House of Saud is responsible in this murder.

Welcome to the craven, transactional foreign policy of Donald Trump where he has consistently downplayed the role of the House of Saud in the apparent murder of Khashoggi . And now the far-right personality cult forming around Trump is stepping up attacks on the Saudi dissident journalist himself. On Fox News and elsewhere there is a new campaign to highlight his past reporting on and youthful connections to Islamist movements, to help mollify the mounting evidence that Khashoggi was beheaded and dismembered inside the Saudi consulate in Istanbul for daring to challenge the tyranny and human rights abuses by the Crown Prince himself.

It is very much worth noting that Trump chose this week, amid the intensifying investigation into Khashoggi’s presumed murder, to lead a rally once again with a dog whistle for attacking a free press. On Thursday at a rally in Montana, Trump openly praised Rep. Greg Gianforte (R-Mont.) for physically assaulting a reporter in his bid for Congress last year.

I believe that’s true, those who attack journalists, are indeed Trump’s kind of guys. The question that we as a country need to ask ourselves is whether this is who we are? Are Trump and MBS, Putin, Duterte, el-Sisi and Kim — and any other populist autocrat who bullies or locks up journalists who dare to question their reign — our kind of guys?