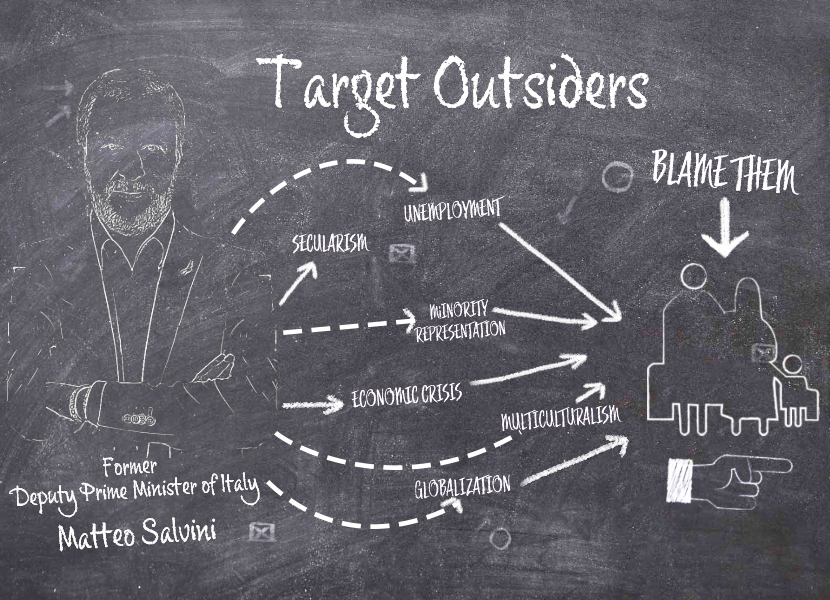 Editor’s note: This dispatch, published jointly with The Atlantic Magazine, explores another aspect of “Target Outsiders” a tactic from The Authoritarian’s Playbook.

The movement argues for what it says are traditional values. But to gain momentum, it must grapple with a paradox.

MILAN — The annual meeting of the League appears at first to be a casual affair: Supporters of the far-right Italian party gather in Pontida, a small town north of Milan, milling around barbeques, drinking beer, chatting, and singing. It looks more like a festival than a political conference. The politicians who attend—and all senior League officials do—are easily approachable and willing to talk (to activists, if not journalists).

For the League’s members, it is like a pagan Christmas—those who were naughty over the course of the year are relegated to the background, while those who were nice are feted onstage, crowds chanting their name as they deliver a speech, each speaker more important than the last. The final address always goes to one man: Matteo Salvini, the party’s leader since 2013. And this year he is honoring Luca Toccalini.

Just 29, Toccalini has served in Italy’s Parliament for more than a year but has been coming to these meetings since he was a teenager. Back then, his ambitions were decidedly more humble: aiming to be the cashier of a small restaurant in his hometown, where his two best friends would work as cooks. He became involved with the League (then a regional party called the Northern League) only after he was handed a flyer on the street, and the relationship soon deepened. At this latest annual conference, Salvini would name him national coordinator for the party’s youth department.

It is an influential post, responsible for organizing and campaigning. Yet the connection between the two men also carries a powerful symbolism: If Salvini, Italy’s former interior minister and deputy prime minister, is at the forefront of the far right’s current ascendance in Europe—its most famous face, according to fellow populists—then Toccalini points to the movement’s future.

He and others like him represent a growing movement of young activists in Italy and across Europe who identify not as the far right, or even as nationalists, but as identitarians, concerned primarily with the preservation of what they believe to be their societies’ long-held identities. They promote Christian values against what they claim is the forced Islamization of Europe; heterosexual families rather than gay marriage or even civil partnerships; and local traditions as opposed to mass migration. Across the continent, from Eastern Europe to France and from Greece to Scandinavia, these identitarians have loudly proclaimed their presence, perhaps nowhere more so than in Italy, and perhaps none more so than Toccalini himself.

As a concept, identitarianism is not new, yet the label’s use in conversation is far less prevalent, and the word itself much less clearly defined, than terms such as nationalism and populism. It encompasses an array of politicians and movements that seek to highlight the plight of “an ignored, marginalized, oppressed, disenfranchised or otherwise nonintegrated segment of society,” the journalist Kathleen Parker wrote in The Washington Post. Think mottos such as “America first,” “Italy first,” and “My native region first.”

In Europe, this movement has found its intellectual foundation in The Great Replacement, by the French sociologist Renaud Camus, which argues that native-born Europeans are being outnumbered in their homeland by a new kind of rootless citizen. Proponents of identitarianism whom we spoke with argued forcefully for a Europe made up of several smaller countries that each celebrate their own identity. 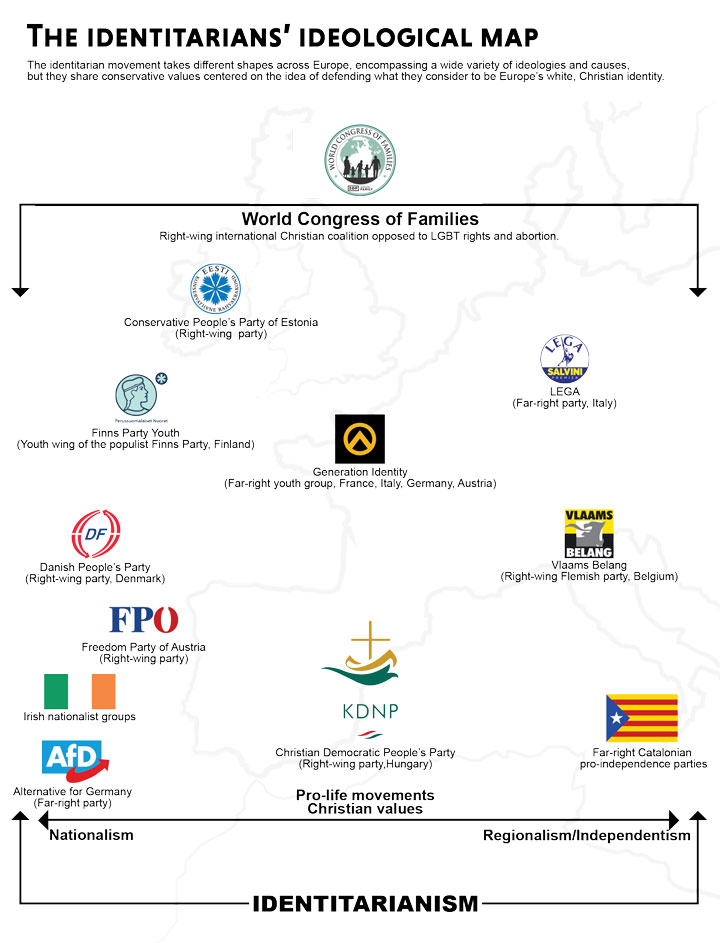 Yet individual identitarian movements across Europe contain a paradox. Their goal is clear: to hollow out or curtail the power of Europe-wide institutions such as the European Union, which they blame for the loss of traditional values. But to achieve it, to protect these local identities, they must build transnational momentum.

Italy and the League offer an example of what values underpin identitarianism, and the factors that help it flourish. Since the League’s founding in the 1980s, it has consistently advocated for the decentralization of power from Rome. In its early years, the party’s events included an array of rituals inspired by Celtic myths and referenced a mythical place yet in narrow policy terms, the League argued mostly against fiscal transfers from Italy’s wealthy north to its poorer south. As a result, the party had limited geographic reach.

Salvini’s leadership has changed that. The League has gradually adopted a more identitarian outlook, making changes both minor (its motto has gone from “Northern Italy first” to simply “Italy first”) and major (railing about transgressions against the notion of the “traditional” family). The party has also openly questioned previously settled issues of Italian history and identity; League politicians told us that they identified more with Europeans who settled in northern Italy during the early Middle Ages than with the Roman empire. “The first centuries of this era are where our nations mainly come from,” one League official, Lorenzo Fiato, said. And Salvini has changed his rhetoric too—in 2012, during the European debt crisis, Salvini (then a local councilor in Milan) said that he wanted to maintain the euro in northern Italy “because we are Europe,” but argued that southern Italy couldn’t “afford” to remain in the common currency. More recently, he has at times left open the question of whether a Salvini-led Italy would continue within the euro area.

All the while, the League has built support, polling at various points this year as the most popular party in Italy. Salvini won a cabinet post, and the current government—a coalition of a populist anti-establishment party and an old-fashioned center-left grouping—exists largely for one reason: to keep him out of power.

Along with those more active reasons, from changing its messaging to building around a strong leader, circumstances in Italy have also given room for the movement to grow. The country has lacked a traditional center-right party for years, arguably since the political demise of former Prime Minister Silvio Berlusconi, and has seen the populist Five Star Movement become the senior member of the country’s coalition government, while no mainstream center-left bloc has been able to capture a plurality of votes. All of this has left a vacuum that the League has capitalized on.

These various factors culminated in Italy’s latest regional elections, in October, in which a League-led coalition won 57 percent of the vote in Umbria, in the center of the country and by no means a historic League stronghold. It marked the first time the region would be without a leftist governor in decades. The League’s message during its campaign? It advocated traditional values while criticizing the EU and the rules faraway officials had imposed on Italy—an identitarian message.

For now, the League’s success rests largely with Salvini: The party had no notable nationwide profile before he took over, and he appears likely to remain in charge for the foreseeable future. This is true for an array of leaders of similar movements in other countries, such as Jaroslaw Kaczynski in Poland and, farther afield, Jair Bolsonaro in Brazil.

But as the League embraces an identitarian message, one it believes will resonate across Italy, people such as Toccalini will be the ones who determine whether it survives past its current leadership. The meeting in Pontida suggests that he may be a worthy successor.

Even as a child, Toccalini was no stranger to politics—his grandfather, a communist, was for a period after the Second World War the mayor of their hometown, Basiglio. But Toccalini today is more a descendant of Salvini’s, something Toccalini openly acknowledged to us, referring to the League as his “second family” that has offered him “most of the values [he has] been following” for more than a decade. He also echoed Salvini’s rhetoric—leftists, he said, “speak like communists, but when it comes to labor and economic policies, they act like they are from the right,” an argument that mirrored what the League’s leader has said on multiple occasions.

To be sure, Salvini remains the party’s bankable star, the most recognizable politician in Italy, and that was clear in Pontida. During his speech, the crowd treated him like a rock star, cheering as he energized them with statements against mainstream European leaders such as French President Emmanuel Macron and German Chancellor Angela Merkel; Italian politicians who want to reverse his efforts to curb migration; and even his former coalition government partners, the Five Star Movement.

But Toccalini showed talents of his own. As he took over as the head for the League’s youth arm, the crowd began chanting, “Luca is one of us!” Salvini then gave him a tight hug, enshrining him as the next in line. As if to pay tribute, Toccalini grabbed the microphone. “Long live the League!” he yelled. “Long live Matteo Salvini!”

A version of this story appeared as “The ‘Identitarians’ Are the Successors to Europe’s Far Right” on The Atlantic on Dec. 27, 2019