‘It was… devastating’: The Akron Innerbelt destroyed Black-owned businesses in its path 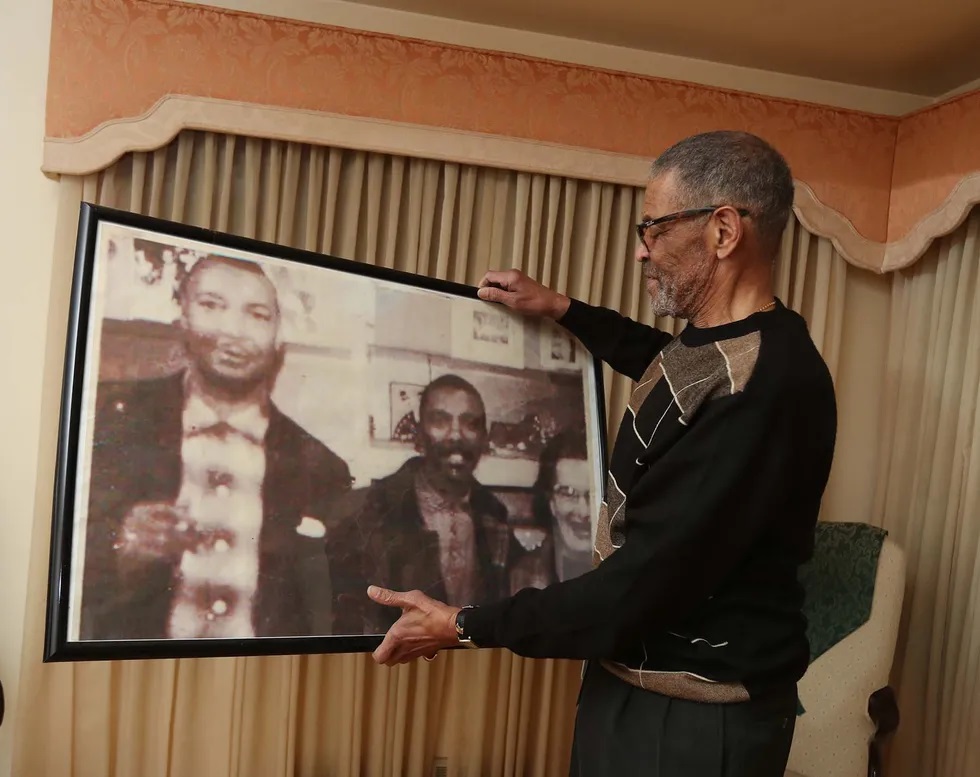 Homell Calhoun Jr. holds a photograph of his father Homell Calhoun Sr., left, posing for a photograph with jazz great Jimmy Smith in the Calhoun Record shop, a store started by Calhoun's parents. The Wooster Avenue shop was was shuttered to make way for the Akron innerbelt. (Photo by Karen Schiely for the Beacon Journal)

The mistakes of the past are guiding discussions about the future of a 30-acre decommissioned stretch of the Innerbelt in the heart of Akron. The Akron Beacon Journal explored the history of the innerbelt and the impact that those decisions had on the community.

Related: The failed Akron Innerbelt drove decades of racial inequity. Can the damage be repaired?

He had been shining shoes at the store since was 8, but as he got older, his father trusted him to open Calhoun Record Shop on Sunday mornings. Black pastors, churchgoers and other Akron community members would spill into the shop to get their shoes shined. They’d browse through the selection of gospel, soul, funk and blues, and talk about goings on around town.

“It was amazing because it kind of lit the whole block up,” Calhoun said of the family business. “If you really wanted to know what was happening, what was going on, that’s where you came — the record shop. … It was really the place to be. Plenty of gossip,” he laughed.

Homell Calhoun Sr. opened the shop in the late 1940s at the urging of his wife, Rebecca, who worked in record stores in Detroit and knew how to run the business. Calhoun began by repairing phonographs and soon the family was ordering inventory from Stax Records in Memphis.

The record store was the family’s main source of income, and it saw a lot of traffic.

Everything you needed — from grocery stores, tailors, bars, doctors and more — could be found on Wooster Avenue (now Vernon Odom Boulevard), a center of Black commerce in Akron.

When the ill-fated Akron Innerbelt was constructed in the 1970s, it tore through a predominantly Black neighborhood and displaced at least 737 households. The road also forced many mom-and-pop businesses to relocate. Many of the displaced businesses never recovered or reopened.

More than 100 businesses, many of which were Black-owned, were shuttered.

In 1969, in an area that had been Akron’s epicenter for the racial tension that swept across America the year before, Mayor John S. Ballard acknowledged the impending demolition of buildings on Wooster Avenue from Edgewood to Rhodes avenues that housed 20 Black-owned businesses.

City officials at the time said it would be too difficult and cost an extra $4 million to reroute the Innerbelt to bypass the Wooster Avenue businesses.

All but three small buildings on that stretch of Wooster Avenue were demolished. Lost were the Star Wooster Market, the Zanzibar bar, Calhoun Record Shop, a cocktail bar, H & A Restaurant, Reddick Shoe Repair and an apartment house with a barbershop.

“All are Negroes, some in business for the first time, who replaced white businessmen who had previously operated in the area,” the Beacon Journal noted at the time.

Ward 3 Councilman Ed Davis, the first Black person to be elected to Akron City Council in 1957, expressed his worry about the fate of their investments. The city would compensate the property owners when it seized their buildings, but most Black business owners on Wooster Avenue were renters.

Calhoun Jr. doesn’t recall his father receiving any relocation money for the record shop. But he remembers the toll the closure of the business inflicted on his father.

“I feel bad for my dad because that’s all he had ever known. And the thing about it is, that place — everybody knew him,” he said.

After they lost the business, his mother went to work at O’Neil’s department store. His father hustled to make ends meet, renting and repairing jukeboxes, pinball machines and pool tables for businesses. He later transferred records onto cassette tapes and sold them.

“That was a way of survival. That kind of kept us afloat … But it was never like it was before,” Calhoun said. “But a lot of other businesses went astray. … It was kind of devastating,” he said.

Joe the Tailor, Reddick’s Shoe Repair, Miss Rockefeller’s bakery and other businesses along Wooster Avenue and in the neighborhood never reopened.

“I just wonder what would have happened if things had still been there,” he said.

Seeing his dad’s shop being taken away from him also made Calhoun hesitant to start his own business.

“I’m going to tell you what really influenced me … I saw Daddy work hard with that, and I saw what happened, as hard as he worked for it. So I said, ‘Well, I better take a different route,’ get me a job and stay on because you never know what the economy or the government, the city is going to do. So you need a backup, a little stability,” he said.

Lack of capital made relocation tough

The amount the city paid out to business owners when it seized their buildings through eminent domain was insufficient, and those who could afford a down payment in a new neighborhood faced ongoing discriminatory lending policies.

Relocated businesses also had to build new customer bases in other neighborhoods, away from their loyal clientele.

“I’m not aware of any of them surviving,” Lieberth said. “I just don’t know. I can’t think of one that did.

“Urban renewal pretty much destroyed that whole neighborhood,” he said.

A 1940 Akron Negro Directory points to more businesses that formerly stood in the path of what is now the Innerbelt.

“There was a lot of economic interaction and economic development that took place as a result of those businesses that really stimulated a lot of economic activity,” Malcolm Costa, CEO of Community Action Akron Summit, said of Wooster Avenue and Howard Street.

“As a result of the demographic changes and the businesses closing, there was a lot of wealth and income that was lost,” he said.

“[The] major portion of the Innerbelt neighborhood has become a low-income, black-majority area, with an increasing number of substandard buildings. The black proportion of the population in two census tracts has surpassed 90% in the past 15 years. … Business has also declined greatly. For example, at the end of the completed freeway section only one small cafe remains. In the entire neighborhood only a few businesses remain along the line of freeway construction,” Kendrick wrote.

In addition to destroying the businesses that lay in its path, the construction of the Innerbelt also resulted in people and jobs moving outward and away from the city to the suburbs, Akron’s urban planner Jason Segedy told the Beacon Journal.

Wealthier Black families who could afford to move to other places after highways bisected their neighborhoods did so, said Eric Avila, an urban planning professor at UCLA. Those who stayed behind were left with declining job prospects.

“Highway construction fueled the disappearance of jobs in the cities, which left these neighborhoods bereft of any kind of economic opportunity,” Avila said.

The closure of Black-owned businesses also meant the loss of role models who could inspire Black youths to pursue their own entrepreneurial dreams.

The 72-year-old, whose own family was displaced from their Damon Place rental because of the Innerbelt, remembers his friend’s father, Mr. Polk, opening a gas station at 744 W. Bowery St. eight years before the Innerbelt was built.

Polk sold the business a year before the Innerbelt was built when he heard about the plan to construct the highway.

“Everybody on the west side who was anybody came through that gas station. I used to go down there and help work, and just kind of hang out,” Keaton said.

As one of seven siblings in a single-parent household on Damon Place, Keaton found business role models at the gas station and an extended family in the close-knit neighborhood.

“The majority of the people in the neighborhood that I was growing up in, at that point in the ’60s, their fathers were in the homes. My mother and father were never married, but I always had my friends, and their fathers were my role models,” he said.

By the time the Innerbelt came through West Akron, two other major urban renewal projects had already divided and demolished large portions of the neighborhood: Grant/Washington and Opportunity Park. These projects redeveloped predominantly Black neighborhoods, which city planners had characterized as being “blighted,” for residential and commercial use.

The collective impact of the Innerbelt and other urban renewal projects displaced many small Black-owned mom-and-pop stores in residential areas and entertainment venues along major thoroughfares like North Howard Street.

After performing in popular venues like the Green Turtle Hotel, the Cosmopolitan, Benny Rivers and the High Hat, among others, the superstars stayed at the Black-owned Mathews Hotel at 77 N. Howard St.

“Howard Street, in its heyday, the late ’60s … It was like Harlem, because it was just so thriving, there was so much action. It was so exciting,” Costa said.

Though the clubs catered primarily to Black audiences, the strip offered a rare respite from an otherwise segregated Akron. White and Black performers, club managers and audiences mingled in Akron’s own Harlem.

Black entrepreneur George Mathews opened and operated the Mathews Hotel from 1925 until 1978. The hotel, which was featured in the Negro Motorists Green Book, a popular African American guidebook during the Jim Crow era, was razed along with other businesses on the strip in the 1970s and 1980s to make way for urban renewal projects.

By 1982, the former Ritz Hotel — now the LGBTQ+ friendly Interbelt Night Club — was the only business left standing in the area.

As the city of Akron discusses what to do with the 30-acre stretch of vacated highway it acquired last fall, Costa and Calhoun urged city leaders to encourage economic growth and activity in the surrounding neighborhood.

“That area and the community still suffers from … the crippling design of the Innerbelt,” Costa said.

“One of the things that I think really ought to be looked at, personally, is ways to straighten some of that out … so that some of the streets that were at one time thoroughfares can be made thoroughfares again, and that will provide greater access and opportunity for such things as businesses to develop,” he said.

“Businesses will naturally and organically develop if there are people who are able to reside in those areas, and there are opportunities for coming together.”

Calhoun wants officials to consider the needs of current residents, who lack access to basic amenities like grocery stores in their neighborhood.

“People still live there,” he said.

Seyma Bayram is a Report for America corps member covering Black, immigrant and marginalized communities for the Akron Beacon Journal.

This story was published with the support of a fellowship from Columbia University’s Ira A. Lipman Center for Journalism and Civil and Human Rights. 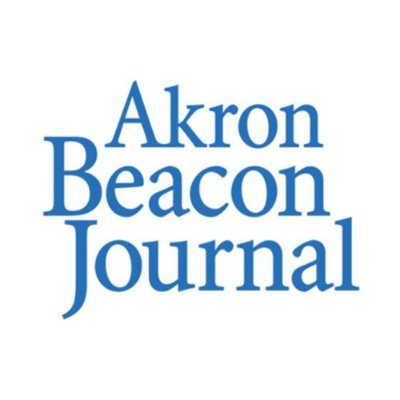 A version of this story appeared on AKRON BEACON JOURNAL on February 3, 2022