Is the US military funding both sides of the Afghan war? 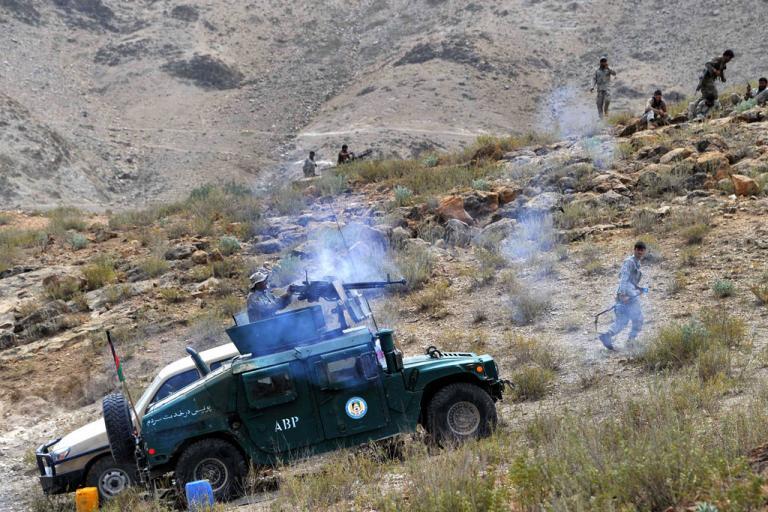 KABUL, Afghanistan — It seemed like such a good idea at the time.

At a staff meeting in 2006, Lt. General Karl Eikenberry, who was then Commander, Combined Forces Afghanistan, took a sip of imported water, looked at the bottle, and said, “There must be a way of producing bottled water in Afghanistan.”

Thus was born the concept of Afghan First, a policy of preferential treatment for local companies that has now placed up to 80 percent of military procurement in the hands of Afghan vendors. Everything from fuel delivery for the Afghan army to the production of winter socks for the Afghan police is now given to a variety of local contractors, who are pocketing hundreds of millions of dollars per year from the U.S. military, under the Combined Security Transition Command-Afghanistan, CSTC-A for short.

“We are building this country,” said Sgt. Edward Gyokeres, chief of the Public Affairs Office at CSTC-A.

But, paradoxically, they may also be building the insurgency: according to those inside the system, a significant portion of that Defense Department funding ends up in the hands of the very enemy the United States is battling in Afghanistan — the Taliban. In a series of interview with contractors, military personnel and others who work inside the system, GlobalPost found almost no one who expressed surprise at the phenomenon.

“U.S. military procurement funds going to the Taliban — duh,” is how one military official put it, speaking privately.

Procurement officers working for two different companies with large CSTC-A contracts shared their stories; three military officers commented on the procurement process. The head of the non-governmental organization that matches contractors to funders also weighed in, as did numerous ordinary Afghans and foreigners more tangentially associated with the process.

All agreed: payoffs do occur, are almost impossible to track, and will be extremely difficult to stop. As with U.S. assistance funds, a percentage of which find their way to Taliban coffers, military procurement money is a major source of financing for the resurgent Taliban.

“ISAF (International Security Assistance Force) is aware of allegations that procurement funds may find their way into the hands of insurgent groups, but we do not directly support or condone this activity, if it is occurring,” said Col. Wayne Shanks, Chief of Public Affairs for the U.S. Forces in Afghanistan (USFOR-A). “While rigorous contract award and oversight processes exist, the relationships between contractors and their subcontractors, as well as between subcontractors and others in their operational communities, are not entirely transparent.”

“Not entirely transparent” may be a bit of an understatement, according to one contractor who worked for an Afghan firm with a wide range of CSTC-A contracts.

“Everything was done in cash,” he said, speaking on condition of anonymity. “There is no way of tracking where the money is going. There are no controls on payments. The military does not follow up or check on [Afghan] companies the way they can U.S. vendors.”

This is the rule, rather than the exception, where Afghan companies are concerned, say those closest to the process, with the result that money can be easily diverted.

“Of course we pay off the Taliban,” said one procurement director for an Afghan company that imports fuel for the military. “What is the alternative?”

There are few viable options for those who work in the widening area of Afghanistan that is under Taliban control. Those who do not pay up front end up bearing even greater costs in cash or blood. Contractors often tell the story of one transportation company that refused to pay – it lost 800 trucks before it bowed to the inevitable.

The amounts involved are far from negligible. According to the procurement director, who spoke on condition of anonymity, when fuel comes into the country from Central Asia it costs approximately $1.00 per liter.

By the time it reaches a military base in Kandahar or Tirin Kot, in the volatile, dangerous, Taliban-controlled south, the price has gone up to $1.60 — billed, of course, to the U.S. military. A modest portion — between $.10 and $.20 — goes to the company as profit; the rest, or more than 30 percent, goes for “security” — which means handouts to the Taliban to allow the shipment through.

It adds up. According to Mike Capstick, head of Peace Dividend Trust, an organization that matches Afghan companies to international donors, the value of military contracts given to Afghan companies last year alone was $1.1 billion.

If, as insiders say, between 10 and 20 percent is being siphoned off to the Taliban, then funding from the U.S. military would rival the narcotics industry as a source of revenue for the insurgency.

“I think it is important to note that the ISAF and our international partners are taking a broad-based approach to identify and close vulnerabilities that criminals, including the Taliban, use to raise, store, and move funds,” Shanks said. “We work closely with our Afghan partners to take action against specific people involved in financing of the Taliban, and to build Afghan capacity in strategic areas, like internal audits, to better track budget and procurement flows, as well as to improve overall security conditions with the help of the Afghan National Security Forces.

Shanks pointed to a series of recent military operations aimed at capturing or eliminating insurgents and their supporters.

Attempts are also being made to track and control the “hawala” system, a traditional financial structure in this part of the world that does not admit easily to regulation.

Hundreds of thousands, perhaps millions, of dollars are moved through hawala every day. The procedure is simple, and virtually untraceable. The customer brings his money, in cash, to a hawala trader at a central market. The broker takes a percentage, then makes a phone call to a partner in London, Cairo, New York or Sydney, who dispenses the requisite amount in cash to a designated recipient.

In Kabul, the government has distributed forms to hawala traders, and is requiring that they fill them out for every transaction. This also means that the hawala trader would have to pay taxes on all his profits.

“Of course we do not record everything,” snorted one broker. “We record a percentage — usually for those businesses that are all legitimate and above board. We do not register the rest.”

The major customers for hawala, according to the broker, are those dealing in drug money and those with major international contracts.

Cracking an internal Afghan system from the outside is no easy task.

“Afghans know how to get things done here,” said Capstick, from Peace Dividend Trust. “They can seal a deal with a handshake.”

But the Afghan way is all too often mired in corruption and nepotism, traits which have made the country the fifth most corrupt nation in the world, according to Transparency International’s most recent annual index. In a country where the rule of law is more a distant dream than a present reality, giving the Taliban a cut of the funding is not seen as treason – it is merely expedient.

“We delivered fuel to all the provinces, and the only way of accomplishing that was by greasing the Taliban,” the contractor from the Afghan firm said.

Between 10 and 20 percent of the proceeds were paid out to ensure security, he added. The overall amounts were staggering.

“I went to Camp Eggers to collect unpaid invoices,” he said, referring to the U.S. military base in the center of Kabul that houses CSTC-A. “For three weeks we were owed $16 million.”

The U.S. military is trying its best to build in checks and balances to keep the process honest.

“All ISAF agencies check potential contractors and organizations to ensure that money is not going directly into the hands of known terrorists,” Shanks said.

But none of the procedures in place can hope to catch or counter the built-in payments to the Taliban.

“There is no line item for bribes,” CSTC-A’s Gyokeres said. “That’s not to say it doesn’t happen.”

According to Lt. Col. Mitchell S. Appley, commander of the Kabul Regional Contracting Center, the military keeps a list of close to 4,000 Afghan vendors.

“The policy, basically, is if there is an Afghan vendor available, we should give them preference,” he said. “New rules and regulations allow us to restrict competition to Afghan only.”

The contracting system is long and complex, with multiple layers of bureaucracy designed to ensure transparency.

First a potential vendor is vetted by Peace Dividend Trust, which checks the organization’s registration, does a site visit to make sure that it is a legitimate company, and helps its Afghan officials to negotiate their way through the military procurement system.

The military concede that there is much they cannot control.

“Corruption is a possibility,” Gyokeres said. “But our job is to administer the contracts fairly and objectively.”

For those working inside the system, this desire to remain above the fray amounts to a willful refusal to see what is going on.

“They say ‘just get it done,’” the procurement director said. “They do not seem to want to know too many of the details.”

A former international military officer explained why CSTC-A may be feeling a bit overwhelmed.

“Someone from above is pushing on the soft spot in their forehead and telling them to get the contracts out,” he said, speaking privately. “There is a lot of pressure on the military procurement system.”

“That is the way things happen,” he said. “It is not easy to start with nothing and then create a functioning infrastructure; some latitude is required. But this ‘don’t ask don’t tell’ policy has evolved to such an extent that Taliban funding is fully baked into the system. It stands to reason that the insurgency can now forecast revenue and accurately budget for combat resources based on lucrative contracts from the U.S. military, which were intended to rebuild their war-torn country.”