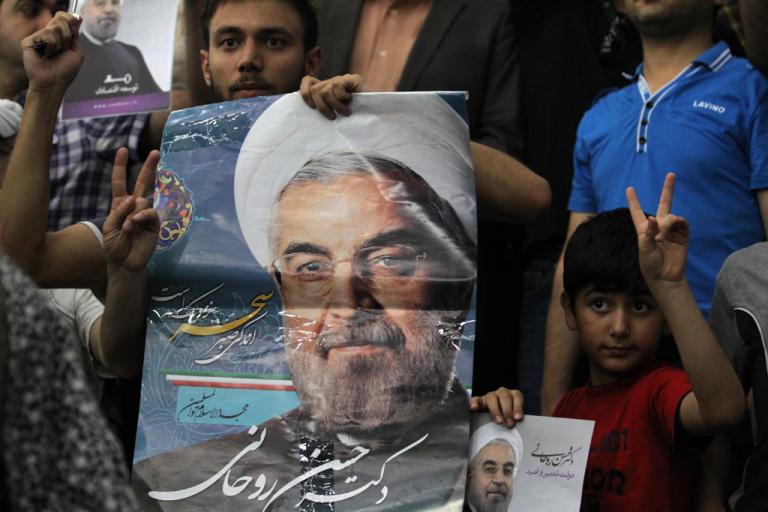 Iranian supporters of President-elect Hassan Rouhani gather at the mausoleum of the founder of Iran's Islamic Republic, Ayatollah Ruhollah Khomeini, in Tehran on June 16, 2013, during a visit for Rouhani to the mausoleum. Rouhani hailed his presidential election win as a victory over 'extremism' as jubilant supporters took to the streets, pinning their hopes on an easing of Western sanctions. - ((Atta Kenare/AFP/Getty Images))

TEHRAN — The election of moderate presidential candidate Hassan Rouhani has raised hopes here of lifting the crippling US and western European sanctions against Iran.

Rouhani has indicated he wants a settlement with the Obama administration — but on Iran’s terms. He and other Iranians argue that sanctions mainly hurt ordinary people.

In his first press conference after winning the election on June 15, Rouhani said, “We don’t want further tension. Both nations need to think more about the future and try to sit down and find solutions to past issues and rectify things.”

Though 131 members of the US House of Representatives last week signed a letter urging Obama to renew diplomatic efforts with Iran, Congress is also considering new legislation that would place additional sanctions “on everything from mining and construction to the Islamic republic’s already besieged oil industry,” the AP reported.

And Sen. Lindsey Graham told a conference hosted by the Christians United for Israel this week that, “If nothing changes in Iran, come September, October, I will present a resolution that will authorize the use of military force to prevent Iran from developing a nuclear bomb.”

Despite the most crippling sanctions in the history of Iran, the government has shown no signs of changing position on its nuclear enrichment program — which it says does not include plans to build nuclear weapons. Government leaders appeal to the Shia tradition of resistance in efforts to rally the public against outside powers. They argue that the sanctions have backfired and actually generated solidarity among Iran’s Shia allies.

“People in the Shia countries, and around the world, want the sanctions lifted,” said Mohammad Sadegh Janansefat, a prominent economist and editor of Industry and Development magazine. “The sanctions aren’t working. The Islamic Republic isn’t giving in.”

The US and some western European countries have imposed a series of increasingly stringent economic sanctions in an effort to stop Iran from enriching uranium and building nuclear weapons.

US intelligence agencies admit that Iran does not have a nuclear weapons program, but they fear its current nuclear enrichment facilities could generate bomb-grade fuel at some time in the future.

Officially, US sanctions target Iranian leaders and key industries, not ordinary people. US Undersecretary of State for Political Affairs Wendy Sherman told the US Senate, “US regulations contain an explicit exception from sanctions for transactions for the sale of agricultural commodities, food, medicine, or medical devices….”

She went on to say, “We have demonstrated that supporting the Iranian people and pressuring the policies of their government are not mutually exclusive.”

That’s not how Iranians see it.

Every weekday many dozens of people wait in long lines at the 13th of Aban, a government-run pharmacy that is their last stop to find drugs in short supply. One man unable to fill his prescription shouts angrily as he stomps out.

“A lot of people are angry when they can’t get their medicine,” Yusuf Abadi noted. He was waiting to get a chemotherapy drug and asked that his real name not be used.

Tahereh Karimi, a woman standing in the same line, knows that officially, pharmaceuticals are excluded from the sanctions. But, she said, the US government puts the squeeze on ordinary people in hopes they will pressure the government.

“The US knows what it is doing,” Karimi said. “Tell Obama not to hurt ordinary people.”

Since the US imposed stringent sanctions 18 months ago, the Iranian economy has been in free fall. Oil revenues dropped by 50 percent, the local currency has lost as much as 2/3 of its value and inflation hit 40 percent. The drop in the rial’s purchasing power makes importing foreign drugs and medical devices particularly expensive.

In addition, the US has threatened international banks with severe penalties if they break the sanctions. So while banks are supposed allow fund transfers for medicine and medical devices, many find it easier to ban Iranian transactions altogether.

“We can’t get certain vitamin tablets because we can’t send money abroad through the banks,” said Khodadad Asnarshari, administrative director at the Sapir hospital in Tehran.

“Bank hesitation is understandable given that a mistake could earn a bank the wrath of the US Treasury Department and fines that exceed $1 billion,” according to an authoritative study of sanctions issued by the Woodrow Wilson Center.

Pharmacy owner Ghader Daemi Aghdam said even affluent Iranians in north Tehran are struggling to pay the high cost of medicine. “I estimate 30 percent of my customers walk out when they see the cost of filling their prescriptions,” he said.

The impact of sanctions on poor Iranians is even more severe. Sapir, a Jewish charity hospital, serves all faiths but mostly working class Muslims in south Tehran

Dr. Asnarshari said the cost of imported medical equipment, such as endoscopes, has increased five times since last year. “We hear that the US doesn’t want people to suffer, but we are.”

For example, cancer patient Abadi was unable to find his chemotherapy drug Mabthera at any hospital or private pharmacy.

In 2011 Mabthera cost the equivalent of $70 for a 100 ml dose. Eight months worth of treatments cost $840. Today the price has gone up 17 percent but it’s extremely hard to find, even at that price.

So Abadi and other patients often take a walk down Nasser Khosro Street.

The massive thoroughfare, not far from the city’s famous Bazaar, is crowded with midday shoppers. Traffic is clogged with cars, motorcycles and pedestrians all trying hard not to collide with each other.

Within a few minutes of walking down the street, a young man whispers, “medicine?” He and dozens of others operate like drug dealers, which they are. They just sell drugs for chemotherapy, diabetes and other hard-to-find pharmaceuticals.

The dealers aren’t educated men and may or may not be familiar with the requested drug. The patient usually provide a prescription.

This day Abadi’s chemo drug is available, but at three times the official cost.

“Our drugs are of the finest quality,” claimed the dealer with the polished confidence of a used car salesman. “All the drugs are from Europe.” He said the pharmaceuticals are smuggled from Iraq and Iraqi Kurdistan, usually in people’s luggage. It’s impossible to determine the age or quality of drugs, and patients take real risks when making purchases.

Black market medicine existed for decades in Iran. It began during the horrific years of the Iran-Iraq War (1980-88). Back then Iran faced US sanctions as well as massive wartime shortages. Black market medicine wasn’t in high demand again until recently, according to the street dealer. After US and European sanctions were tightened in December 2011, business picked up. “With the new US sanctions, we see more demand,” he said.

Analysts say that not all the medical shortages can be attributed to sanctions. Inflation was a serious problem in Iran long before the intensified US efforts.

Iran has a system of subsidies that are popular among ordinary people. The government keeps gasoline priced at only $.50 per gallon. Each individual, including children, gets a cash subsidy of $36 per month at the official exchange rate.

Unlike government investment in job-producing enterprises or infrastructure, cash subsidies only drive up inflation, according to economist Janansefat. The government is always playing catch up as inflation erodes real income.

“The government can’t raise its own employees’ salaries enough, nor can the private sector,” he said. “So workers are caught in a squeeze.”

The cash subsidies had populist appeal until inflation sapped their value.

One businessman, who asked to use only the first name Abbas, said he deposits rials at an account with a money changing store in Tehran. The store works with a partner business in Dubai, which converts rials to dollars and then wires the money to foreign suppliers. The process is reversed when the Abbas sells his products abroad.

The currency shop makes money converting currency and charging for the wire transfers. In turn, shop owners must pay off Iranian officials in order to stay in business.

“Some people are getting very rich off the sanctions,” said Abbas, “while most people are suffering.”

Whatever the role of mismanagement and corruption in causing shortages, in the view of most Iranians, the sanctions have made their lives much worse. Even during previous years of high inflation, prices for drugs and medical devices didn’t skyrocket as they have today.

In numerous interviews ordinary Iranians couldn’t understand the logic of the US position on Iran. State Department official Sherman said, for example, “We will not allow Iran to obtain a nuclear weapon, and there should be no doubt that the United States will use all elements of American power to achieve that objective.”

Since Iran has no nuclear weapons program, asks newspaper reporter Nasser Mardhoukhi, “why pick on us?”

Imam Hussein ibn Ali is one of the most revered figures in Shia Islam. The 7th century political and religious leader refused to accept the rule of another dynasty. He was killed resisting outside oppressors during the famous Battle of Karbala.

Shias cite the bravery and martyrdom of Imam Hussein as a model for fighting oppressors today. Shias commemorate his death each year with the Ashura holiday, where Shia men flagellate themselves to show self-sacrifice.

“We have to fight the invaders,” said Mardoukhi. “Sanctions are a form of warfare. The sanctions make people miserable.”

Mardoukhi and others stress that opposing sanctions is a political, not a religious issue. But their religion inspires them to resist US pressure, he said. He conceded that, at least in the short run, sanctions are likely to continue.

The US is hypocritical for allowing Israel to have some 200 nuclear weapons while punishing Iran that has none, he said.

“Ayatollah Khamenei issued a fatwa [religious decree] prohibiting making a nuclear weapon,” said Hazrati. “We would never do something that is haram [forbidden].”