Iranians quietly question their government’s role in Syria and beyond 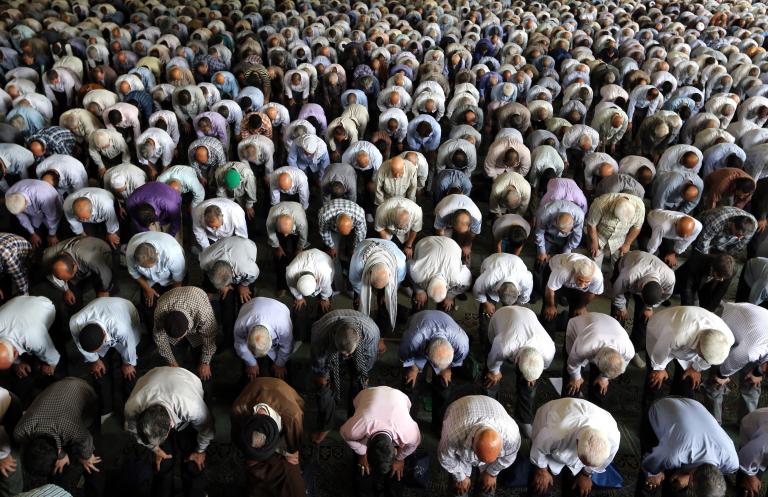 TEHRAN, Iran — Iran’s decision to sign the Vienna nuclear agreement has opened up a wide discussion on formerly taboo topics. For the first time in years some Iranian intellectuals — both reformists and conservatives — are cautiously raising questions about Iran’s foreign policy.

Some are criticizing previous government decisions related to the 1979 takeover of the US Embassy, duration of the Iran-Iraq War and high cost of Iran’s nuclear program. Iran’s support for Syria’s President Bashar al-Assad is also up for discussion, according to Mohammad Pirali, managing editor of the conservative newspaper Siasat-e Rooz (Politics Daily). Iran provides the bulk of Assad’s armaments, as well as military advisors.

“If Assad would have given people more political freedom, these matters would not have happened,” he said, referring to the widespread rebellion against the Syrian government and subsequent civil war. Speaking of Assad’s limited attempts to open a dialog with some opposition groups, Pirali said, “He’s trying to open up politics now, but it’s very late.”

While some intellectuals are willing to speak openly, much of the criticism is made behind closed doors. Challenging the government on foreign policy can be dangerous, though military losses by a number of Iranian allies are emboldening more voices.

“Open criticism of Assad, Hezbollah or Hamas is forbidden,” said Saeed Laylaz, a prominent reformist who was jailed for one year in 2009.

Iran and its allies have faced serious military setbacks in recent months. Sunni rebels in Syria have seized areas once controlled by Assad, who oversees a secular dictatorship that enjoys support from Alawites and Shia Muslims. In Iraq, the Islamic State continues to occupy areas once controlled by the pro-Iranian Iraqi government. And a Saudi-led war in Yemen has driven Iranian-backed rebels out of the country’s second largest city, Aden.

Iran, a Shia-majority country that has forged strong alliances with Shia groups, sees itself as defending the oppressed in the Muslim world, whether Shia or Sunni. But Pirali admits that Iran faces major problems because of a perception that it only supports Shia movements. So Iran has unintentionally alienated Sunnis, according to Pirali.

“We should have supported all Muslims, all different branches,” he said. “But we’ve supported groups that made others oppose us.”

Officially, Iranian foreign policy doesn’t support Shia against Sunni. Iran instead portrays itself as fighting US imperialism and Israeli aggression.

Of course Sunni and Shia have religious differences, says Mohammad Masjed Jamei, a former Iranian ambassador to the Vatican, who now teaches at the Foreign Ministry’s School of International Relations. He compares Muslim doctrinal splits to those dividing Catholic and Orthodox Christians.

“The danger comes when people politicize the differences,” he said. Iran does not promote sectarianism, he argues, but Saudi Arabia does. As the region’s leading Sunni power, Saudi Arabia promulgates the Wahhabist interpretation of Islam, which demonizes Iran and all Shia.

“They claim that Iran wants to create a new empire, and Shia are not Muslims,” said Masjed Jamei.

The US backs Saudi Arabia because of its oil wealth, Masjed Jamei said. From the 1950s through the 70s, the US used the Saudis to combat leftist and nationalist governments in the region. Then in the 1980s, the Saudis and the US backed ultra conservative mujahideen fighters, who ousted the Soviet Union from Afghanistan. The Saudis then spread Wahhabism throughout the Muslim world, which included support for al Qaeda in various countries, according to Masjed Jamei.

He argues that the US backed Wahhabism with no understanding of the long term implications. “The US accepted Saudi Arabia without researching the religious issues very well,” he said.

While Saudi Arabia does indeed support extremist groups in Syria and elsewhere, Iran promotes its own brand of sectarianism as well.

Iran rallies supporters with calls for Shia to defend the faith. It justifies sending Iranian military advisors and Hezbollah troops to Iraq and Syria by claiming they are protecting religious shrines. Many ordinary Iranians see these wars in sectarian terms: Shia fighting Sunni.

And, as with the US troop deployments in the Middle East, Iran soon experienced mission creep. In Iraq the Iranians expanded their military presence in 2014 after the Islamic State captured Mosul and other areas. Iran threw support behind Shia militias, providing arms and training.

But loosely organized and undisciplined militias also attacked Sunni civilians. They kidnapped and murdered Sunnis suspected of ties with the Islamic State. Those attacks had serious political consequences, says the magazine editor Pirali.

“Wherever we supported only one group, it has ruined unity and brought instability,” he said. Iran doesn’t intentionally  incite Shia against Sunni, he said, “but what we’ve done may have caused Sunnis to oppose us.” He claims Iran is now in the process of fixing this error by supporting other Muslim groups.

But a close examination of Iranian policy in key countries calls that assertion into question:

With the overthrow of Saddam Hussein’s regime in 2003, the US got rid of one of Iran’s worst enemies. Saddam had invaded Iran in 1980, and the two countries fought a bloody, eight-year war.

Shia and Kurdish political parties that had opposed Saddam lived in exile in Iran for years. Their leaders later became members of parliament, prime minister and president. Iran continued economic, political and military support to those parties and their respective militias. Ironically, the US occupation produced a government more friendly to Iran than to the US.

In 2011 the US withdrew its troops from Iraq as agreed in the Status of Forces Agreement signed by President George W. Bush and the Iraqi government. Iran didn’t want the Shia-dominated government to fall, according to Foad Izadi, an associate professor of world affairs at the University of Tehran.

“It looks like Iran was helping Shia,” he said. “But in reality, that is not what Iran wanted to do.”Continued fighting in Iraq doesn’t help Iran, he argues. “Iran wants to make sure its neighbor is peaceful. Iran wants to sell a lot of goods and services to Iraq. You cannot do that when there’s chaos.”

Religious scholar Masjed Jamei adds that “Iran wants to protect shrines at Karbala and Najaf. Today there may be some Shia who kill Sunnis, but it was responding to attacks.”

However, Sunnis in Iraq certainly don’t view Iran that way. Many think that Iran controls the Baghdad government. Sunnis see Iran as helping their own sect, admits Professor Izadi. “The perception was exactly that.”

Iran backs Assad in Syria’s civil war for geopolitical, not religious reasons. Syria was the only Arab country to support Iran during the Iran-Iraq War. Assad joined Iran, Hezbollah and Hamas in opposing the 1993 Oslo Peace Accords between Israel and Palestine. Syria allows Iran to transport arms to Hezbollah across its border with Lebanon.

Iran blames the US and Saudi Arabia for the rebellion against Assad, ignoring the initial popular movement that rose up against him. Seyed Mohammad Marandi, an associate professor of world studies at the University of Tehran, said some Iranians have soured on Assad. But most “believe they made the morally correct choice” in backing Assad’s forces. “Despite all the problems, they are infinitely better than ISIL [the Islamic State] and al Qaeda.”

In Syria, he said, “The prisons are crammed full and there is no more room, so they have seized a few stadiums to fill them up too. The Syrian people are experiencing harsh conditions. On the one hand, they are bombed with chemicals by their own government, and on the other hand, they can expect American bombs.”

In March of this year, Saudi Arabia launched a bombing campaign against Houthi rebels in Yemen, backed by some Sunni countries and the US. More recently, troops from the United Arab Emiratesdrove the rebels out of Aden and some neighboring areas. The Saudis argue they are fighting Iran’s plans to dominate Yemen, even claiming Iran wants to conquer the Saudi holy cities of Mecca and Medina.

The rebel Houthi group, whose members are mostly from the Zaidi sect of Shia Islam, receive political support from Iran.

Mostafa Zahrani, director general of the Foreign Ministry’s think tank, the Institute for Political and International Studies, says the support is not tied to the Houthis’ religion.

“We decided to be on the side of the people,” he said. “That’s why we have influence. Millions support the Houthis.” The Saudis accuse Iran of sending arms to the Houthis, a charge denied by Zahrani.

He argues that Iran’s role is exaggerated by Saudi Arabia in order to justify their war. “Yemen has not been strategic for us,” he said. “The war there has a long history, which doesn’t have much to do with Iran in the first place.”

But critics say Iran has the made the same mistakes in Yemen as elsewhere in the region. “We only supported Shia,” noted magazine editor Pirali. “That’s what brought the Sunnis against us.”

When accused of exclusively supporting Shia groups, Iranian officials point to their aid of the militant group Hamas in Palestine. As part of the “Axis of Resistance” fighting Israel, Iran provided political, economic and military support to Hamas, which is Sunni.

Hamas set up its political headquarters in Damascus in 2001 with backing from Syria and Iran. But relations soured since 2011 when Hamas sided with the popular uprising against Assad in Syria. Hamas began as the Palestinian offshoot of Egypt’s Muslim Brotherhood. It supported the Muslim Brotherhood of Syria in calls for the overthrow of Assad and holding elections, which the Syrian brotherhood may well have won.

By 2015 Iran had cut off all aid to Hamas in Gaza, even as Palestinians suffered extreme hardship. Friction grew as Hamas sought to replace Iranian and Syrian support with aid from Arab gulf states and, most recently, Saudi Arabia.

Iran stepped up support for Islamic Jihad, a Sunni group that mostly operates in Gaza. One opinion poll showed Islamic Jihad had only 13 percent support among Palestinians. It is best known for periodically launching rockets from Gaza into Israel.

Iran has had difficulty explaining its relations with Hamas. At first it argued that Meshal didn’t really represent Hamas’ views on Syria. When other Hamas officials clearly expressed the same stand, Iran had to concede there is a major split between the two.

The country’s leadership does not seem likely to change its foreign policy in the near future. But the willingness of some Iranians to publicly criticize aspects of that policy is an indication of deeper ferment.

* From 1979-80 Iranian students seized the US Embassy and held 52 American diplomats hostage. The crisis has disrupted US-Iran relations ever since. Khadir asked, “Why did they keep the US hostages for 444 days?”

* Iraq invaded Iran in 1980. But by June 1982 Iran had recaptured Iranian territory initially seized by Iraq. When the war ended in 1988, neither side has made any military gains, but Iran suffered many dead and wounded. “Why did the war last eight years?” asked Khadir.

* And more recently, Iran has spent tens of billions of dollars to develop its nuclear power program without every revealing the cost. “Why was there 10 years of nuclear power buildup, and how much did it cost?” asked Khadir.

Critics asking these questions consider themselves supporters of the 1979 Revolution and the Islamic government. They want to see meaningful change in that system. And they want to see an end to Iran’s alienation from the Sunni Muslim world.

So far, however, they are only asking questions and raising mild criticisms. To fully answer them would require questioning the leadership of Supreme Leader Ali Khamenei, a red line few Iranians are willing to cross. A full reevaluation is not expected anytime soon.

GroundTruth special correspondent Reese Erlich received a grant from the Pulitzer Center on Crisis Reporting for his Iran coverage. His latest book is “Inside Syria: The Back Story of Their Civil War and What the World Can Expect.”